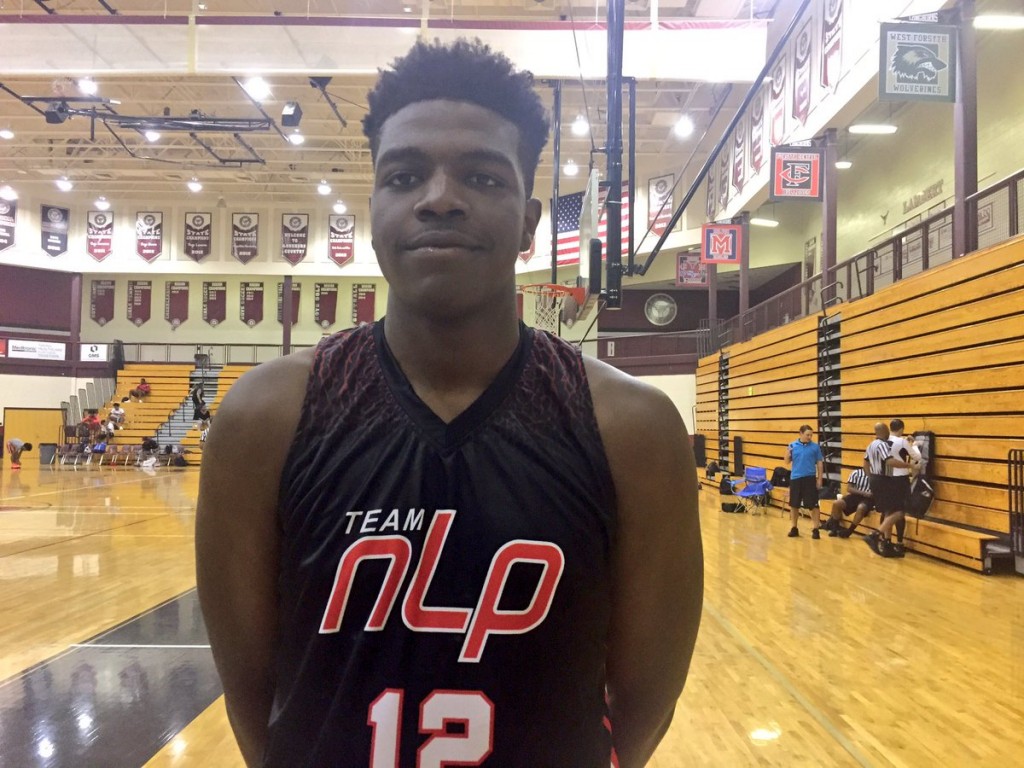 Lambert High School was the scene for a lot of highly competitive 17U games to open the Bob Gibbons Tournament of Champions. Players and teams were trying to start their tournament off right with good pool play wins. Here are a few notes from the night that was:

There were a lot of good point guards on display in the 17U divisions of Gibbons. Louisville Magic’s Andrew Taylor, Pro One Select Navy’s Fabian Bell, Team South Carolina’s Grant Singleton, Atlanta All Stars’ Alex Jones, and the Stackhouse Elite duo of Dalvin White and Dequarius Nicholas both performed very well. Fabian Bell and Grant Singleton matched up against one another for what may have been the best matchup of the night.

Bigs Made a Statement

While the point guards were very good on Friday night, the bigs made their case as well. Team NLP center Jason Jitoboh (pictured) was a force in the paint at a big-bodied 6-foot-10 and showcased great hands and touch around the rim. Florida and Auburn have both offered the Hamilton Heights big man. Stackhouse Elite duo Amari Kelly & Augustine Ominu were both factors in a blowout win. Kelly has become one of Georgia’s more popular prospects in April with offers from ECU, UNO, Wofford, and Detroit. Ominu is a very good athlete and is very difficult to keep off the glass with his activity level.

Making a Case as Contenders

Do you like impressive team efforts? Those came in droves on Friday night. Team NLP may be the biggest team in the 17U Orange division. They do not have a player smaller than 6-foot-3 and they play a full court style that is very problematic for other teams. Jason Jitoboh and wing KK Curry are high major prospects that are surrounded by other great athletes who provide big contributions.

The Louisville Magic have had a big run of success on the Adidas Uprising circuit, not losing a game on the first two stops. They continued that success behind the efforts of Steven Fitzgerald, Andrew Taylor, and Jayden Scrubb and looked like a sure fire contender and will be a tough out in the tournament.

Stackhouse Elite had the largest margin of victory tonight, looking very impressive in the process. They have tons of size with forwards Amari Kelly, Augustine Ominu, and Cory Hightower. Throw in some guard play from Dalvin White, Dequarius Nicholas, and others and you have a team that can beat you in a number of different ways.

Jason Jitoboh, Team NLP (pictured): The big man was a force in the paint and will be a very difficult matchup as the weekend continues. He is tough to keep out of the paint and finishes plays very well at the rim.

KK Curry, Team NLP: Curry played on the wing and on the ball and was more playmaker than anything else. He was able to make plays for teammates and was electric in transition.

Jayden Scrubb, Louisville Magic: Mr. Versatility. He played every position one through four and made some very athletic plays and shot the ball well from the perimeter.

Steven Fitzgerald, Louisville Magic: Fitzgerald was a bully getting to the rim where he finished with contact. While he did not have the jumper connecting, he was able to fill the score sheet by attacking and being aggressive.

Grant Singleton, Team South Carolina: Probably the best defender that I saw on Friday. He is also a very good ballhandler and is quick to beat his defender and get into the paint to score and find teammates.

Fabian Bell, Pro One Select Navy: Bell did everything he could for Pro One Select. He ran the show, scored in the paint, rebounded, and defended. He has loads of toughness and will be a guy to watch this weekend.

Amari Kelly, Stackhouse Elite: Kelly has transformed his body and increased his skill level. He is very good on the block and in the midrange and with his size and abilities, he is a very difficult cover. No wonder why he has become a popular MM prospect in Georgia.

Adrian Cohen, Atlanta All Stars: Cohen’s energy made the difference for the Atlanta All Stars while they struggled early. He was able to get deflections defensively creating opportunities in the open floor, where he finished well at the rim.

Adam Flagler, Atlanta All Stars: Flagler scored the ball well from all three levels and made some tough jumpers. He has shot the ball well all spring and has raised his stock a lot over the last few weeks.

Arturro Bingham, SR1 All Stars: Bingham is a very interesting prospect with good size and a lot of length on the wing. He is tough to stop from getting to the rim and plays with a lot of instincts. He could be a sleeper throughout this tournament.