#ATLJAM Top 16U Performers part I 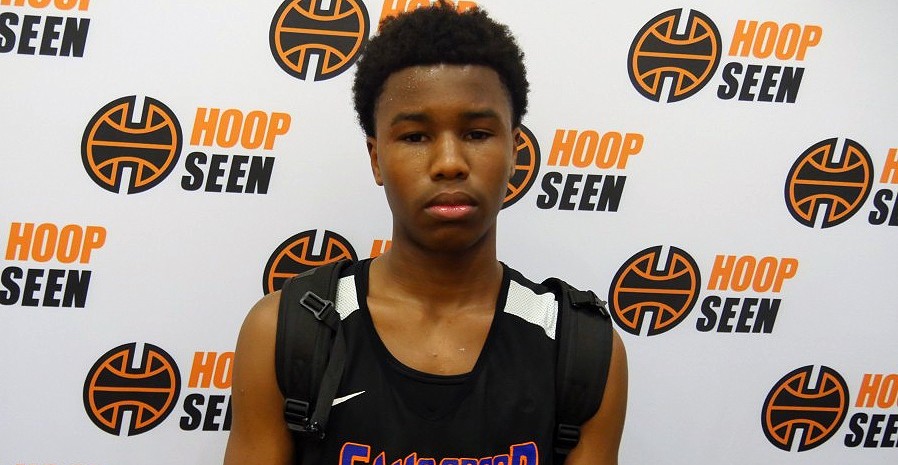 We continue our look at the top performers from the 2017 HoopSeen Atlanta Jam and today we dive into the 16 and under division of the event. There were a number of talented young players in the field

Yussif Basa-ama, Wade Elite, PF/C, 2020: The long-armed 6-foot-9 youngster was an anchor inside for Wade Elite. Still new to the game of basketball, Basa-ama’s mobility and soft touch around the basket are two traits hard to teach. He runs the floor well and on the glass, does a great job of rebounding and keeping the ball high. He finished everything in front of the rim, including tough angles where using the backboard wasn’t an option. Once he adds weight and gets more seasoning, Basa-ama has a chance to play at a high level. – Kyle Sandy

Kenan Blackshear, NSB Game Speed Elite, F, 2019 (pictured above): What an impressive young prospect he is. The 6-foot-6 forward was a do-a-little-bit-of-everything kind of player over the weekend for NSB Game Speed Elite. He was one of the most difficult players to guard all weekend long, regardless of age group. His older player is 6-foot-10 and plays at Virginia Tech. The younger Blackshear is more skilled than his brother was at the same age. He’s also more versatile. Don’t be surprised to see his name shoot up the recruiting conversations over the next couple of years. He's very intriguing. - Justin Young

Paul Hudson, Charlotte Dragons, SF, 2019: The Charlotte Dragons put together a successful weekend in the 16U division and Hudson caught the eye of several people in attendance. A skilled 6-foot-6 lefty, Hudson impacted the game in a variety of ways, but nothing was more impressive than his passing ability. The point-forward type prospect has phenomenal vision and passing ability for his size, as he set up teammates for several easy buckets. Hudson is an intriguing prospect with some upside to his game. Don’t be surprised to see mid-major programs tracking him during July. - Garrett Tucker

Terrell McDonald, North Alabama Elite Stars, SF, 2019: From start to finish, McDonald was one of the most productive and efficient players in the 16U division. He consistently averaged a double-double, but the highlight of his weekend was a 30-point, 10-rebound outing on Saturday. Shortly after the game, North Alabama extended a scholarship, according to his AAU coach. With his strong and compact frame, McDonald is relentless at attacking the rim and is nearly impossible to handle going downhill. He made plays at the rim throughout the weekend and was also a valuable defender for the Stars. - Garrett Tucker

Dee Merriweather, Memphis Prep, SG, 2019: What a scorer he is. The Memphis East guard patiently waited his turn this high school season and has unleashed his inner scoring beast on the travel circuit this spring. Merriweather was a major point producer during his time at the Atlanta Jam. He’s built like a running back and he’s fast enough to be a problem as a wing-to-rim attacker. As we look ahead to the 2019 class in the Deep South, he’s going to be one of the best scorers we’ve seen up to this point. He’s a good scorer and plays with strength. Expect good things to come moving forward for the Memphis guard. - Justin Young

Leslie Nkereuwe, AC Georgia, 2019, PF: Nkereuwe is still a work in progress, but there’s already so much to like about the athletic 6-foot-7 forward. Quick off his feet and with extreme length, the sophomore is a terror on the defensive end. He was one of the best shot-blockers in the 16U division and made his presence known from the tip of each game. Nkereuwe has a knack for finding loose balls, whether it is off rebounds or balls on the floor. Nkereuwe plays with a motor, and, with an endless amount of upside, he will be an intriguing player to chart as the travel season carries on. - Garrett Tucker