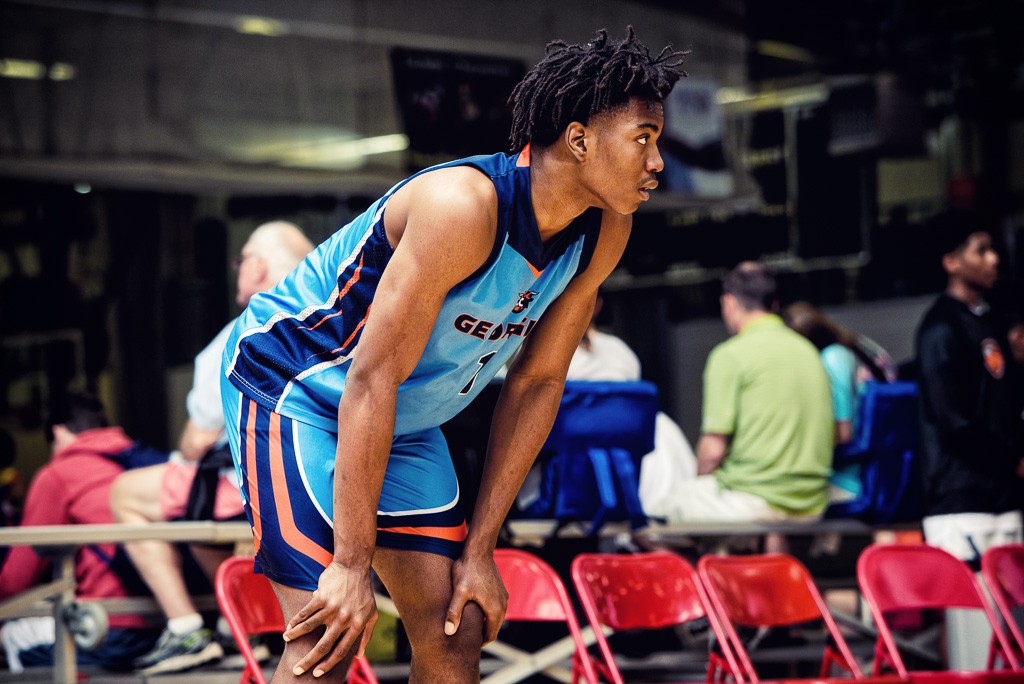 Kalu Ezikpe, AC Georgia, 2018, PF - The 6-foot-7 forward was easily the best big man in the entire tournament. The Lawrenceville (GA) Discovery post player was just too big and too strong to contain at the Atlanta Jam. Ezikpe was the trending prospect on coaches row and drew a big crowd every time he stepped onto the floor. His offensive game is at it’s best when he is anchored in the paint but he is continuing to improve as a face up jump shooter. Ezikpe was probably the best rebounder at the event. He played above his shoulders and started the break quite well. Ezikpe is one of the best mid-major big men in the entire South. He justified such an opinion over the weekend. - Justin Young

Tye Fagan, Middle Georgia Supersonics, 2018, SG - After a sluggish start to Atlanta Jam, Tye Fagan found his grove in a major way. In front of Georgia State, Middle Tennessee State, Western Carolina, Arkansas State, USC Upstate and South Florida on Saturday, Fagan torched Team Power with 38 points, seven rebounds, three assists and two blocks including the game-winning drive with six seconds left.  Fagan’s outside shot was calibrated and when it’s on, it opens up more driving lanes as defenses must step out and respect his jumper. On Sunday, Fagan did it again with Georgia State head coach Ron Hunter and College of Charleston lead man Earl Grant in attendance, going for 33 points. Overall a strong weekend for the Middle Georgia Supersonics star. – Kyle Sandy

Alex Jones, Atlanta All-Stars, 2018, PG - I made a bold claim on Saturday that Alex Jones is Georgia’s best true point guard for the 2018 class. With a state championship ring in tow and a handful of offers, I think he is legitimately in the discussion. A true pass-first point guard, Jones makes everyone around him better. Whether he was spoon feeding Ralueke Orizu inside or hitting Adam Flagler on the perimeter, Jones was racking up the assists and making life easier for his teammates. His overall steady play led to a Lipscomb offer this weekend. At 5-foot-10, his lack of size may hurt his recruitment at the higher levels, but Low Majors and Mid-Majors already see the value in Jones. He holds offers from New Mexico State, Presbyterian, Stetson and Florida Gulf Coast while Charlotte and South Alabama have been in to see him this Spring. Navy, Presbyterian and Lipscomb are all on Jones’ docket to visit this summer. – Kyle Sandy

Jamir Moore, SOH Elite, 2018, SG - No one, and I mean no one, saw this one coming. Moore was the breakout guy of the Atlanta Jam. The Miramar (FL) guard was one of the best scorers at the event. Moore averaged 24.6 points a game, hit 20 three-pointers over the course of five games and helped his SOH Elite team claim the 17U Black Atlanta Jam bracket. It was a statement weekend for the South Florida guard. Sure, he was a threat on the wing and you had to guard him but he was also a terrific rim attacker. His ball-handling was strong and reliable. His versatility was his strength. His recruitment needs to take shape after this weekend. Moore was outstanding.

Nelson Phillips, Warner Robins All-Stars, 2018, SG - The Warner Robins native was my most valuable player at the 2017 Atlanta Jam. He did so much from so many places for his team. Outside of being one of the most competitive players in the field, he relished in the big match-ups. Phillips was a fantasy basketball superstar. He racked up production in every category. He scored. He defended. He rebounded. He passed. He handled the ball. All of the boxes were checked. The 6-foot-4 senior-to-be has been one of the most impressive players at our events this entire spring. He left a lasting impression with the coaches that were there to see him. - Justin Young

Tekorian Smith, Team Penny, 2017, SG - What a weekend for the Memphis guard. The 6-foot-4 senior was a major point producer. He is a slasher supreme and one of the toughest players to defend in the tournament because of his quickness, athleticism, strength at his position and constant movement and activity. Smith helped Team Penny bring home the title and he mixed in a couple 30-point games along the way. After a junior college stint, don’t be surprised to see Smith’s name pop up with mid-major plus programs. - Justin Young