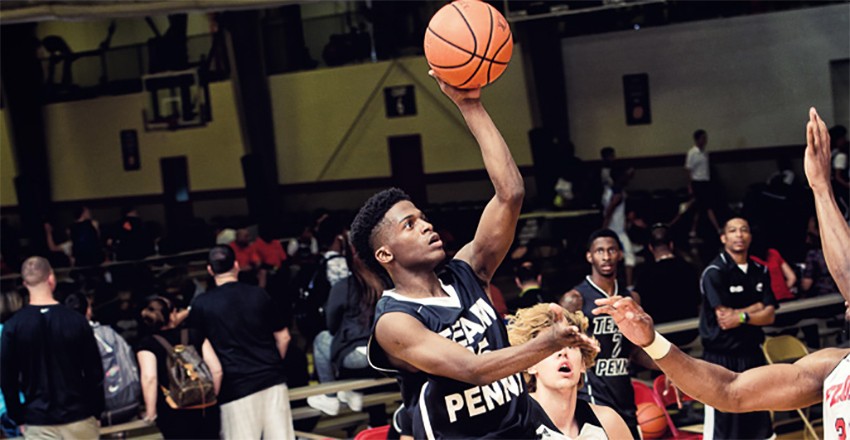 We continue our look at the top performers from the 2017 HoopSeen Atlanta Jam. There were a number of players at the 17 and under level that stood out in front of the college coaches that were in attendance. This is our third instalment of our top performers series.

Kendall Cotner, Pro One Select White, PF, 2018: Cotner still has a ways to go in his development, but wow! The 6-foot-8 power forward has endless potential and upside to his disposal. Cotner solidified himself as one of the top defensive players at the #ATLJam with his shot-blocking ability. The junior gets off his feet quickly and has a knack for timing the ball going up. He’s still learning the game and a little rough around the edges on offense, but Cotner is an ideal prospect to go to Junior College for two years and become a coveted player by Division I programs after. - Garrett Tucker

Elochukwu Eze, Florida Elite, C, 2018: As the event grew older, Eze’s game grew stronger. The rough and tumble big man was a load to play against for the opposition over the weekend. There wasn’t a lot of push back when it came to comparable size in the paint. Eze made it look, well, easy. That said, his hands and footwork could still use some development. Low-major schools that were in attendance were intrigued by his game and saw the end-of-the-road prospect that Eze can become. Keep his name on your watch list. The time spent between now and July are clutch to his recruitment. - Justin Young

Kavion Hancock, Team Penny, SG, 2017 (pictured above):  Like his teammates on Team Penny, Hancock proved himself as an electric scorer at the Atlanta Jam. Hancock averaged 18.3 points a game during the tournament. Hancock had the best first step of any player in the tournament. He’s a blur with the ball and attacked the rim time and time and time again. Hancock used every bit of his 6-foot frame to attack bigger guards and challenge their defensive abilities. The Memphis native should be a quality scorer at the junior college or prep school level this fall. - Justin Young

Gregory Holloway, Middle Georgia Bucks, F, 2018: Often overlooked at Westside-Macon High School, Gregory Holloway was a standout for the Middle Georgia Bucks. At 6-foot-6, Holloway brings a versatile skillset to the table. He is physical when attacking the rim and boxing out, but also has some finesse when it comes to stretching the defense. With more opportunities likely to come his senior year, Holloway could be in line for a major uptick in production. – Kyle Sandy

Brandon Thomas, Team Power, SG, 2018: Need a tough shot maker? Look no further than 6-foot-3 sharpshooter Brandon Thomas. Thomas shot the ball very well from 3 and was one of the most efficient scorers in the event. The junior hit plenty of shots throughout the course of the weekend, but they weren’t all simple. Thomas also proved he has no problem hitting shots with a hand in his face. At his size, Thomas can also be a productive all-around player on defense and on the boards. Kennesaw State is his only offer but that could change sooner rather than later. - Garrett Tucker

Cameron Woodall, Mississippi Hawks, F, 2018: Woodall burst onto the scene Friday night with his freak-athleticism and brute force on the floor. A 6-foot-6 overpowering forward, Woodall was a mismatch nightmare for opposing teams with his athleticism, quickness, and explosiveness. He bullied smaller players on the perimeter and was too much to handle for post players in the paint. Once Woodall gets going downhill, he’s nearly impossible to stop. He had no problem finishing through contact around the rim and was one of the most impressive above-the-rim athletes. - Garrett Tucker