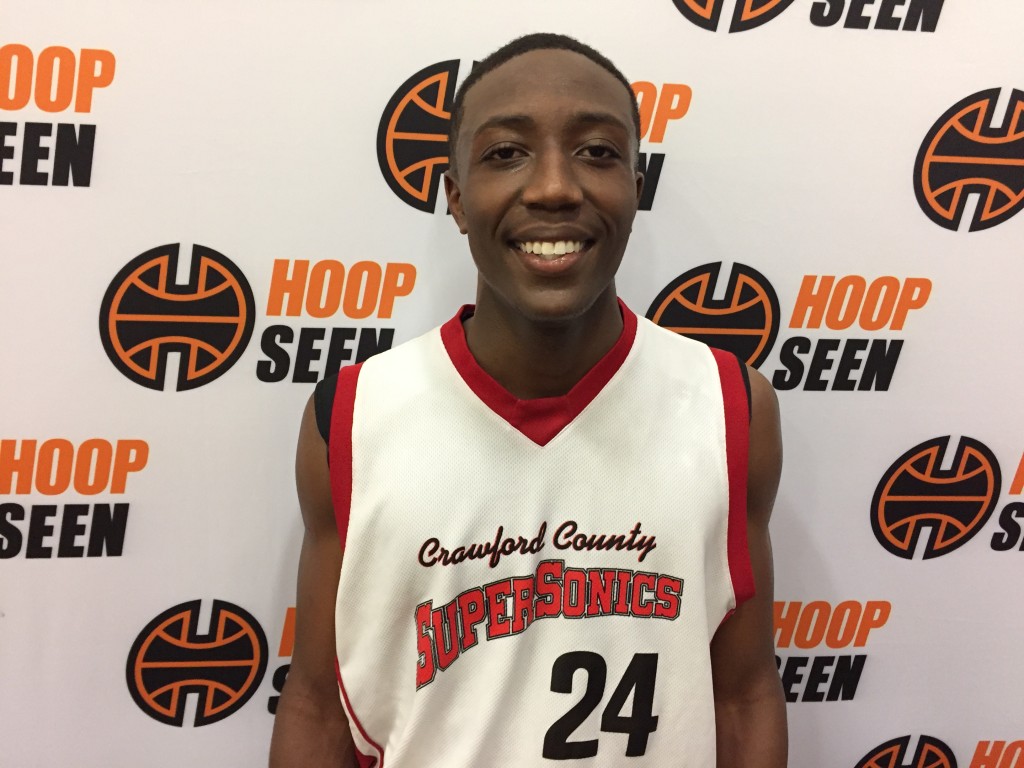 Tye Fagan (pictured) and Nelson Phillips were up to their old tricks on Court 4 today. The Middle Georgia Supersonics snuck past Team Power 61-59 behind a monstrous Fagan effort. In front of Georgia State, Middle Tennessee State, Western Carolina, Arkansas State, USC Upstate and South Florida, Fagan piled on 38 points, seven rebounds, three assists and two blocks while scoring the game-winner on a drive baseline with six seconds left. He carried the Supersonics past a red-hot Brandon Thomas who drilled four threes and finished with 19 points, seven rebounds and three assists.

The Warner Robins All-Stars fell in overtime to AC Georgia 59-56, but it wasn’t any fault of Nelson Phillips and Jacolbey Owens. Phillips crafted his way to 22 points, six rebounds, five assists, four steals and two blocks. His running mate, Owens, took advantage of the spotlight drawn by Phillips and had quite the night for himself in front of Navy, Georgia College, Georgia State, Western Carolina, Charlotte, William & Mary, Jacksonville and USC Upstate. The aggressive point guard had 15 points, five rebounds, five assists, three steals and one block.

All for one and one for all

AC Georgia got contributions from up and down the roster in their win over the Warner Robins All-Stars. Kalu Ezipke was physically dominant inside when he got touches, but he missed the final seven minutes or so after going down with a head injury. His night was over early with 12 points and five rebounds. He was held out for precautionary reasons.
With Ezipke down, JaQuavius Hayes stepped up with nine points and seven rebounds, knocking down the go-ahead three in overtime. Unsigned senior shooting guard Phil Cirillo had 11 points and KJ Jenkins netted 11 as well.

South Florida Elite shared the sugar in their 66-50 win over a shorthanded Smyrna Stars. Guards Deante Moore (20) and Kenneth Lucien (17) combined for 37 points as they took advantage of a worn-down Stars group and attacked in transition. Big man Reece Wilkinson was a load inside for SFE. At 6-foot-9, 230 pounds, Wilkinson carved out space and used his thick frame to move defenders. He put in 13 points, grabbed nine rebounds and blocked two shots. He lists North Florida, Florida Gulf Coast and Florida International as having shown interest. Wilkerson hasn’t taken any official visits but has been on FGCU’s campus numerous times.

The Atlanta All-Stars cruised to a 70-35 victory Saturday night. The maestro of the offense was none other than Buford state champion lead dog, Alex Jones. What Jones doesn’t have in size, he makes up for with his court savvy. The pinpoint passer is a true floor general who makes his teammates better. He finished with eight points and seven assists in front of a handful of college coaches.