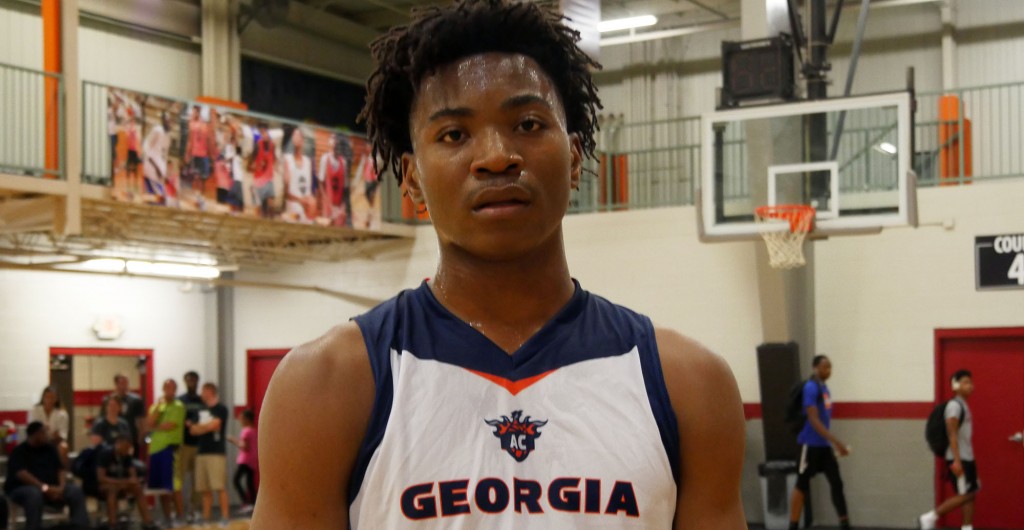 SUWANEE, GA — The Atlanta Jam tipped off with a bang as college coaches from all levels filled the baselines at Suwanee Sports Academy as the second weekend of the April NCAA Live Period tipped off.

The college coaches came out to see 2018 PF Kalu Ezipke (pictured above) and the AC Georgia big man is justified their spot on the sidelines. With his play.

Ezipke was just too big and too strong for High Point to handle. He bullied his way around the rim for buckets, played well as a rebounder and defender. But Ezipke wasn’t satisfied.

“That was one of my worst games,” he said after the game.

Expect big things to come this weekend? You better believe it.

His teammate KJ Jenkins also shined on the big stage. The class of 2018 guard was doing what he does the best - hit the three-pointer. The Canton (GA) Creekview guard hit four triples and played very well at the point guard position.

Collins Hill big man Chris Parks and 2017 PF Jacq Hayes were having their way inside for AC Georgia against High Point Havoc. They combined for 20 points in the win.

High Point Havoc shooting guard Cameron Whiteside was impressive in defeat. The class of 2018 guard from North Carolina was getting buckets on the big stage. We’ll keep a good eye on him moving forward this weekend.

Point guard Alex Jones impressed in the win. The built-like-a-running-back guard found gaps in the defense to attack the rim at will against Charlotte Nets-Anthony Morrow Elite. He was the best point guard I saw on opening night.

Jones’s play opened things up for big man Gabe Bryant, who played well above the rim, and guard Adam Flagler, who shot it very well. Flagler could be a big breakout guy at the Atlanta Jam.

TJ Boykin of the Smyrna Stars could use this stage to really springboard his recruitment. Down at half to a scrappy Team Penny team, Boykin used his 6-5 point forward game to push around the Penny defense. He’s one of the most versatile guys in the field. And his play helped spark a second half comeback and win. Coaches from Tennessee Tech and Radford were on hand to see him play.

Evan Sigler for hot to the tune of 5 3s for EAB Select in win over Inspire Atlanta.

Christian Kelly of SEBA FCI Warriors having a strong game. The Duluth guard is racking up the points in the win, 23 to be exact.

Straw Rajic of the Charlotte Aces finished with 15 in a close win over Team Georgia Magic. The Serbian guard is as tough as they come.

Big game for Jaydon Norman of the Warner Robins All-Stars. Had 19 pts vs Welly Wolves. Played with motor and purposeful.

Wellington Wolves ALWAYS have a guy that impresses here at our events. This year's guy may be Shaquille Peters, a 6-5 PF from Royal Palm Beach.

2017 SF Nicolas Maccioni hit the game-winning for Rip City Las Vegas en route to his team high 18 points. What a game it was against Da House. The teams traded buckets all night long and finished the match-up in double overtime sudden death.

Team Penny had 28 pts from unsigned senior Kavion Hancock in a tough loss to the Smryna Stars.