Five-star fireworks to open adidas Uprising in Fort Worth 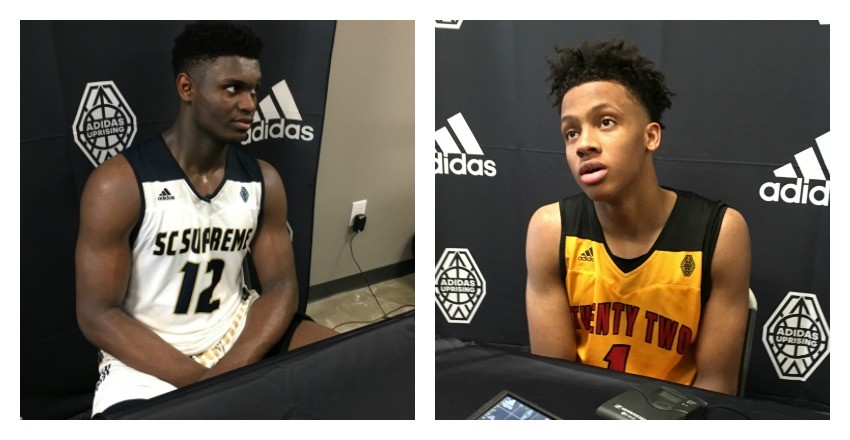 The Fort Worth stop of the adidas Gauntlet series tipped off the three stripes circuit with some big time match-ups. What else would you expect in the Lone Star State. Everything is bigger here. Even the match-ups the people came to see.

Zion Williamson and Romeo Langford are the two highest rated players on the adidas circuit. So, why not pair up the terrific tandem on the main court of the adidas Gauntlet for the opening game of the event?

But Langford had a different plan in the second half. The Indiana native showed why he’s considered a consensus top five national prospect in the class of 2018. He’s a smooth playing, pick-your-moment kind of star. When the game was in back-and-forth mode in the second half, Langford got into a zone and went to work. He was smooth in his delivery made the big plays when they were needed, ultimately snagging the win on opening night.

Archie Miller, in his first recruiting appearance during the NCAA Live Period as the new Indiana head man, sat right underneath the basket to see Langford play.

He wasn’t alone. Mike Krzyzewski and Bill Self were also at the game. The two blue blood head coaches are actively recruiting Williamson.

The second game of the night paired two of the best point guards in the field against each other. Team BBC’s Immanuel Quickley and Basketball U’s Quentin Grimes were the premiere match-up to see here.

And, at least at first, it looked like the home state kid was ready to shine in the spotlight. Grimes was impressive early as a point guard and piloted his young team to an early double digit lead.

Then Quickley put his foot on the gas and never looked back. The Baltimore guard went to work, finishing with finished with 22 points and was an impressive 6-7 from three. Coach K and Bill Self were on hand for the game. So were assistant coaches from Miami, Louisville, Maryland and Providence. (He also mentioned Kentucky and Virginia in his seven schools.)

Grimes struggled in the match-up, going 1-12 from the floor. Kansas and Duke are major players in this one. Texas A&M’s Billy Kennedy and Marquette’s Steve Wojciechowski were also on hand to see Grimes. So was Oklahoma.

EJ Montgomery's 20 point (8-10 FG), 11 rebound, four assists, three steal game against Jordan Brown (6-14 and two rebounds) was the best game that went quietly unnoticed on Friday night. Montogmery’s play on Friday night is a continuation from the season he had at Wheeler High School. The future Auburn big man has been a consistent force over the last year. He was brilliant against Brown.

There were a number of quality sleepers that played their way into the conversation on Friday night.

Maurice Calloo of the Atlanta Celtics struck a cord. The 6-foot-7 forward from Huntington Prep (WV) had coaches scrambling to figure out who he is. The strong-bodied big man grabbed 13 rebounds against Team Arsenal and five-star big man Jordan Brown.

SC Supreme big man Dontarius James was an eye-catcher on Friday night. The 6-foot-7, 220-pound forward is coming off a major junior season at Andrew Jackson HS in Cershaw, SC and showed flashes of good things to come. He finished with 18 points and played well around the floor.

Basketball U’s Greg Brown is just a freshman and the Houston area big man is going to be a big timer when it is all said and done. He went for a cool 15 points and 12 rebounds against Team BBC.