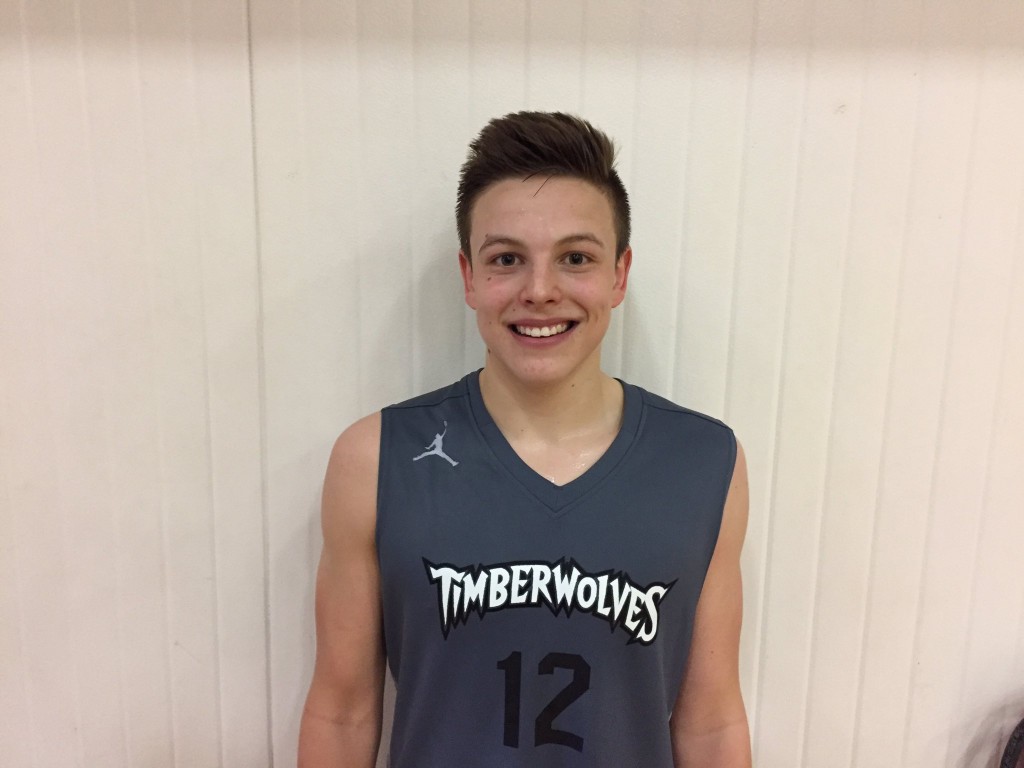 The Atlanta Timberwolves broke open a 39-31 halftime lead against Team Intensity to race away 86-63 while missing a handful of key pieces. CJ Smith (pictured), standing around 5-foot-11, dropped in 18 first half points to power the Wolves. Smith was named Sandy’s Spiel Class 7A Most Improved Player after averaging 19 points per game at Forsyth Central. The Indiana-born unsigned senior combo guard poured in 33 points on the night, drilling five threes. Smith not only was effective from distance, but even driving to the basket. The savvy guard was able to use his body to shield defenders to finish in the lane. He is weighing interest from D-III schools and JUCOs.

Smith got a majority of his open looks off the slick passing of sophomore point guard Matt Gonzalo. Gonzalo, a state runner-up at St. Pius X this year, collected 13 points and 7 assists. His playmaking was electric with his first step beating nearly every defender Team Intensity threw at him. The floor general turned heads with his aggressiveness.

Four players scored in double figures while two others netted 9 for the Timberwolves. Johnson-Gainesville’s Will Richter effected the game in a multitude of ways. The junior guard finished with 10 points, 8 rebounds, 4 assists, 4 steals and 1 block, bringing energy all over the floor.

Team Forrest defeated Atlanta Select Prime 67-48 behind the backcourt play of Kye Jeremiah and Cam Armstrong. Jeremiah (Holy Spirit Prep) scored 13 points and controlled the pace while Armstrong (Alexander) caught fire in the second half. Jeremiah is at his best when getting to the hole and finishing through contact. Armstrong was aggressive as usual, attacking the rim and raining threes off the bounce, burying five three-pointers and finishing with a game-high 19 points. Armstrong worked his way into the Alexander rotation as the season went on this year and will be expected to become an impact player as a junior.

Atlanta Select Prime’s Justin Myles looks like an interesting prospect. He hasn’t yet scratched his potential and only scored 5 points, but the 6-foot-7 forward is long and lean. Myles blocked a handful of shots and was a willing shooter from up to 17-feet out, knocking down a jumper. The natural length and athleticism looks to be there, now it’s up to him to put it together consistently.

Dallas Teague of 3-Point Play dropped in 33 points in a 70-56 victory. The Lakeside-DeKalb High School freshman should be able to crack the rotation after four senior guards graduate this May.