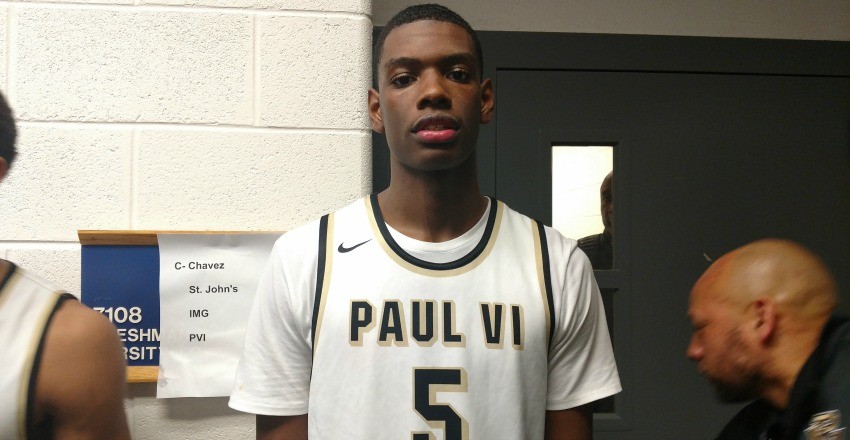 The National Hoops Festival is always a must-stop along the high school travel scene as this year’s event set up for quite possibly the best one yet. A plethora of top talent from the east coast hit the floor at the DeMatha Catholic High School gym and while a few from the Peach State and the surrounding states came in and did their very best, it was a local recruit that had the gym buzzing the greatest.

In a battle with the Collin Sexton show and the Pebblebrook High bunch, Brandon Slater and his Paul VI squad held their ground throughout and came home with the win. While it was Sexton, a five-star lead guard that had the fans on their feet during the first half of his contest, it was Slater and his group that came out on top.

A 6-foot-5, slender and slippery wing out of the DMV, Slater has always exuded ideal upside due to his length, versatility, shot making skills, and defensive upside. All of that was on display on Saturday evening as he finished with a complete stat line of 17 points, 10 rebounds, and four assists.

Despite the fact that he only made one of his five perimeter attempts, Slater is the ideal 3-and-D prospect. He can guard various spots on one end but can be a consistent threat from off the catch on the opposing side of the court. It is his because of his versatility and potential that have made schools come calling and with some added persistency. “I probably hear the most from Maryland, Villanova, Miami, Virginia, and South Carolina,” the top-50 wing stated.

Interestingly enough, Miami and Maryland dispatched their head coach and an assistant on Saturday, while Virginia rolled two deep with an assistant from South Carolina on hand. However, Slater did go on to say that distance would not be much of a factor and that things are still in the gathering and feeling out stage with his recruitment.

Speaking further on Collin Sexton, the 6-foot-1, long armed but super entertaining senior out of the state of Georgia, came to the nation’s capital and had the entire audience on its feet during his squad’s first half. While there may be a few more prospects with better upside for the next level, there definitely is not one that is more fun to watch. Sexton is primarily about putting the basketball in the basket, something that he did with rather ease as he exploded for 21 points off of eight-of-twelve shooting from the field before the first half’s buzzer sounded. Headed to Alabama next fall, the five-star guard has become much more athletic and physically sculpted and while he still does need some more on-court discipline, Sexton is a complete gamer and a ballplayer that any coach would love to mold and develop.

It seems that whenever we discuss Collin Sexton, that Trevon Duval’s name is not too far behind. The 6-foot-3 guard out of Delaware made his return back to the northeast as the explosive senior started off his matinee session with a bang. So explosive, Duval has had issues in the past in settling for the perimeter jumpers and forcing passes in the lane. While he still needs some work with this, the five-star guard did show progressions with his decision-making. He finished with 17 points off of 8-of-13 shooting from the field and despite the fact that he didn’t make most of his jump shots, Duval’s upside at the lead guard spot is second to none. He threw down ridiculous dunks, finished with a sturdy three-to-one, assist-to-turnover ratio, and has the aura about him that makes you want to tune in every time he laces up his shoes. No visits have been planned yet but look for the IMG star to divulge into the recruiting process in the not-so-distant future.

The situation that Hamidou Diallo is in is one that I wouldn’t wish upon anyone due to the stress and pressure on his shoulders. See, the 2017 guard has already graduated from high school and will be the proper age to be drafted by an NBA franchise in June, which is if he enters his name into the draft. That is up in the air at the moment but that didn’t stop a number of NBA scouts from entering the gym on Saturday. What they got was a complete showing out of the New Yorker as the 6-foot-4 guard threw down ridiculous dunks, showed improvements with his jumper, shots that came in rhythm from off the catch and others from off the bounce, and an unrelenting nature in putting a dent on the glass. Add it all up and a final stat line of 29 points and nine rebounds off of 13-of-19 shooting from the field warrants some consideration, if it does happen, for Diallo to be a fantastic, high-upside first round draft pick next summer.

Putnam Science has a load of talent across the board on its roster including three of the better frontcourt talents still available this winter out of the 2017 class. Isaac Kante is a hard-nosed and physical big man, Alex Yetna brings a major motor and a hard hat to the painted area, while Malik Ondigo may have the greatest upside of the three seeing that he is the longest and is capable of guarding a ball screen. The three combined for 29 points and 20 rebounds and each came away with a Charlotte offer.

While his squad was missing its star big man in Mo Bamba, Westtown got a great boost from Jake Forrester. The 6-foot-8 forward out of central Pennsylvania displayed improved athleticism along with a major nose for the ball near the basket. Finishing with 16 points and six rebounds, expect for the junior forward to receive his dues from a variety of the better mid-major programs and even a few high-level ones in the coming months.

The need for a lead guard that plays with no abandon and buys into creating for others is always at hand, hence the value in Tre Wood. The 6-foot lead guard out of St. John’s College has slid into the lead guard spot left for him by now Maryland freshman Anthony Cowan. Completing his day with a final line of 15 points, five assists, and three rebounds, Wood spoke on offers from Iowa, St. Joe’s, ODU, Towson, Penn State, Manhattan, JMU, Rice, and Towson with added interest from Providence, Virginia, and Florida.

Who has next out of the DMV? Look no further than Jeremy Roach. The freshman lead guard was a catalyst for his team’s win on Saturday and on the heightened stage at DeMatha, the 6-foot guard looked more than ready for the big time. A complete stat line of 12 points, four assists, four steals, and two rebounds? Yes, Roach has the ‘it’ and he is due to become a high-level recruit, a prospect that will get his dues from some of the best college programs across the nation.