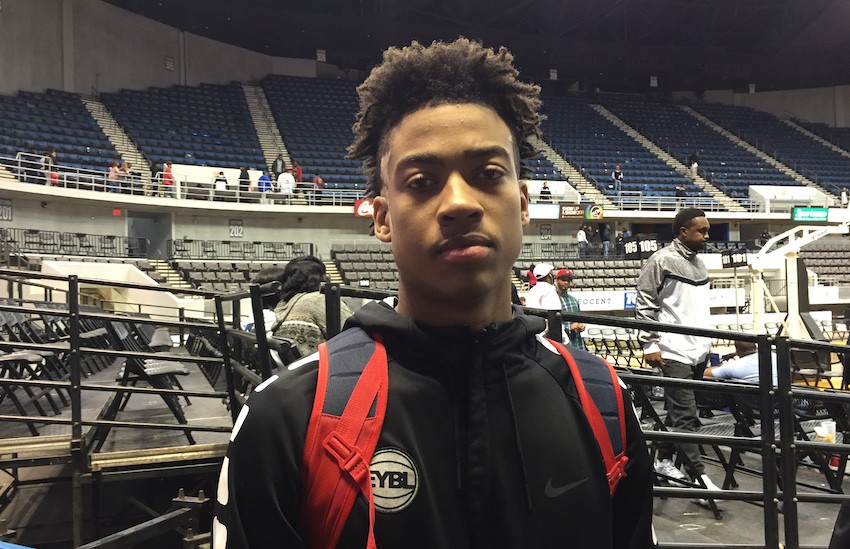 For the first time in the history of the event, the 34th annual AL.com Classic called downtown Huntsville’s Von Braun Center home on Wednesday evening. With three of Alabama’s top teams still in play for a spot in the championship Thursday night, the epi-center of Alabama high school hoops was Huntsville.

Mountain Brook’s suffocating defense and intense pressure led the Spartans to a commanding 65-33 victory over the Austin Black Bears on Wednesday evening.

Coming into the game, both teams were undefeated with the Spartans ranked No. 1 in 7A and the Black Bears ranked No. 2 in 6A. Nevertheless, after the dust settled, Mountain Brook’s experience in big games prevailed.

2019 combo forward Trendon Watford (pictured above) led the way for the Spartans with 24 points and 12 rebounds. While his point total shows his ability to score, the 6-foot-7 forward did a phenomenal job of passing and being a playmaker for his teammates.

2018 shooting guard Sean Elmore continued his solid week of work with 13 points and five rebounds. The junior has emerged as a serious perimeter threat with his 3-point shooting ability. His toughness and ability to defend makes him a valuable piece on the perimeter, too.

In what began as a slow start for Mae Jemison as James Clemens stormed out to an early 12-2 lead, Jemison head coach Jack Doss had to look to a reliable guy off the bench early in the first quarter.

Senior Brandon Crosby created a spark in the first half for the Jaguars, putting them back in the game with a couple of big shots, including a deep three-pointer at the halftime buzzer to give Jemison a 28-26 lead at intermission. After that, the Jaguars never looked back.

During the first two rounds of bracket play, Alabama signee John Petty resorted to his underrated passing ability to create opportunities for teammates. However, he scored the majority of his 23 points in the second half to close things out for the No. 1 team in 5A.

Despite the loss, 2019 wing A.J. McGinnis had an impressive showing, knocking down four three-pointers and finishing with 15 points. The sophomore has all the makings of a talented prospect with his length and upside. He continues to get better each time out, but his shooting stroke has remained the same. McGinnis is a young prospect to keep an eye on going forward.

Senior big man Marcus Lacey put in another strong performance, scoring all 16 of his points in the second half.