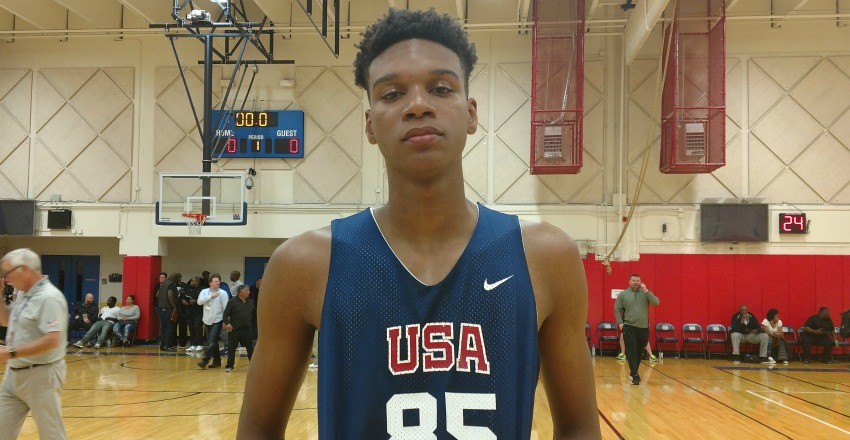 This past weekend in Colorado Springs, USA Basketball brought in a number of already decorated high school seniors to the Olympic Training Facility for four sessions over the course of two days. The likes of Collin Sexton, Wendell Carter, and Michael Porter were all on hand but so were a litany of others that are just now beginning their hopefully illustrious prep and international playing careers. Hosting 55 prospects from the 2017, 2019, and 2020 classes, we take a look back at what we learned during our quick stint out in the Rocky Mountains.

Lining up the likes of Collin Sexton, Trae Young, and Trevon Duval against prospects two and three years younger is not even fair. That was evidently clear once the camped kicked off on Saturday morning where the three premier lead guards from the 2017 class toyed with their younger counterparts.

Sexton did his usual as he got to the basket and finished with unbelievable body control and his change of speeds dribble put practically any younger defender on skates. Young showed off his patented outside jumper and whenever his man tried to go beneath the ball screen, the Oklahoma native made him pay; lesson learned by the younger chap. Duval, a bit more athletic and electric compared to his other two elite lead guard peers, got to the basket off of downhill drives and emphatically threw home dunk after dunk.

We didn’t even talk about all that Wendell Carter, Austin Wiley, and PJ Washington were able to do as they practically received every entry catch with their back directly beneath the basket before they powered up and finished with two hand dunks.

To put it lightly, there is a deep divide that can be created in just two or three years. I am sure some of the underclassmen on hand, three years from now, will be doing just the same to the 2023 and 2024 class members when the opportunity presents itself.

It was impressive seeing the continued progressions from Collin Sexton, Trae Young and Trevon Duval. While all three brings varying skillsets to the lead guard position, it was fun to watch all three step up their games to the next level as they showed as such during their quick time out in Colorado. However, Michael Porter may have even had made a bigger statement displaying a more beefed up physique, an improved dog-like mentality around the basket, and effortless scoring game from 22-feet and in.

The number-three ranked prospect in the 2017 HoopSeen Top-125, Porter did all he could to get the next bump and possibly receive the number one ranking during the next update. While DeAndre Ayton and Wendell Carter will remain steadfast in their pursuit of that same position, the two days that Porter had at USA might have been his best string of practices and scrimmages that we had ever seen from the future Washington Huskies star.

While there has been some poking of Porter in past years in speaking on the 6-foot-8 small forward’s toughness, or lack thereof, all that the Nathan Hale High star did throughout the weekend was throw down numerous dunks in traffic, make for plays from out of his area on the weakside glass, and as usual, impress with his array of catch and shoot jumpers and turnaround looks out of the low and mid-post setting.

Lorenzo Romar has become known for producing NBA talent during his time at UW. Yes, success on the hardwood hasn’t been at hand recently but a guy like Porter, someone that has become much more consistent with his production and has steadily improved his overall skillset, is tracking as an immediate go-to option and a weapon that can accrue a number of wins during what could be a short stay at the Pac 12 program.

While the two year gap did give easy insight as how physical improvement and skill development comes into play in separating members of the 2017 class and those within the underclassmen ranks, there still were a few younger prospects that were able to make a name for themselves because of the competitive edge that they brought to the floor in Colorado Springs. 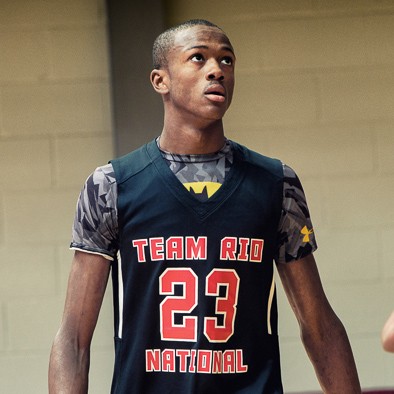 Sure, practically all of the newcomers to the USA Olympic Training Facility were a bit anxious and nervous during their initial few minutes on the playing floor. It made it that much more impressive seeing some of those members of the 2019 and 2020 classes bring a chip on their shoulder to the floor and added confidence in not backing down from those much bigger and older than them.

Right off the bat, Scottie Lewis brought it with his explosiveness at the basket along with his vocal and hard-playing style on the hardwood. While he is far from filled out physically, the 6-foot-4 jumping jack type of wing went hard in every drill, was talkative throughout, and wasn’t afraid of making mistakes.

Speaking of explosive, Christian Brown cemented his standing as a top-15 recruit in the 2019 class and still has his best basketball years away. Having packed on quality muscle mass since the summer, the South Carolina native went head to toe with his elite, older peers and sure was not afraid to get on the ball and scrap for the loose ball opportunity.

While Brown and Lewis have more exuberant playing styles, Quinn Slazinski more than belonged on the playing floor regardless of if he was getting a sweat in with the older or younger crop. Already boasting a handful of Big 12 offers, the 6-foot-7 forward is beyond polished and showcases a throwback type of playing style. He isn’t an explosive athlete but he does play to his strengths and will grow into becoming a heralded recruit out of the 2019 class.

The last time most of the college recruitniks saw Matt Hurt, the 6-foot-9 power forward was capping off a solid run on the 17-under circuit on the adidas circuit. Three months late, the class of 2019 prospect has found a way to develop his skillset further while also improving his athleticism which made the Minnesota native quite the matchup issue all weekend long in Colorado.

Now that his brother is on campus at the University of Minnesota and gearing up for his first season for the Gophers, the sophomore forward will attempt to carry on the legacy of his sibling within the high school realm these next three years. Expect that not to be much of an issue for the impressive college prospect as Hurt did a bit of everything even when lacing up his shoes against those two and three years older than him.

While he will never be described as an explosive athlete, Hurt has improved his lateral skills and athleticism on the attack to the basket. A much more fluid ballplayer that can score the ball at all three levels on the floor, the Minnesota native hit on a number of shots off of his own creation and even showed off some toughness and instincts on out of area offensive rebound putbacks.

A primetime, top-10 recruit in the 2019 class, Hurt plays well beyond his years on the playing floor and with a little Larry Bird to him, the sophomore gave good reason for why Kansas and UNC have already offered.

We had covered Isaiah Todd a bit up until this point but now that the 6-foot-8 wing-forward is in high school, expect to hear that much more about the Baltimore native.  Now living in Richmond, Virginia, Isaiah Todd, a member of the 2020 class, created quite the stir in Colorado with those in attendance because of just how good he can be moving ahead,

Very rarely do you find someone that just turned 15-years old and can run the floor and jump with balance and coordination whenever that respective ballplayer is 6-foot-8 and taller. It is even more difficult to find someone the size of Todd that has the ball skills and can actually be seen as a small forward now and moving ahead.

Sure, Todd is in need of strength gain and when going up against prospects within the 2017 class in drills and in the scrimmage sessions, the John Marshall High prospect struggled to produce through contact. However, he did show off some fight and toughness but it is his willingness to get better and his advanced skillset that really caught our eye.

On a number of occasions, Todd would use the jab step to create separation off of the hop, create a better angle for himself, and then attack the off-balance, weak foot and get to the basket with rather ease. This isn’t to say that the 6-foot-8 forward can’t step out and hit the jumper as he knocked in a few from off of spot-up looks and nailed a few others off of the pick and pop.

Heading back to the east coast, Todd did what was needed in impressing every scout and onlooker in the building. His basketball ceiling is tremendous and with continued progressions and hard work, has everything it might take to be the best in his class.