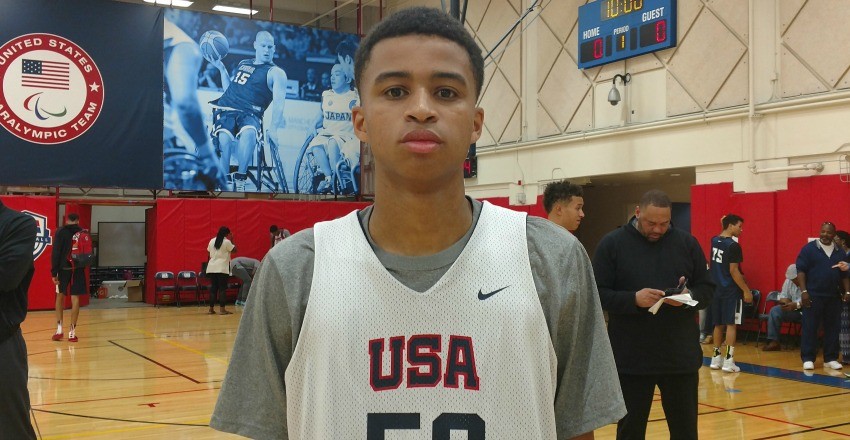 This past weekend in Colorado Springs, USA Basketball attempted to lay down the foundation for future success by inviting 39 freshmen and sophomores to the US Olympic Training Facility indoctrinating some of the top up and coming talent from the underclassmen ranks. There were also the top 2017 class members on hand but looking back on the time spent in Colorado, a number of impressive standouts popped out from the fray. Today, we take a look at those that impressed from the 2020 class.

The son of the one time NBA All-Star Shareef Abdur-Rahim, the budding stardom from the California native is clearly at hand. More of a prospect rather than a ballplayer, which, of course, could be said about practically any 2020 basketball recruit, the 6-foot-4 off guard has the chance to be as good as he might want to be. A very confident ballplayer that enjoys the game, a few inches of growth could cause for an even more intriguing prospect to be formed as Abdur-Rahim could tap out at 6-foot-8. Regardless, there is a reason why Rutgers and Texas A&M have already offered and heading to UConn this weekend, the Seton Hall Prep guard has all of the makings of a priority recruit.

He isn’t a super athlete like some of his peers that suited up in Colorado Springs but in speaking on ones skillset and the ability to wear many hats for his squad, none did it better than J’Yare Davis. The Delaware native, standing around 6-foot-6, can play the shooting guard spot on down to the power forward position, but it is his playmaking skills that make him unique. He can pick apart an opposing defense from off of the drive to the basket but is a solid finisher at the rim whenever the opportunity is presented to him. Landing an offer from St. John’s following the trials in Colorado, expect for the majority of the top east coast and New England programs to zero in on the budding star out of the Sanford School. 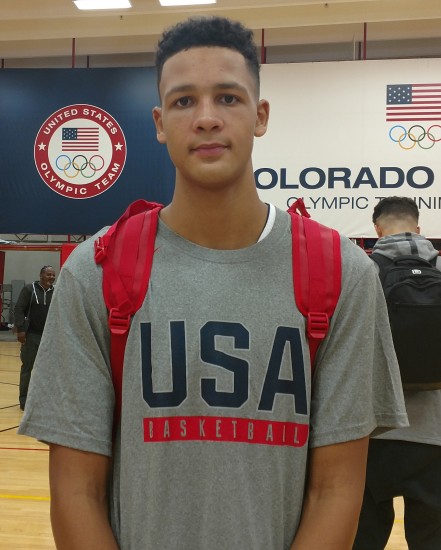 Things started out on a fine note and they ended in a similar manner for the prospect from Iowa. Xavier Foster, a slender but athletic and hard playing 6-foot-8 prospect out of the 2020 class, caused great a stir with his mobility, motor in chasing the ball up and down the floor, and his ability to step out and nail the perimeter jumper. Strength gain is in order but the raw abilities and potential from the Oskaloosa High prospect is staggering, good enough for offers to have already rolled in from Iowa, Creighton, and Iowa State in recent weeks.

Quite possibly the top standout from the 2020 class, Jalen Green did a bit of everything during his quick two days out in the Rocky Mountains. The 6-foot-4 off guard brings fine length to the perimeter along with an unbelievable feel and pace for the game. A deceptively smooth and fluid leaper at the basket, Green never plays outside of his comfort zone and is a ballhandler that can make others better whenever pressure is applied to him. His jumper does need some tinkering but expect to hear much, much more about the top of the line prospect from California that just pulled in an offer from Creighton.

If you’re looking for a kid with some swagger and confidence galore, Carson McCorkle is your type of guy. The lead guard out of North Carolina isn’t the quickest of dudes around but he is someone that uses his change of speeds dribble and intellect for the game in producing in the backcourt. He doesn’t turn the ball over much and what takes the cake with the 6-foot-1 floor general does is in his leaping abilities at the basket. Already holding offers from Iowa, NC State, and Georgia Tech, things are just now beginning for one of the top point guard recruits out of the freshmen class.

The event began with a bang from Micah Peavy as the slender but smooth 6-foot-4 off guard had it all going for him. While he isn’t an explosive athlete, the Texas native is someone that can practically do whatever is asked out of him from a perimeter recruit. He can hit the open jump shot but may be best served on the attack as he threw a number of impressive passes that led to easy finishes for his teammates around the basket. The next few years will define just how good Peavy can become but with an early offer from Incarnate Word in hand, things could speed up mightily for the Texas Hard Work travel club member.

The next man up for the loaded Paul VI Catholic program this winter, Jeremy Roach is one of the best passers and playmakers in all of the land from the 2020 class. Sporting a solid physique as the Team Takeover product absorbs contact appropriately, Roach’s ability to read a half-court defense and make the proper pass off of the high ball screen is a telling sign of just how mature the DMV recruit’s game is already. Expect for the 6-foot-1 point guard to learn the lay of the land during his inaugural high school campaign playing behind Pitt commit Aaron Thompson and finish his career as a decorated ballplayer under head coach Glenn Farello’s tutelage.

In all things being equal, there may not have been two or three prospects in the entire camp that brought better upside to the playing floor than Isaiah Todd. The Baltimore native has continued to grow where he now stands above 6-foot-8 and has begun to fill out and pack on proper weight. Still, Todd does need to get stronger as he got pushed around a tad within the interior but where the impressive freshman does his best work is facing the basket from the 15-18 foot range. He has a super smooth jumper with confidence in tow along with fast-forwarded ball skills in putting the ball on the floor from off of the first step. The Team Loaded product has the tools to be special and a fine student of the game already, Isaiah Todd displayed all of the tools that make him a special recruit.