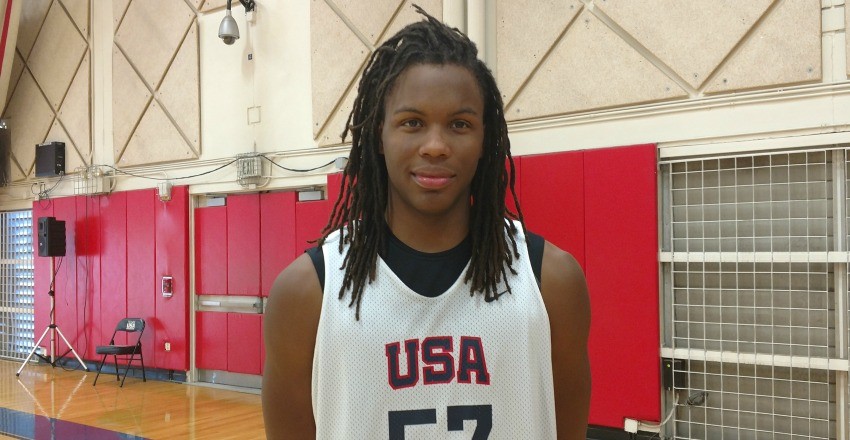 This past weekend in Colorado Springs, USA Basketball attempted to lay down the foundation for future success by inviting 39 freshmen and sophomores to the US Olympic Training Facility indoctrinating some of the top up and coming talent from the underclassmen ranks. There were also the top 2017 class members on hand but looking back on the time spent in Colorado, a number of impressive standouts popped out from the fray. Today, we take a look at those that impressed from the 2019 class.

One of the most consistent energy givers in all of the land and someone that just enjoys playing the game, Brown gained a great following during his two day stint in Colorado. He has grown some since the summer but also has filled out accordingly but at the same time, improved his jumper. A premier athlete in the 2019 class who can now consistently knock down jumpers, the upside is scarily good with the South Carolina native. Now add in the fact that Brown plays like there is no tomorrow and what you have is a five-star small forward recruit that is just scratching the surface of how good he can be.

Carey, who was have spoken on extensively in the past here at HoopSeen, was a major standout on Sunday. When engaged and willing to bang around down low, no one is more special than the Sunshine State native. The lefty is more than happy to play away from the basket as he nailed a few step back jumpers and trail 3-pointers off of the break but it was his activity around the basket that made us excited with his play in Colorado Springs. He has all of the physical tangibles and the fact that he was one of the youngest 2019 class members in attendance gives greater insight on the star qualities from the budding recruit out of south Florida. 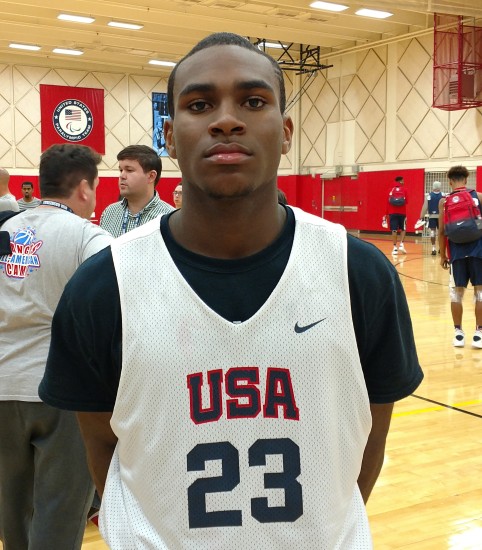 Playing with a purpose is sometimes an issue in a setting that USA Basketball enables, primarily speaking on the younger crop in attendance as some attempt to do some things that they are just not capable of achieving. That is not the case for De’Vion Harmon, one of the steadiest guards to suit up in Colorado Springs. The well put together combo guard displayed a great feel for the game along with deceptive explosiveness at the basket. The Texas native played under control each time he possessed the basketball and with a visit to Oklahoma looming this weekend, expect for a bevy of the Big 12 and SEC programs nearby to heavily track the Guyer High guard.

Quite possibly the top standout from the 2019 class, Hurt did it all and brought even more insight into just how good he can be moving ahead. The 6-foot-9 power forward has become a lot more fluid and agile in getting up and down the floor but where Hurt shines the greatest is with his advance scoring package. The Minnesota native can create for himself from off of the perimeter and gets to his spots without much of an issue. A five-star recruit and top-10 prospect within his 2019 class, Hurt is elite and one of the toughest matchup issues in all of the underclassmen ranks.

Nothing about his game is loud but whenever things get down to it and the game is on the line, Jaime Jaquez is on the playing floor. The value with the west coast recruit is outstanding and while he may not be elite at anything, there sure aren’t many holes in the Camarillo High sophomore’s game at the time being. Just now entering his second year of high school ball, Jaquez can rebound the ball, shoot it in rhythm, pass it accordingly, but also defend various spots on the floor. No offers have been handed out just yet but UCLA, Gonzaga, and California have begun to express interest in the 6-foot-6 sophomore after evaluating him recently as his school’s open gym.

There has already been tons of publicity surrounding Scottie Lewis and truthfully, it isn’t enough in describing the sophomore’s game, upside, and the intangibles that he brings to the hardwood. A 6-foot-4 swingman that defines what it means to be a competitor, Lewis’ best basketball is still a far ways off. However, the Team Rio star did display a much improved jumper but also the usual high leaping abilities on the glass and off of the dunk attempt. Finding a smile on his face is as difficult as finding Bill Belichik in a hoodie on a football Sunday where Lewis brings the entire package to the table as a top of the line college prospect.

From beginning to end, there wasn’t a more sure fire bet for a productive session that that Quinn Slazinski was able to bring to the hardwood. While he isn’t a premier athlete, the kid just knows how to play the game. A 6-foot-7, mix and match forward, can step out and hit the perimeter jumper, back his man down and score facing away from the basket, yet has the savvy and IQ in playmaking on the attack. Holding early offers from the likes of Texas A&M, TCU, Georgia Tech, Oklahoma State, Rice, Houston and Texas, Slazinksi is a major match-up issue and will be a fine priority recruit out of the Lone Star State.