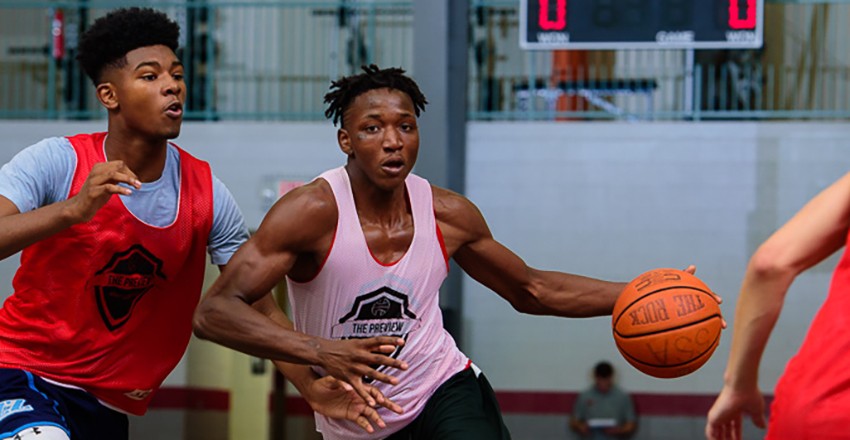 The Georgia Fall Preview was jam-packed was players on Saturday at Suwanee Sports Academy and our staff looks back on the top overall performers from the event.

Deon Berrien, 2017, Evans Lakeside (GA) pictured above: Energy. Tons of energy. That’s what the 6-foot-6 wing forward from the Augusta area brought to the table. He was a popular guy amongst the coaching crew that we had on board on Saturday. Berrien owned the station work and dominated his match-ups in the game settings. He played a huge role for the Georgia Bulls on the travel circuit this year and is primed for another terrific year in East Georgia. Berrien should be a priority junior college prospect this year. — Justin Young

Clarence Jackson, 2018, Wilkinson County (GA): Coming out of a Class A-Public school, Jackson plays with a chip on his shoulder with something to prove. The tough-nosed lengthy guard stands 6-foot-5 and has the ability to create his own shot and set teammates up. His size lets him crash the boards and affect games in a multitude of ways. The likes of UGA, Florida State, Alabama, Georgia Southern, Furman, South Alabama, Florida Gulf Coast and more have checked in on the state champ’s progress. - Kyle Sandy

Isaiah Kelly, 2018, Pace Academy (GA): Kelly provided a lot of energy at camp from the jump, bringing the intensity in drills and throwing down some huge dunks. When the games got started, the highlight reel continued. He was especially good in transition, where he is tough to stop from finishing above the rim. However, Kelly also rebounded his position well and shot the ball well in the halfcourt. Overall, he came in one of the better players in Georgia’s 2018 class, and he cemented himself in that position at The Preview. - Carter Wilson

George Maslennikov, 2018, Holy Spirit (GA): After great showings two of the last three weekends at our events, the 6-foot-9 forward will make a strong debut in our next round of 2018 rankings for the state of Georgia. We saw his developed offensive post play at the HoopSeen Shootout and then we saw his pick and pop game at the Fall Preview. His offense extended out to the three-point line and he shined in transition. - Justin Young

Tyonn Stuckey, 2017, Redan (GA): The Redan product showed that he is one of the better shooting point guards in the Metro Atlanta area. Stuckey was knock down from deep and could not be left alone from the perimeter. He was also strong with his handle, staying low to the ground, getting into the paint, and causing problems for defenses with his distributing abilities. He will be a player to keep tabs on this year in Dekalb County. - Carter Wilson