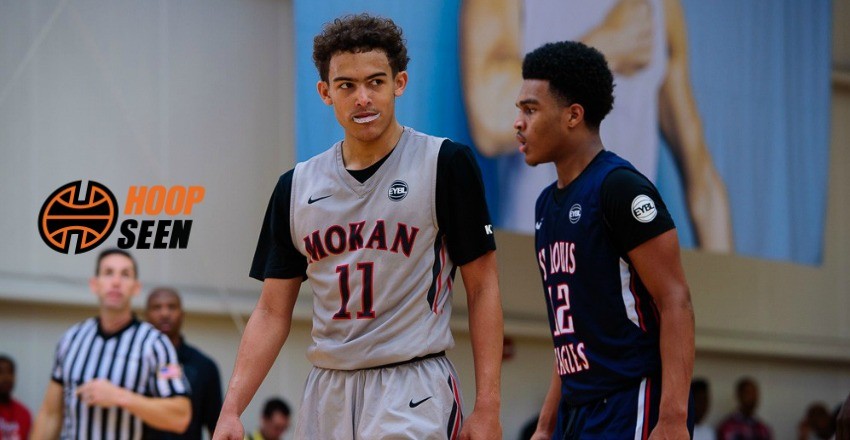 While the room temperature levels in the gym at the Riverview Parks Activities Center was a bit chilly, the competition in the Augusta based gym was more than heated. Bracket play commenced throughout each age bracket at the Nike Peach Jam but the best was saved for last as Quade Green and Trae Young remained hot in leading their squads to a finals berth.

Things haven’t stopped with the floor general out of Philadelphia. What he lacks for in size standing just near 6-foot tall, the PSA Cardinals star more than makes up for it with his decision-making skills, facilitating abilities, IQ for the game, and pure dog-like mentality. He can take over games just as he did during the final two contests that he suited up in on Saturday as he was just dominant down the stretch of his team’s comeback win to end the night. Trailing by 20 points before the first half, Green hit on a number of mid-range pull-ups whenever the defender decided to go under the ball screen but also showed off just what makes him special by way of his on-point passes following the high ball screen. A pure professional with his approach, there is a ton of Mike Conley Jr. in the rising senior, a prospect that is working his way into McDonald’s All-American consideration and was highly followed all day by the staffs at Duke, Kentucky, and Syracuse. 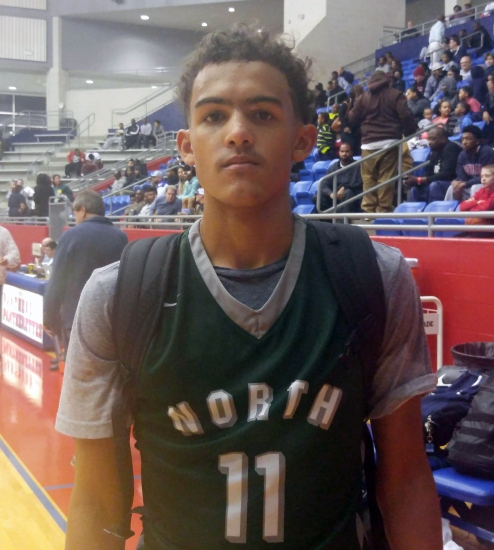 Albeit in a different variety at the primary guard position, Trae Young is more like the younger Quade Green, which is a score first type with the ball in his hands. Regardless, the Norman, Oklahoma native has been tremendous all week long. A few weeks back at the USA U18 trials, the MoKan product seemed very out of place and went soft at times as he settled too much for the perimeter jumper. In Augusta, the 6-foot-1 guard has been unstoppable on drives to the cup as he has finished with excellent body control off of his feet and with either hand. Throw in his go-to outside jumper, a shot that he can hit out to 23-feet without much of an issue, along with his much improved passing game, and it seems that Young has hit the next level in his game. Finishing with 22 points and six assists in the win, the Norman North High star has remained a focal point for the staffs at Oklahoma, Kentucky, and Kansas this week as he will more than likely call one of the three his future home.

This is what we have been waiting for with DeAndre Ayton. The near 7-footer has had a come and go motor in years past but in Augusta, the native of the Bahamas showed some major dog in him each time he hit the hardwood. He played more like Amare Stoudemire pre-injury than post as he stuck his butt near the basket and dominated during his stay in South Carolina. He showed off a set of advance post moves and counters off of either block and is capable of stepping out and hitting the pick and pop jumper to 20-feet. Blessed with a college ready body and a vocal mentality as he even barked a few times at his opponents, the light has come fully for Ayton. He showed off just what makes him special and while his team went down in defeat, the Cal Supreme five-star still produced to a final box score total of 18 points and 12 rebounds.

While his team went down in defeat, we have to give some love for Alex Lomax. The 6-foot-1 guard from the Team Penny bunch was tremendous during the first half of his late night contest against MoKan Elite where he brought impeccable on-ball defense aided by his quick twitch abilities and super-fast hands. He did turn it over a bit down the stretch whenever he was pressured more heavily, yet the 2018 guard showed some composure in the half-court in getting his team into their proper sets before nailing a handful of mid-range pull-ups while seeing little room between himself and his defender. He has yet to nab a division-1 offer just yet but just wait because Lomax is due to see a big time recruitment from some of the better programs down south due to his competitive nature and two-way production skills.

Sticking with the point guard crop, Foster Loyer was tremendous in helping his squad secure a Sweet 16 final berth in the 16-under platform at the Nike Peach Jam. Far from a physically developed and jumbo sized guard, Loyer is more of your sub 6-foot type of lead guard that makes every proper play and decision with the basketball in his hands. He can hit the outside jumper whenever he is placed off of the ball but it is his ability to make others better from off of the drive to the basket that really stands out. The All-Ohio star rarely ever gets rattled as his soothing presence reflects onto the rest of his teammates during crunch time situations. His size may hurt him from the highest level but whoever lands the talents of the Clarkston High product will have received a fine and mighty four-year competitor at the most important spot on the floor.

How can we not speak on the play of Hasahn French and Walter Whyte down the stretch of their comeback win on Saturday evening? The duo don’t get their dues as they play on a loaded PSA Cardinals 17-under bunch but their competitive grit and egoless basketball makes them winners wherever they touch the playing court. Each are fairly explosive around the basket, play much bigger than their listed sizes, and are willing to do whatever it takes to secure the W for their bunch.

He keeps getting taller and longer as the potential and upside mirrors his growing physique. Christian Brown has made great strides in the past year in handling the ball and play making off the bounce along with adding major consistency on his outside jumper. He also had the dunk of the weekend where the highly athletic and energized 2019 wing has the goods to be an elite recruit.

It has been a tremendous weekend all around for Brandon Slater. Despite going down in defeat in the semi-finals on Saturday, the lefty has become much more engaged in plays below the 3-point arc regardless of which side of the floor that he is on. The southpaw wing was fabulous in getting to the basket and finishing with major athleticism, knocking down the catch and shoot jumper, and showing off major 3-and-D potential as a lockdown, versatile defender. He is an easy top-50 type of recruit with more upside to follow.