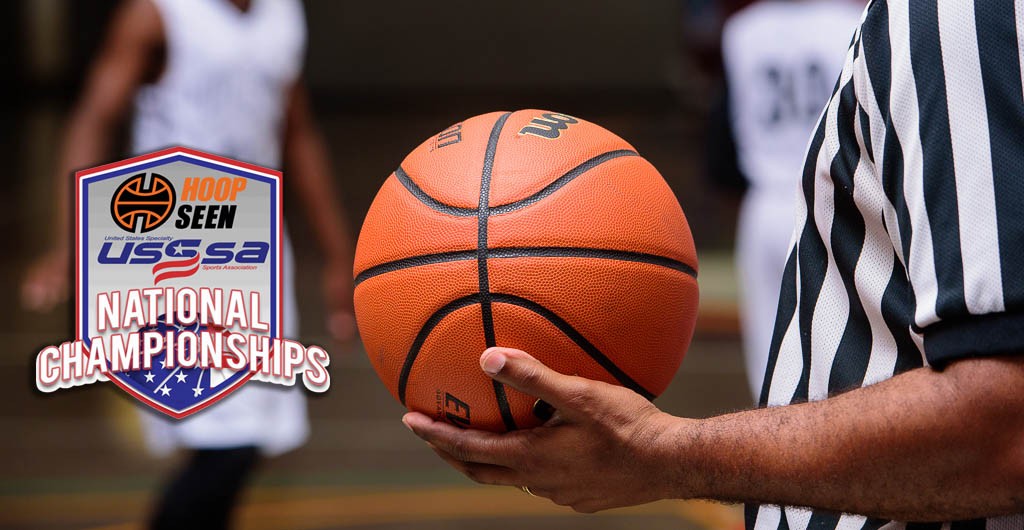 The 8th grade division at the USSSA Nationals was one of the strongest age divisions of the event. The championship game featured Georgia Class Act Academy and Taylored Athletes.

The first half was a slow paced game, with Taylored Athletes taking their time on all their possessions and limiting Class Act's offensive possessions. Taylored Athletes led 12-10 at the half. The second half saw a faster game and the defensive intensity picked up as well. Josh Smith and Frank Gilliam came up with some huge baskets for Class Act to give them a boost, and defensive stops down the stretch sealed the deal, with Georgia Class Act taking the title 39-34.

Josh Smith had 14 points for Class Act with Frank Gilliam adding 9 and Deivon Smith adding 8. In the loss for Taylored Athletes, Javon Bell scored 13 points to cap off a great weekend for him.

The 13U division of the HoopSeen USSSA Nationals was extremely competitive throughout the weekend, and, as expected, the championship game came down to the wire, too. The Miami Lightning were able to overcome some costly free throws and hold on to defeat Team Florida, 47-42.

Sunday afternoon’s matchup pitted two of the top teams in Florida against one another, while also featuring some of the Sunshine State’s top young talent. Jacorey Brookes, a talented young wing, led the Lightning all weekend long and capped off his weekend with 11 points in the championship game. Julian Gracia also rattled in 10 points. Big man Craig Starks pitched in 9 points with limited minutes due to foul trouble.

Team Florida’s weekend didn’t end as well as they had hoped, but they had a successful showing, too. Sharpshooter Ismael Baqai hit some timely shots in the second half to put his team in the driver’s seat. He finished with 12 points. Michael Tate added 11.

The theme of Championship Sunday was finish strong and Henson Select had to do just that. The Tampa, Florida team went toe-to-toe with Michigan-based Common Bond for the 13U Division II National Championship, winning 49-48.

Henson Select had great balance all week long and that team play carried over to the title game. Donte Jhagroo and Myron Scott finished with 10 points each while Jalen Harris, Jr. put in nine. Renaldo Garcia scored eight.

Common Bond was led by Kayion Smith’s 14 points. Aidan Lee and Gunner Wooden each scored eight for the Michiganders.

The game was a rematch from pool play. Henson Select won that game, too.

A 19-11 halftime lead turned into a 14-point victory after the Wellington Wolves clamped down on defense, allowing just seven points in the second half. The inside-outside duo of Brewer Applegate and Keon Kindred proved to be too much for the South Florida Disciples.

Applegate orchestrated the offense alongside Steph Curry lookalike Brenden Williams, who drained two threes in the win. Applegate finished with a team-high eight points along with Kindred. Kindred’s size and strength down low bought the Wolves second opportunities on the offense glass.

The 12U Division II championship was to be decided between Blue Storm and the Atlanta Nets.

The difference maker in the game was the defense of Blue Storm, stymying the Nets and making them work for every bucket. That defense limited the Nets to just 34 points and allowed Blue Storm to win 48-34.

Jaquan Adams provided a lot of offense for Blue Storm, scoring a game high 17 points. Chad Stewart also added 8. The Nets were led by Langston Terry, who had 13.