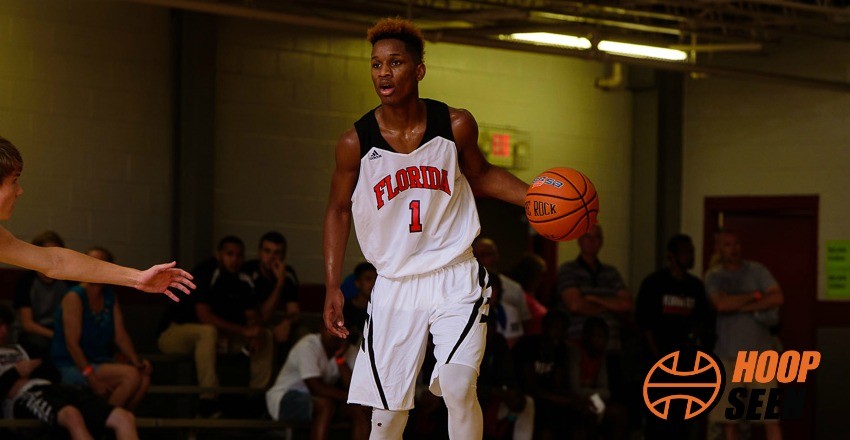 The college coaches kept coming and coming and coming. Before things were said and done with, the afternoon and brief evening session to kick off the Best of the South brought in over 100 separate college programs to the confines of the Suwanee Sports Academy. Whether it was the highest of the high at the division-1 level, to those throughout the junior college ranks, there was someone worth seeing to kick things off on Thursday evening. However, it was Trent Frazier and Tyler Polley who went to work and furthered their resumes as highly followed prospects.

The Suwanee Sports Academy could be the home of Trent Frazier. The Wellington High product has dominated the SSA and one day, who knows, we might just name a court after the Sunshine State native. While he didn’t have his best on tap on Thursday, the super speedy and tough-nosed lead guard threw up 16 points on the scoreboard and was the catalyst for his bunch’s blowout victory.

A lefty with an elite burst on the downhill drive to the basket, Frazier uses the change of speeds dribbles along with a lower center of gravity in getting wherever he wants with the basketball in his hands. While he failed to show off much of an outside jumper, the Florida Elite guard did show composure and good body control in traffic near the lane. Still more of a scorer from off the deck, Frazier did showcase a few nice dump off and kick out passes follow the limited dribble attack showcasing solid play making skills.

Due to the limited amount of point guards and someone that prides himself on his consistent mentality and production on the final stat sheet, a Big 10 program has ventured outside of its geographic niche and made the Florida native a priority. “Illinois talks to me the most,” Frazier said. “Coach (John) Groce is a good guy. We had him in for a home visit a while back. My family loves him and we love him. He has been the best so far and they have been the most consistent. It is nice to have someone that likes you and loves you.”

The Illinois head coach was in attendance for Frazier’s game on Thursday along with assistants from UCF, USF, and Rhode Island, among others. Frazier did mention further interest from Stetson, Cincinnati, Maryland, and Old Dominion, but it seems as if Illinois is the one to beat. “I’m not sure of the date but I am going on an official visit to Illinois in August,” Frazier told HoopSeen.

Applause to the Fighting Illinois as the 6-foot guard is a fighter straight out of the gates and should be a quality grab for whichever program he calls fit.

We like to share the wealth here at HoopSeen. On Wednesday, we covered Tyler Polley pretty thoroughly but we would be doing a total disservice to everyone involved if we didn’t give the platform to the E1T1 product again.

A 6-foot-8, slender and wiry bodied forward, Polley did it again to kick things off at the Best of the South. While he does have to get stronger in handling the bumps and bruises around the basket, the skillset and feel for the game from the prospering senior is beyond intriguing.

Primarily known as a shooter of the ball in past watches, Polley has made great strides in passing the basketball and rebounding it on the defensive end of the floor. He is a slippery athlete at the basket but is an absolute killer following the high entry catch. Whether it is putting it on the floor off of the righty slice to the basket, hitting the 15-foot jumper, or making the proper pass, the break out forward had it all clicking here in Suwanee.

Watched by TCU head coach Jamie Dixon and an assistant earlier in the day and finished off by an evaluation from Rhode Island head coach Danny Hurley to end the night, others such as South Florida, Central Florida, Seton Hall, and Dayton kept a closetful eye on the potential top-100 recruit, a guy that ended the night on a good note with a new offer in hand from the URI basketball program. 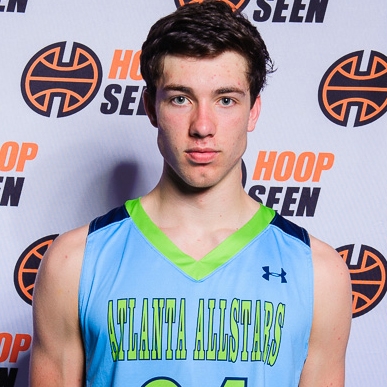 Can you believe it? Back in April, Evan Cole, a 6-foot-7, blue-collared big man, listed zero offers to date. Fast-forward to the current moment and the Peach State native has over a handful topped off with priority attention from those involved.

While he is a bit undersized for the power forward spot, Cole is a deceptive athlete at the basket but it is his nose for the basketball, tremendous hands and touch in the lane, and evolving ball skills that make the Atlanta All-Stars prospect unique and a major standout each time out.

To kick the event off for his Georgia-based squad, Cole went to the glass with a vengeance. He repeatedly brought down a few rebounds on single possessions alone and it was his willingness to fight it out within the trenches and the ability to play make some within the open floor that makes Cole a fun and entertaining watch.

On the recruiting front, Cole has taken notice of one Southern Conference frontrunner. “Wofford probably talks to me the most,” he stated. “I took a visit in May. They have a really good program.”

With a father that once suited up at Georgia State and a grandfather that is currently the athletic director at Mercer, two visits are in mind for the super hard playing and high level rebounder. “I will definitely take official visits to Wofford and Furman next month or so,” he told HoopSeen.

Regardless of where he calls home, expect Cole to be an immediate energy giver and producer straight out of the gates due to his unlimited reserves of toughness and IQ for the game.

Difficult not to speak on Brion Whitley after what he did all day long here in Suwanee as the 6-foot-5 wing is ready-made for the college level. He is mature on and off the floor, has rapidly developed his outside jumper, and never shies away from the big moment; get set for a major break out with the Sunshine State native this weekend.

While he might not pass the looks test, Grayson Murphy gets the job done each time out. The sub 6-foot guard plays with a major chip on his shoulder but it is his feel for the game along with IQ in understanding when to attack, pass, or shoot it, which stands out the most.

Michael McDougal had a great showing for his Team Blueprint squad out of Florida. The 5-foot-9 guard lacks the ideal size at the lead guard spot but he is super quick and elusive with the basketball and has become a priority for the Stetson basketball program.

The stands were packed on Thursday where we spotted head coaches from TCU, WKU, Youngstown State, Rhode Island, Belmont, Georgia Tech, MTSU, Georgia State, Furman, Stetson, Wofford, UTC, and Charlotte, along with a bevy of assistants from the likes of UCF, USF, Dayton, Murray State, Old Dominion, Appalachian State, Austin Peay, UMES, Seton Hall, along with a slew of others.