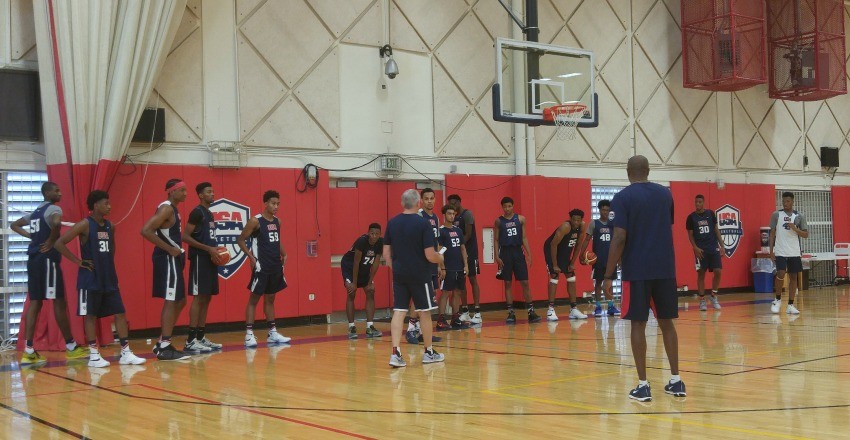 The USA U17 team took its final shape on Tuesday afternoon as the last cuts were made as things are now down to a group of 12. The roster shapes up to be one chock full of play makers, shooters, rebounders, and versatile defenders. While the loss of Cameron Reddish may sting a bit as the sophomore small forward went down due to a groin injury, the talent base on the roster looks more than promising in leading to another gold medal run.

The squad will now go through several more days of practices before they kick things off in Spain next week. Before they do so, let’s indulge on some of the raw, fresh thoughts on the group of 12 that is now at hand.

There are only three, true 5-men on this roster including the likes of Wendell Carter, Austin Wiley, and Carte’Are Gordon. Wiley has been suffering through some knee pains here in Colorado Springs which brings us to the idea that the coaching staff may opt to go small throughout several spurts during its play overseas.

Hence, guys like Kevin Knox and Troy Brown step to the forefront even further. Both are mix and match types that can play various spots all throughout the floor. While Knox is more suited for any of the frontcourt positions and is one of the biggest matchup issues in all of the land, heck, maybe the world at the U17 level, Brown has us thinking some.

The Las Vegas native has spoken in the past about wanting to play on the ball as the 6-foot-6 junior can play make from off the bounce. However, he is a versatile defender that has a penchant for coming up with rebounds against opponents much bigger than him. Why not go super small and use Brown at the power forward spots in minor spurts? While the size on the lineup sheet might not be overwhelming, a death lineup with Brown at the four-spot could create dynamic matchup issues throughout the hardwood.

One thing that kept jumping off the floor throughout my stay in Colorado Springs is the amount of play makers on this roster. Whether it is at the lead guard, or all the way down to the power forward position, entertaining ball is definitely not lacking with this group of premier prospects.

Coming into the week, we knew all about the upside and versatility out of Troy Brown, Javonte Smart, Markus Howard, and Kevin Knox. However, it has been the play of Collin Sexton and Immanuel Quickley that has greatly impressed and furthermore, added another layer to this group.

Sexton, quite possibly the best scoring option in all of America, has bought into being more than just a shooter. He has made the proper pass off of the high ball screen and can create for himself and others on the hesitation drive to the basket. His outside jumper hasn’t been the best but his scoring prowess in the lane paired with the now added ability to hit the open teammate near the rim leads to difficult defensive assignments for his international peers.

While Sexton has impressed with his scoring and competitive edge, Immanuel Quickley has dominated at times and has been the top stock boosters here in the Rockies. Blessed with great size and unreal quickness as he gets to top gear in a heartbeat, by each passing second on the floor, the Baltimore native becomes that much more confident. He buys into making others better from off the deck and is elite out of the pick and roll. Throw in the fact that 2018 guard has made the open jumper when presented to him and it seems like Quickley could be an excellent pairing to any backcourt set that he is thrown into.

Reaching back to the topic of the lacking amount of true 5-men on this roster, there is more than enough power forwards and face-up bigs. Jordan Brown has a Tim Duncan-like, face-up jumper out to 15-feet, Jaren Jackson has shades of Channing Frye to him as he is nearly automatic from off of the pick and pop, and even Carter and Wiley can step out and hit the jumper to 17-feet.

With its wealth of big men that can hit the mid-range jumper, it should bring that much more driving lanes for guys like Sexton, Quickley, Smart, and Howard. Expect for opposing bunches foul counts to skyrocket through the roof, especially with Sexton on the floor, who is a baby James Harden of sorts in getting to the stripe.

Further, whenever Markus Howard will be placed off of the ball and into the role that he is best served for him, that is a scoring punch from off the wings on the perimeter, along with the group’s top scoring from last year in elite scorer of the ball Gary Trent, early offense scoring shouldn’t be much of an issue. If opposing groups will look to slow things down, not an issue at all, as Wiley and Carter can both have things run through them on the block as each are polished with their back to the basket but can also make the proper pass out of the double team.

This should be one, fun group to watch in the coming weeks and the hopes are for another gold medal run. Without further or do, we give you the final 12.