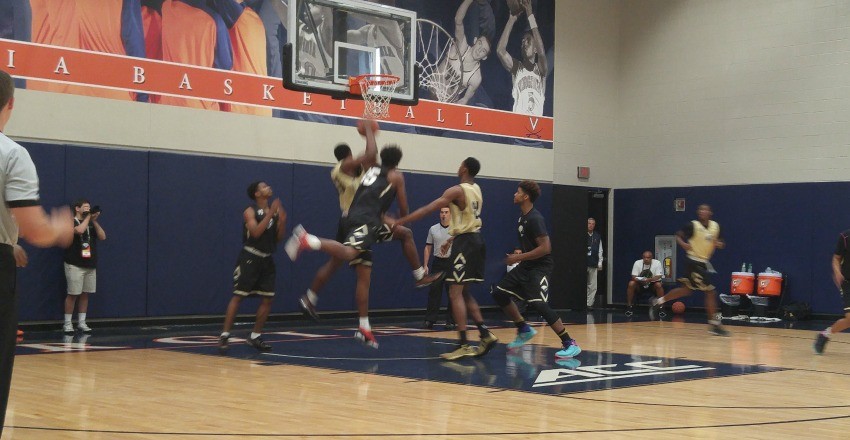 A full days worth of drills and games took place at the NBPA Top 100 Camp on Friday. The University of Virginia is once again the epicenter of some of the top talent that the nation has to offer where the best went head to head at John Paul Jones Arena.

Guard play has become so important and vital lately that we have become to not value properly the true, typical power forward and center that the college and NBA ranks showcased back in the 1990s and early 200s. However, some of the more productive ballplayers here at the camp have displayed some toughness within the trenches, a nose for the ball on the glass, and a sturdy skillset in putting the ball through the basket. No one did it better than Aamir Simms and is prolific performance that got the day going in the back gym at the JPJ.

STAR OF THE DAY

AAMIR SIMMS, PF, TEAM LOADED VA, 2017: One of the very best that there is from the state of Virginia, Simms had it working all day long but it was his first half of his first contest that made a major statement to those around. Coming off the bench for his squad, the rising senior went immediately to the glass as he worked as a vacuum of sorts bringing down everything within grasp. Finishing with 13 rebounds and 12 points in the first stanza alone, all that Simms did the rest of the way was make plays out of his area and run the floor for the nice throw down on the break. Much slimmer and more nimble around the basket, I will take a 14 points, 21 rebounds performance any day of the week, just as he did during his highlight outing on Friday.

SCHOOLS IN THE MIX: Giant group including the likes of Clemson, Iowa State, Virginia Tech, Georgetown, Pitt, UCF, among others

CHARLES BASSEY, C, NIKE TEAM TEXAS, 2019: Is there a better long term prospect in all of the 2019 class than Charles Bassey? That is still up for debate but he definitely has made a statement this weekend against guys two or three class grades above him. Sporting ideal length and a fine motor as he runs rim to rim with a major purpose, Bassey didn’t show off much of a back to the basket game or ball skills throughout the day, though he did play to his strengths each time down the floor. They are going to have to repaint the box on the backboards as the 6-foot-10 gazelle of an athlete repeatedly went up and snatched the ball 11-feet off of the floor and wasn’t afraid to pin opponents shots at a similar spot. Built in the mold of a young Tristan Thompson, these next few years of skill development are crucial with Bassey but the raw tangibles and paint domination make the 2019 prospect elite.

SCHOOLS IN THE MIX: Still very early in the process, though Kansas has jumped in early

EVAN BATTEY, PF, DREAM VISION, 2017: If you are going off of the looks test alone, Evan Battey might not get all of the respect that he properly warrants. However, after watching the 2017 forward for two full days now and the production that he brings to the floor, no one has done it better here each time out than the Dream Vision forward. While he does have to get his weight down some, Battey is deceptively nimble around the basket and can actually get off of his feet on the shot block attempt, or even on the gritty conversion through contact off of his feet. Multi-dimensional, Battey can step out and hit the 3-point jumper on one possession, post up and score with good footwork around the basket on the next, and follow it up with precise passes facing the basket. All in all, the 6-foot-7 rising senior just gets it done and there is something to be said for a steady producer at a loaded camp like this.

DANIEL GAFFORD, C, WINGS ELITE, 2017: When we talk about some of the top 5-men in the 2017 class, guys like DeAndre Ayton, Wendell Carter, and Mo Bamba come to mind. The list goes doesn’t just stop there and while those three are considered elite, it is about time we start giving our respects to Daniel Gafford. Having committed early in the process to the in-state Arkansas Razorbacks programs, the 6-foot-10 center has continued to improve while remaining true to what he does best. A fine rim protector that sports great length and mobility in getting up and down the floor, Gafford is going to be a fine producer in the SEC for years to come. On Friday, the Wings star went to work on the glass corralling nine boards in all and scored on emphatic dunks in traffic and putback chances on the weakside. He is the perfect fit for Mike Anderson’s up and down system in Fayetteville and should be an immediate producer with further upside once he gets to campus next fall.

SCHOOLS IN THE MIX: Committed to Arkansas

JAIRUS HAMILTON, SF, TEAM LOADED NC, 2018: After having a solid go of it on Thursday, Hamilton was back at it on Friday scoring the ball with major efficiency and the catalyst for his team’s W in overtime to end the evening. While he isn’t a drop dead outside shooter, the Carolina native can still score it whenever he is left open but it his slicing and finishing abilities at the basket that has made Hamilton a tough check. He has an ideal, chiseled body that seems like he could suit up Sunday in the NBA Finals and a sturdy mindset each time he hits the floor. A complete outing of 24 points and five rebounds off of over 60-percent shooting from the field shows just how good the Team Loaded star is and can be moving ahead.

RAYSHAUN HAMMONDS, SF, ALABAMA CHALLENGE, 2017: Giving the run this spring with the out of state Alabama Challenge gang, the Georgia native has turned into becoming a ballplayer, rather than just a prospect with upside. His production and final numbers on the stat sheet have become consistent across the board just as they were Friday at UVA. The 6-foot-7 play making forward can score the ball with the best of them on the downhill drive to the basket but is has been his improved jumper that has made him a nightmare to guard him in the half-court. After sending his game into overtime after a catch, upfake, one-dribble 22-foot jumper at the buzzer to tie it, Hammonds continued to help his team in OT as he finished in all with 19 points and nine rebounds; he has had one of the better weeks out of any prospect here at the NBPA Top 100.

SCHOOLS IN THE MIX: A lot of talk of Alabama and Georgia where others like Auburn and Florida remain involved; SEC likely conference for play

CHOL MARIAL, C, CBC, 2019: We talk about finding that unique prospect, the guy that has something that no one else does. Chol Marial is one of those types where the mobile and agile 7-footer sports a 7-foot-9 wingspan, yet has the lateral abilities that allow for him wall off a ball screen properly. While he is still a bit shaky on the offensive end whenever he has the ball within crowded spaces, there aren’t many better shot changers around the high school ranks on the national side than the CBC star. He runs the floor like a gazelle, is super quick off of his feet, and can use either hand already near the basket. Eight points and seven rebounds doesn’t tell the whole story about Marial on Friday as the 2019 stud left a giant fingerprint on the game through scare tactics and a polished motor that never turned off all game long.

SCHOOLS IN THE MIX: Early in the process but UConn looks to be out in front early on

CHUMA OKEKE, F, GEORGIA STARS, 2017: It is a bit difficult to pigeon hole Chuma Okeke into a particular spot on the playing floor. Rather, the Westlake High star should primarily be seen as a ballplayer that can do a plethora of things for his squad on the hardwood. Blessed with long arms and an improving body, the Peach State native can act as a point forward at times and is deadly once he receives the ball in the high post. On Friday, Okeke showed off extended range on his jumper, superb vision and passing skills from off the bounce, and some buy-in on the defensive end, all of which accumulated to a 15 points and four rebounds affair, along with a few assists and rebounds tossed into the mix.

SCHOOLS IN THE MIX: Still early in the process but spoke highly of Florida, Florida State, Auburn, Georgia, and Kansas

BOURAMA SIDIBE, C, WE R1, 2017: While his final box score tallies didn’t paint the entire picture for Sidibe in his late night session, it is quite remarkable the progressions the 6-foot-9 center has made within the past calendar year. Thought of primarily as a raw, energy giver down low that could protect his team’s basket, the reclassed 2017 big man has improved dramatically. He can step out and hit the short corner jumper out to 15-feet, has fine touch near the rim, and can now score over either shoulder while heavily guarded. Throw in his well-oiled motor and the We R1 product has the chance to absolutely blow up this summer due to the always lacking crop of energy giving big men that can score with their backs to the basket.

SCHOOLS IN THE MIX: Fluid recruitment after the reclass with Syracuse, SMU, VCU, Oklahoma, WVU, Seton Hall, Maryland, Arizona State in the mix

ZION WILLIAMSON, F, GAME ELITE, 2018: While he didn’t get to show off much of his ball skills to end the evening in Charlottesville, the South Carolina native did it all for his squad from 15-feet and in. After having grown over three inches and adding close to 35-pounds to his frame, Zion Williamson has been a nuisance for his opposing counterparts all spring long. This week, the Game Elite star has stepped his game up even further as he leads the camp in scoring by over three points per game aided by his 23 points and 10 rebounds affair on Friday evening. The lefty is one of the most consistent producers around and is an animal around the basket. He is super explosive and can throw down the dunk on any type of defender,uses his backside well on the block in playing angles appropriately on the drop step prior to the lefty hook, and rebounds it in traffic, all of which determines that Williamson is elite and one of the very best within his class nationally.

SCHOOLS IN THE MIX: Just beginning to become a national name where the bluebloods are beginning to get involved; has family pedigree that tracks back to the Clemson basketball program