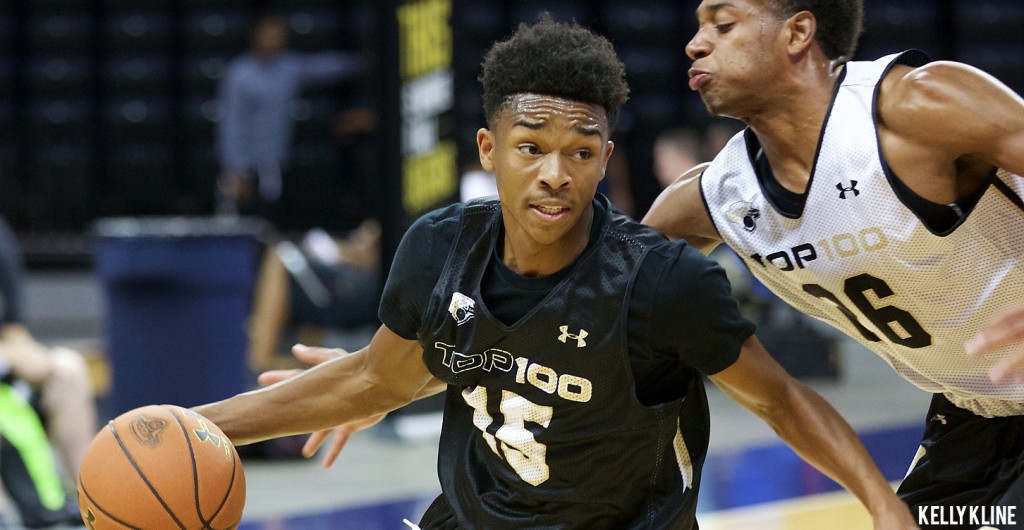 With the NBPA Top 100 Camp now behind us, we look back at the top performers from the invite-only event. Our team unloads their notes from Charlottesville, Virginia. Here is part two of our top overall performers.

Evan Battey, PF, 2017: You want to talk about a unique prospect? Evan Battey was the biggest stock booster from the week that was spent in Charlottesville. The 6-foot-7, 270-pound big man caused major headaches in the half court setting as he showed off a consistent jumper out to 20-feet, glue-like hands on the glass, and on-point, precise passes facing the basket. Deceptively nimble and light off of his feet where the west coast recruit is aided by an extra long wingspan, Battey can score through contact, protect his basket, and produce within the bigger bodies, all of which made the Dream Vision star a giant stock booster and star at the prestigious camp. - Corey Evans

Jaylen Hands, PG, 2017 - The UCLA commit was one of the best overall guards in the camp. He started strong and mixed up speed, scoring, passing, defending and balance throughout the camp. Every time we’ve seen Hands play this season, he’s shined. That consistency is the foundation for the thought of his position in the McDonald’s All-American game (and the like) after the high school season ends. One of the true speed demons in the class, Hands was one of the toughest players to stay in front of at the camp. All and all, Hands was terrific in Charlottesville. - Justin Young

Alex OConnell, SG, 2017 - Buckets. Lots of buckets. The Atlanta area guard made lots of them. The 6-foot-5 guard found his spots to score all week long in Charlottesville and got in jumpers, scored with drives, shined in transition and played well off his team’s good guard play. O’Connell continues to round out his game as an offensive player and he’s proving himself as one of the top overall scorers in the class of 2017. He’s been a heavily recruited player for a while now and it will be interesting to see which schools make him a first week priority in July during the live recruiting period. O’Connell finished the week as one of the top dozen players in camp and made believers in the process. - Justin Young

Donnie Tillman, WF, 2017: One of the good things about a big stage is a big opportunity. Tillman took full advantage of such a moment. Tillman opened up camp with a bang, scoring junk yard dog buckets, grabbing rebounds, running the floor and working hard on defense. He was the ultimate role player that shined with production. In a camp setting featuring equal talent, sometimes the biggest separating factor is effort. Tillman played with plenty of that. He came in with great purpose and delivered a performance that caught our attention time and time again. He and Battey (featured above) were our two biggest surprises (neither guy is on our HoopSeen125 ranking for the class of 2017). - Justin Young