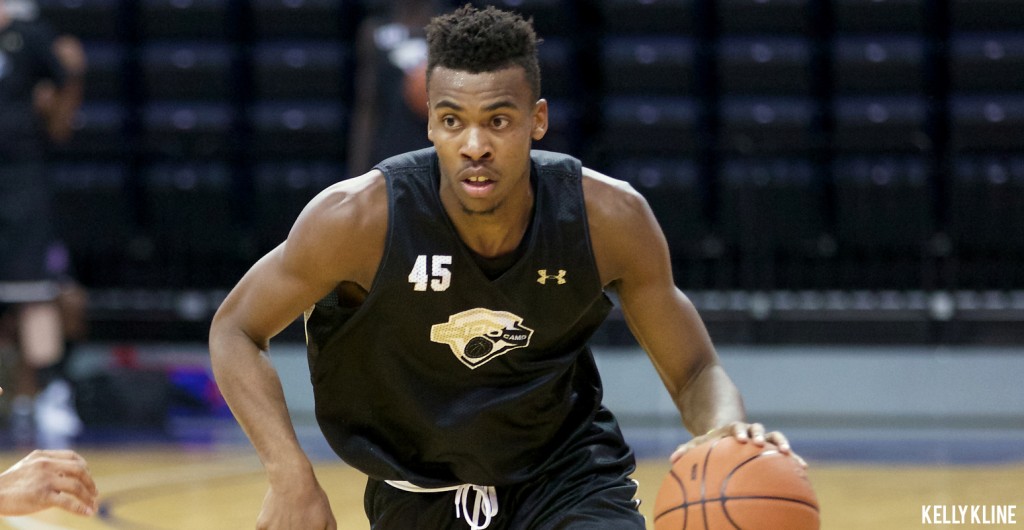 With the NBPA Top 100 Camp now behind us, we look back at the top performers from the invite-only event. Our team unloads their notes from Charlottesville, Virginia.

Paul Scruggs, CG, 2017 (pictured above) - As one of the highest rated players from the class of 2017 in the field, you’d expect production and leadership from the Indiana native. Scruggs provided both at the invite-only camp. The powerfully built 6-foot-3 combo guard averaged 12.4 point per game, 4.9 rebounds, 2.4 assists and 1.8 steals throughout the camp. Scruggs shined at both guard positions and played well on both ends of the floor. Few players had more success as a scorer, passer, defender and rebounder than him. All and all, just a terrific week of work from the top 30 national prospect. - Justin Young

Aamir Simms, PF, 2017: Simms has been a relatively well known name now throughout the Mid-Atlantic and while he hasn't gotten the greatest of attention this spring, expect for all of that to change this summer. The 6-foot-8 rising senior was a man amongst boys at times where he dominated his area on the glass and even made for impressive plays from outside of it. In one half alone, Simms accumulated 13 rebounds before finishing with 21 in all. He led the entire camp in rebounds, a stat that seemingly translates the greatest to the next level. The Team Loaded product is much more svelte and conditioned and he proved his buy-in this weekend as a major stand out within his own state. - Corey Evans

Tremont Waters, PG, 2017: The New Haven, Connecticut native was quite impressive all week long at John Paul Jones Arena as the quick and diminutive guard ran his team like a five-star quarterback recruit in the backfield. A one time, score first type at the lead guard spot, Waters has bettered his decision making abilities along with setting down and comprehending the time and place to run his team's half court offense. Make no mistakes about it though, as Waters can still score it in bunches but he has become deadly off of the pick and roll, devastating at the basket on hard nosed finishes, and a nuisance as an on ball defender. Add it all up and the South Kent star is a top tier floor general in the 2017 class as he did nothing to hurt his national standing during his time in Virginia. - Corey Evans

Nick Weatherspoon, CG, 2017 - We’ve been banging on the drum long enough so forgive us for sounding repetitive here but the Mississippi guard is one of the premiere guards in the class of 2017 and worthy of consistent praise. The 6-foot-2 guard averaged 11.6 points 3.1 rebounds and 1.8 assists at camp. Moreover, Weatherspoon saved his best performances for the final day of camp. That’s hard to do in a rugged schedule like NBPA Top 100 Camp. He’s an elite athlete that can play multiple positions and have success at both. We’ve been an advocate for his inclusion to the post-season all-star games. He proved such value this week. - Justin Young