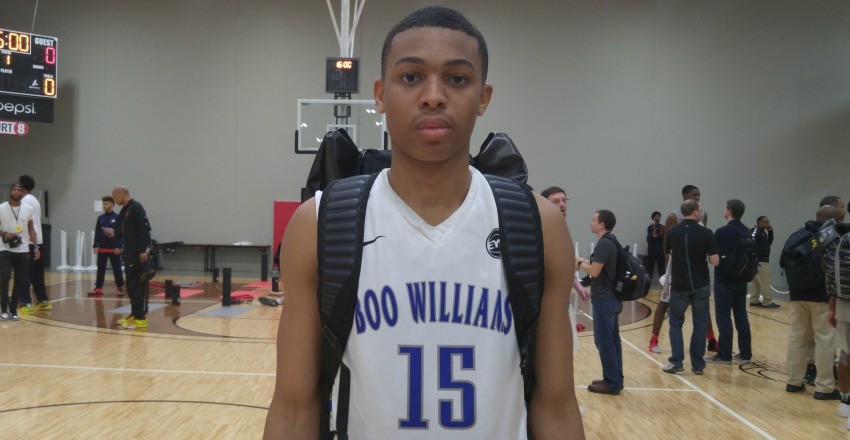 The Hoop Group Southern Jam Fest delivered once again as it brought in some of the best teams and prospects throughout the Mid-Atlantic region. The three day event took place in Hampton, Virginia and at the Boo Williams Sportsplex as all three shoe sponsored companies were well represented along with several of the other better non-sponsored bunches. After sifting through the notebook, there was much learned from the weekend that was but the play of Keldon Johnson stood out the most. 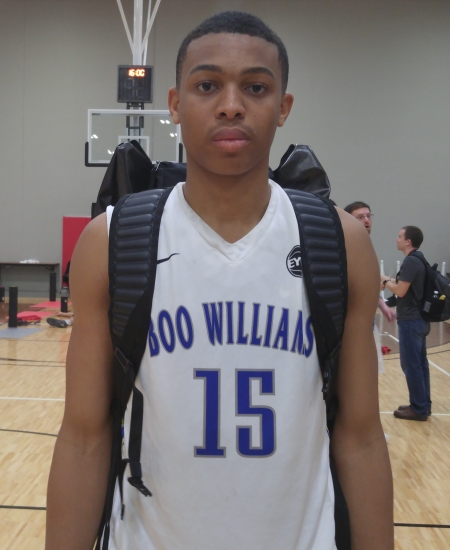 Keldon Johnson is a bucket getter…that is practically the same as stating that the sky is blue. Over the weekend and in his home state, the 6-foot-5 wing showed out once again. Playing up a year on the 17-under platform, the Boo Williams sophomore did it all throughout the three day event.

While he is still hindered a bit by a wrist injury, Johnson showed the willingness to compete in each contest that he suited up in. After breaking the state’s freshman scoring record a year ago, the play making sophomore has rapidly developed his ball skills where, when need-be, can slide over onto the  ball and be a facilitator of sorts within the half-court offense.

The Boo Williams star wasn’t hitting from deep and needs to gain further consistency on his catch and shoot jumper, though he displays a super polished mid-range game and has gotten much, much better on the hard drive and finish through contact at the lid. He is a deceptive leaper at the basket and doesn’t shy away from physicality on the playing floor. Whenever the game’s stakes are in play, Johnson can step up and produce further, displaying some alpha-dog materials that should really work down the road whenever he is at the highest level that the sport encompasses.

The brother of current Georgetown freshman forward Kaleb Johnson, Keldon will have the pick of the litter when it comes time to select a college to attend. In the meantime, the number-10 ranked sophomore in the 2018 HoopSeen Rankings continues to improve and it seems that the Park View High standout’s best basketball is very far off in the distance, which speaks more about how good the Boo can be.

Some kids decide to reclass for various reasons. Whichever the case may be, the added year of development becomes crucial in the prospects recruitment. Three ballplayers each suited up this weekend that were originally part of the 2016 class, yet seem to be set on becoming members of the 2017 class, of which should allow for a more heightened college recruitment.

Antwan Walker, a 6-foot-7 forward out of the DC area, was a relative unknown to most back in the fall. However, after helping lead his HD Woodson bunch to a championship run in the winter, the Team Loaded VA star will head off to a prep school this fall and should see a priority placed onto him and from some of the best throughout the east coast.

While Walker could have gone the high-major route as a late spring signee, the DMV recruit will now enter himself into a recruitment where he can pick from some of a litany of schools throughout the nation. A giant, face-up 4-man with toughness, athleticism, and an improving skillset, Walker tracks as a top-125 recruit within the 2017 class and will be seen the next time our updated rankings are released.

Remaining in the DC area, Naji Marshall is another 2016 graduate who will attend Hargrave Military Academy in the fall. Sure, the 6-foot-6 small forward is more than ready to help out at the high-major level in the coming months, but the fact that he will get another year to further his game and skillset will only cause greater havoc for his opponents at the college level.

Virginia Tech, Xavier, Miami, Cincinnati, and Pitt are the five most talked about programs about the prepping wing and wherever the soon-to-be Roosevelt High grad lands, look for Marshall to leave an immediate fingerprint at the school of his choosing.

Lastly, Bourama Sidibe has shown remarkable development over the past few months. After getting a glimpse of the 6-foot-9 center out of St. Benedict’s back in January, I was impressed with the big man’s motor in running the floor, changing shots at the basket, and in rebounding his area on the glass. Although, he was more of an energy giving center rather than a low post threat with his back to the basket.

Now that Sidibe is fully a member of the 2017 class as he will remain at the Jersey-based school this winter, he should see his stock really improve in the coming months. The mobile center has really developed a back to the rim game as he can now score over either shoulder and even face-up and hit the baby jumper. Syracuse, Seton Hall, Arizona State, VCU, and SMU are among the schools involved with the now member of the 2017 class, a frontcourt piece that will become more and more valuable as he acclimates himself further to the American terrain.

FUTURE IS SUPER BRIGHT IN MID-ATLANTIC

Sure, there is a lot of talk about the loaded 2016 class that will be headed to a college campus in the coming weeks and months. Along with it, the national media is transitioning itself to the 2017 class with what should bring a handful of stars to the basketball landscape. However, the 2018 and 2019 classes on the east coast, and more importantly, those throughout the Mid-Atlantic and the DMV, look more than promising.

During the weekend that was, some of the future stars of the game hit the floor at Boo Williams Sportsplex displaying massive upside and potential. Whether you need a few star studded lead guards, a couple of tough and athletic wings, or an impressive big man who can do a bevy of things from 20-feet and in, here is 15 names that caught our eye from our time in Virginia.