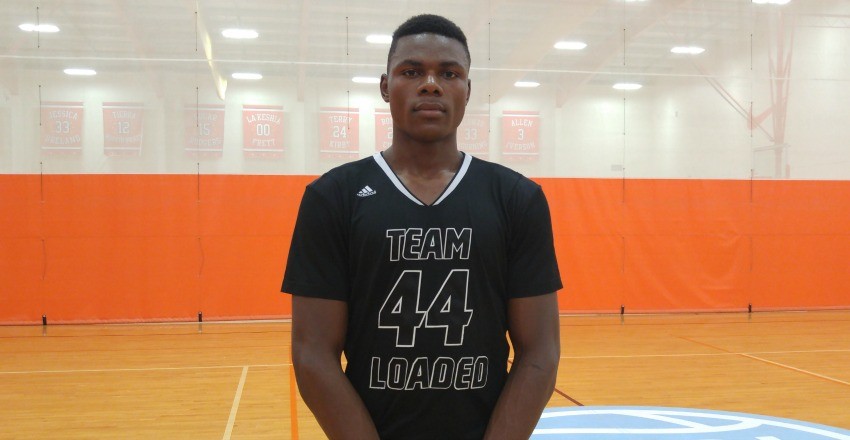 It was a full day of hoops at the Hoop Group Southern Jam Fest on Saturday and as the day got older, the matchups heated up. Some of the better programs throughout the east coast hit the floor at the Boo Williams Sportsplex in Hampton, Virginia, but it was the play of Ejike Obinna and Oscar Tshebwe that stood out the most.

It was getting late on Saturday evening and like every travel tournament weekend, the eyes were getting heavy and all that you’re wanting is a good meal and a soft bed. However, after receiving a quick nudge to chase after a 15-under game, getting a glimpse of Oscar Tshebwe was all worth it where the fatigue and grogginess went suddenly away.

Very rarely do you spot a coordinated and active, 6-foot-8 and 245-pound big man on the 15-under level. Tshebwe is just that as the native of Congo, who has now been in United States for six months, was practically dominant around the basket. Competing with a solid motor and running the floor with ease, the Team Loaded VA product’s bread is buttered around the basket where the freshman center doesn’t shy away from stamping his name onto the painted region.

Attending Mountain Mission School in Granby, Virginia, expect to hear much more about the Congo native. He practically blocks everything in the lane and comes down with every 50-50 basketball and rebound within crowded spaces. While he failed to show off a back to the basket game, the Loaded star was still able to produce on the final stat sheet by way of his efficient and steady 21 points.

While there isn’t a ton known about the star in the 2019 class just yet, he has the makings of a special college prospect. He understands his strengths, plays directly into them, and is willing to do a lot of the dirty work in assuring that the rest of his teammates can just play their own games. Tshebwe made strides Saturday evening in Hampton, Virginia, and while skill development is needed moving ahead, the upside is quite impressive for the capable top-50 recruit within the rising sophomore ranks. 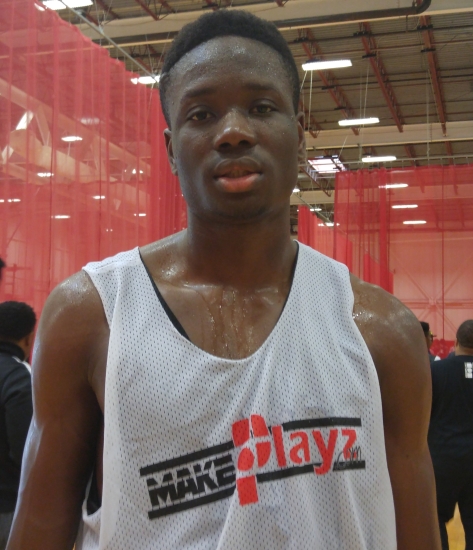 Heading into the event, things looked enticing as DC Premier and the Uncommon Bulls were already set to face each other in the second round of bracket play. That meant an unbelievable, dynamic duel between two of the best big men on the east coast in Nate Watson, one of the biggest stock boosting bigs this past spring, and Ejike Obinna. The latter won out and despite the loss, the Virginia Academy center made a giant statement that impressed everyone in attendance.

A 6-foot-9, mobile and active big man with a major mean streak on the hardwood, Obinna was sensational from tip to finish. He ran the floor with a purpose, gobbled up rebound after rebound, finished at the basket, but most of all, did a commendable job of protecting his basket and giving up little to no room within the interior to Watson and his Premier teammates.

Obinna set the tone early on by blocking shot after shot and by the time the second half rolled around, his opponents knew that if they were to attack the rim, that more than not, their shots were going to be changed to a certain degree. The Uncommon Bulls 5-man has also made strides on the offensive end as he hit a turn, rip, jab, and step-back jumper from the high post, made good seals and scores in traffic, and showed off quality vision and passing skills out of high-low sets.

While the majority of the ACC has already jumped on board with Obinna, expect for the rising senior’s recruitment to hit the next level as a priority, wanted, and most of all, needed recruit within the 2017 class this summer.

This spring, not many out of the DMV have used the travel circuit better than Darryl Morsell in enhancing their own respective college recruitments. The 6-foot-4, play making and tough-nosed guard out of Mount St. Joseph High School in Baltimore, Maryland, had another quality day on Saturday leading his team on the scoreboard and in wearing many different hats for his Team Melo 17-under bunch.

Taking his game to the next level these past several weeks, Morsell is best in having the ball in his hands as a jumbo facilitator of his team half-court offense. He can shoot it a bit off of the pull and from off the catch when placed off of the ball, though it seems like things happen for the better whenever the rock is placed into his hands within the half-court setting.

Already sporting a developed, college ready body that he uses on attacks to the basket, Morsell showcases a solid burst on the blow-by and excellent scoring abilities in the lane. He has the vision, awareness, and better yet, the willingness in creating for other and because of it, has seen his recruitment pick up. “Right now, I have offers from Temple, Dayton, George Mason, Davidson, UCF, La Salle, Towson, and Green Bay. Those are the main ones,” Morsell told HoopSeen.

While WVU, Pitt, Maryland, USC, and Miami are showing interest, a few visits are planned in the coming weeks. “I am going to Temple and La Salle the first week of June, George Mason the second week of June, and I am trying to schedule one to Dayton the third week,” the Melo star said. “I am also trying to get down to UCF in August.”

Two programs have begun to stand out with the Morsell, both of whom call the Atlantic 10 Conference home. “Dayton probably talks to me the most. They text me every day,” Morsell said. “George Mason is pretty consistent, too.”

Whatever the case, expect for Morsell’s recruitment to heat up even further as the summer months follow a similar order in the weeks ahead.