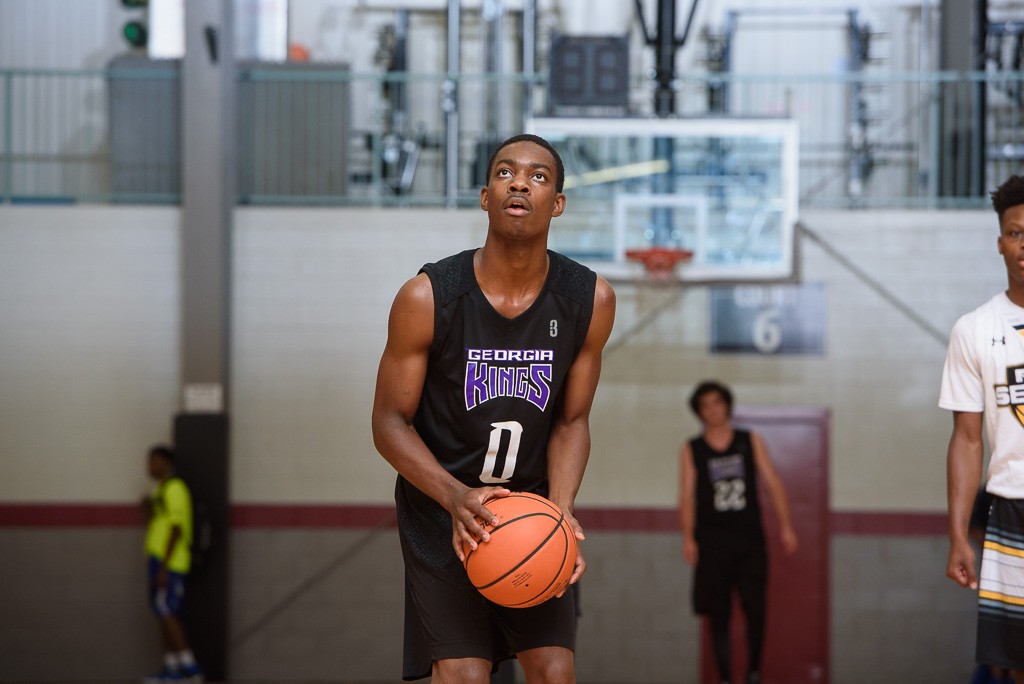 The Bob Gibbons Tournament of Champions is the perfect stage to break out of relative obscurity in heightening ones basketball stock. This past year was nothing out of the norm where some of the more under the radar types entered the fold as quality college prospects and recruits. Without further or do, we bring to you our top sleepers from the 17-under platform from the weekend that was.

Justice Goodloe, PG, Team Winston: Goodloe, a 2018 lead guard playing up with Team Winston, is a solid all around lead guard who loves to make plays with the ball in his hands. He got to the paint whenever he wanted, as he is quick off the dribble and has an array of moves to beat primary defenders. He caused problems for teams all weekend and there were not a lot of teams that could contain him and keep him from making plays for himself as well as his teammates. –Carter Wilson

Jaylon Hall, CG, Louisville Magic: Hall is the perfect example of a true sleeper prospect. The 6-foot-5 combo guard has gone largely unnoticed until the past few weeks. He starred with Western Kentucky Elite at the Atlanta Jam and he backed up that performance with a solid showing at Gibbons with the Louisville Magic. The long guard is smooth and fluid with his game, bringing versatility to the backcourt. Hall is a prospect with a rather mum recruitment right now, but by July he will be a buzzing prospect for mid-major programs. –Garrett Tucker

Javan Johnson, SF, Team Carroll: Johnson had a strong high school season but suffered a mild setback at the end of the year, as he fractured his growth, sidelining him for a few months. The 6-foot- forward was cleared to play in April and showed signs of rust during the live periods. However, at Gibbons, we saw a more calm and confident Johnson on the floor. He played within himself, knocking down shots and showcasing his smooth nature. He has a couple of scholarship offers in hand, but after a disappointing April, Johnson is a sleeping giant that could make some noise in July now that he is healthy. –Garrett Tucker

Demarcus Lampley, SG, Georgia Kings (pictured above): Like guys that win? Like guys that score? Lampley does both. He's coming off a great high school season and Central (AL) Phenix City and went to work for the Kings at the Gibbons. The 6-foot-2 guard can score with the best of them and doesn't back down to big-time match-ups. He's the type of guard that can, and will, be a part of a non-major team that wins at a high-major school's home court. Lampley has that type of ability and toughness to his game. He's done that in both school and travel and is trending towards the same kind of career in college. –Justin Young

Temetrius Morant, PG, Team South Carolina: What a break out weekend it was for Morant as the 6-foot-2 guard out of South Carolina showed major chops in stepping up his game during the most important moments of each game that he competed in. More of a scoring primary guard, Morant has a major, major burst to him on the attack to the basket and is unafraid of anyone that comes between himself and the basket. Displaying takeover abilities, Morant is one tough dude. He is someone that breathes fire on the playing floor and because of it, should see his stock soar this summer playing alongside Nic Claxton, a high-major big man on the Team South Carolina squad. –Corey Evans

Wes Morgan, SF, PSB Select Elite: There's room on every team for a shooter, and Morgan is most certainly that. He was one of the best three point shooters in the 17U division of Gibbons and provided some big shots that helped PSB get to the semifinals. With good size at about 6-foot-5 Morgan could easily be a point producer at the next level with his combination of size and shooting ability. Just after the weekend, Morgan committed to North Florida, adding another shooter to their recruiting class. –Carter Wilson

JaQuan Morris, SG, God's Property Elect: We've seen it all Georgia Cup season long with the long guard from Central Gwinnett (GA). He's been putting up big numbers and does so with great flair. The 6-foot-2 guard is incredibly fast, plays with good control and his confidence continues to grow. Morris opened the Bob Gibbons Tournament of Champions with a huge 29-point game and caught the eyes of our staff (again) with his play. Morris is playing very well this travel season and should be put on the sleeper list for low-majors in the South. –Justin Young

Musa Thompson, SG/SF, Atlanta Warriors: Having recently moved down to the Peach State from the northeast, Thompson made a major statement with his play at Gibbons. His versatility and toughness immediately jumps off of the floor as the hard-playing wing is willing to do whatever it takes for his squad to succeed, even if it means having to front the post down low in guarding an interior force sometimes six inches and forty pounds heavier. Thompson isn’t too raw either where he wields a decent perimeter jumper and can make for nice finishes off of the hard drive to the basket. There is little known of him at the moment on the college side, though that can and should all change as the summer months heats up. -Corey Evans