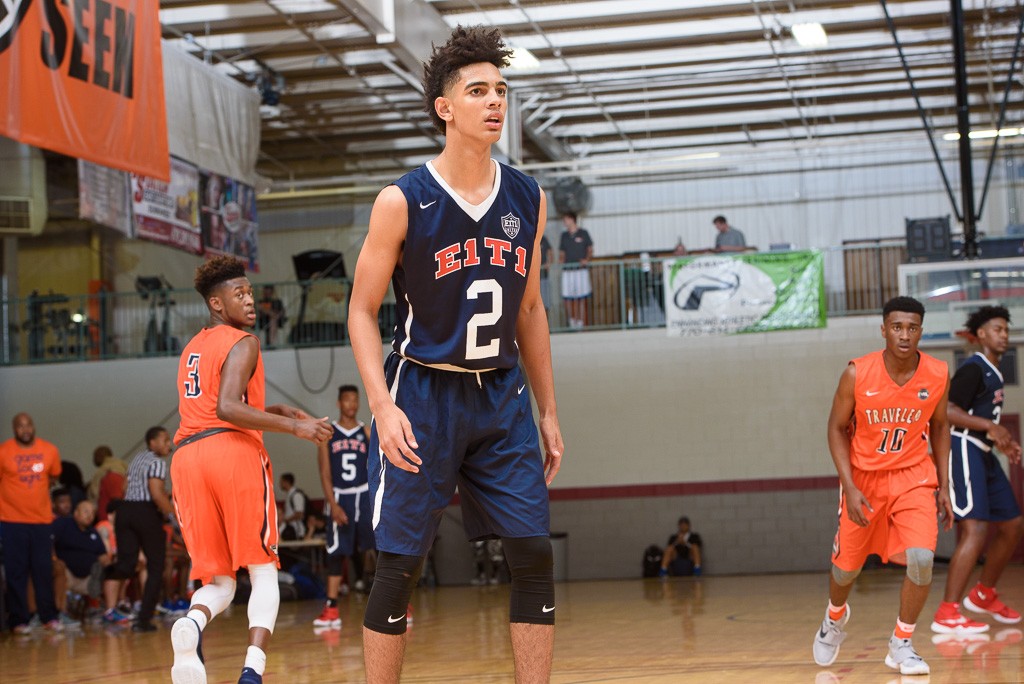 As we continue to look back at the 2016 Bob Gibbons Tournament of Champions, we wanted to break down the top overall performers from the 16 and under division. Our staff takes a look at five more players from the age group who stood out amongst their peers.

Rodgerick Brown, F, Team Thad: Motor, motor, motor, athleticism, athleticism, athleticism. That begins to describe the Memphis Cordova (TN) 2018 wing. Brown is noticeable when he enters the gym, with an already college-ready body. He is a full throttle player that is all over the floor making all kinds of things happen. He is a big time defender who locks down his given matchup as well as create turnovers to get out in transition, where he is nearly impossible to stop and can provide from huge plays above the rim. The Memphis area is loaded in the 2018 & 2019 classes, and he is one of the high level prospects in those classes. - Carter Wilson

Michael Devoe, SG, E1T1 (pictured): The long and lanky 6-foot-3 guard was the calming presence on the team that brought home the 16 and under division championship. Unflappable on the big stage, Devoe delivered under pressure throughout the event. He’s a capable ball-handler, confident shooter and effective rim attacker. The state of Florida continuously produces high-major guards and the Orlando area stud looks to be next. He was great at Gibbons. — Justin Young

Nelson Phillips, SF, Atlanta Xpress: Without Khavon Moore in the lineup this weekend, the Xpress were in need of a pick-me-up, and Phillips was the guy to provide that support. Phillips was at his best this weekend when he was getting to the rim, where his combination of size and strength allowed him to finish plays in the paint as well as draw a lot of fouls. His physical abilities form the small forward position make him a standout and a high level college prospect. He was one of the most physically imposing wings in the field. - Carter Wilson

Tyreek Smith, F, Flight Select: The Dallas Advanced Preparatory International (TX) forward showed that he has all the tools of a high level forward. The 2019 big man stood out from the get-go with his physicality and athleticism. He was a force on the block defensively, providing toughness, protecting the rim, and hitting the glass hard. Offensively, he finished off plays with emphasis with the help of some great set ups from his guards. With his size, athleticism, and strength, he could become a prospect to remember in the class of 2019 in Texas. - Carter Wilson

Sharone Wright Jr., CG, Karolina Khaos: One of the most polished offensive guards in the 16U bracket, Wright has the ability to change gears at the drop of a dime to help him get to the rim, where he finishes around bigger defenders and is not afraid to absorb contact. The West Florence (SC) plays with great basketball instincts and knows the right plays to make in a given situation. Defensively, he is able to use his length to make plays jumping passing lanes for steals as well as blocking shots. With his offensive skill set, size, and length, you get a top-100 player with the potential to become one of the most unique players in the country. - Carter Wilson