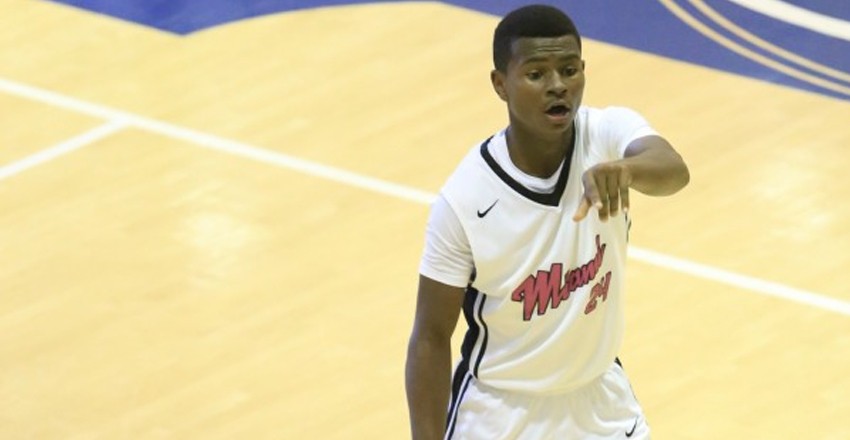 The 14 and under division of the Bob Gibbons Tournament of Champions was competitive and great preview of what is to come in the class of 2020. Here are the next five overall top performers from the age group.

Yusif Basa’ma, Miami City Ballers: The most head-turning center at Gibbons in the 14U division was Yusif Basa’ma, a 6-foot-8 human eraser. He set the tone on Friday night in a win over NOLA23 with his best performance of the weekend: 11 points, 17 rebounds and six blocks. Basa’ma altered countless shots when opponents drove the lane. His offensive game could use some refining, but he is mobile for his size and has some intriguing upside as he continues to grow into his frame.

Jamal Mashburn Jr., Miami City Ballers: Does the name look familiar? The former NBA All-Star’s son has got some game too. Junior doesn’t have the same size as dad, but baby Mash did a bang up job at the point guard position. The well-built floor general had a nice weekend knowing when to attack and when to dump it inside to Donnell Harris Jr. and the rest of his talented teammates. Mashburn finished well at the rim once he got into the paint and stretched the defense with his three-point shooting when warranted. His on-ball defense stood out as a strong point as well.

TJ McCants, Team Evans: Torianno “TJ” McCants showed off his versatility last weekend. With Team Evans’ top big man injured, McCants was forced to play inside when his natural position is more of a three/four. The new role didn’t hinder his performance against one of the most athletic frontlines in the division, Team Carroll. McCants contributed in every way possible, scoring 18 points while collecting eight rebounds, three assists, three steals and one block.

Callin Randolph, Team Heat Elite: When we first saw Team Heat Elite in the HoopSeen Super Regional, the North Carolina-based team cruised to the title but they were without point guard Callin Randolph. A healthy Randolph was on full display and teamed up brilliantly with guard Luke Stankavage in the backcourt. Much like Stankavage, Randolph is a knock-down shooter. He netted 16 points to go with his four rebounds and four assists in a win over Louisiana Dream Team Elite. Randolph has great handles with both hands and knows how to get his teammates involved.

Willie Screws, Team Carroll: Want a big guy that’s always in the mix? Willie Screws is your guy in the 14U division. Screws always has his hands on loose balls whether they are coming off the rim or on the floor. Screws is an athletic 6-foot-4 forward that crashes the offensive glass with authority. He pounded away at the boards to produce a 13-point, 14-rebound double-double in a win over Team Evans. He had three buckets alone off put-backs.