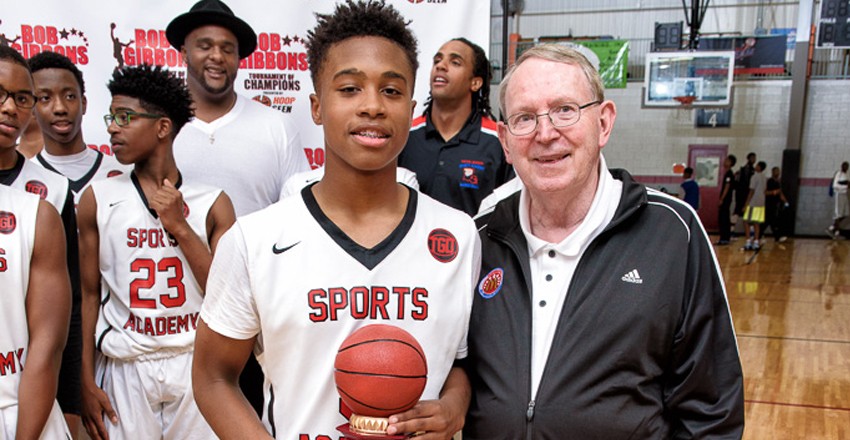 The 14 and under division of the Bob Gibbons Tournament of Champions was competitive and great preview of what is to come in the class of 2020. Here are the top five overall performers from the age group.

Joe Bamisile, Game Elite FL: The Richmond, VA native made his presence felt at Gibbons and nearly carried Game Elite FL to the championship. The silky smooth guard poured in 34 points in the Elite’s 67-62 loss to Sports Academy. Bamisile can heat up in a hurry and can fire the deep ball from all over. He was in attack mode early on in the championship game netting 19 first half points. Bamisile attempted 11 free throw attempts in his final game and finished the weekend as one of the division’s most explosive scorers.

Antwan Burnett, Montgomery Fire: It should come as no surprise to see Antwan Burnett’s name among the top performers at Gibbons if you have followed the Georgia Cup series this summer. At 6-foot-3, the forward can do it all. He has been the heart and soul of the Montgomery Fire and no performance better exemplified that than when he erupted on Saturday morning with a cool line of: 31 points, 12 rebounds, three assists and six steals.

Jalen Cook, Sports Academy Team Glen Davis (pictured): The best player on the best team, Jalen Cook was steady all weekend long consistently coming in as one of Sports Academy Team Glen Davis’s top scorers. Cook tallied a 24-point outburst this weekend and was in a groove all tournament. Sports Academy had four players score in double figures in the championship game and of course it was Cook leading the way with 14. He is a strong guard that can control the tempo and finish through contact when slashing into the lane. Cook went 8-of-10 from the foul line in the championship.

Donnell Harris Jr., Miami City Ballers: The Florida squad entered Gibbons as an intriguing team loaded with size and names. Jamal Mashburn Jr. was a steady scorer at point guard while Yusif Basa’ma ate up shots at the rim standing 6-foot-8, but Donnell Harris Jr. my attention the most. Harris stands about 6-foot-5 and terrorized opponents with his relentless attack of the rim. He was a double-double machine cleaning up misses and denying second-chance opportunities. He has the size and motor to contribute at the high school level right away.

Luke Stankavage,  Team Heat Elite: Cool hand Luke Stankavage did what he always does, make the right decision with the ball in his hands and get buckets when called upon. The sharp shooter did more than just stroke from behind the arc; he cut into the lane and hit floaters at a high clip. On Saturday morning he dropped 25 points in a 75-39 win over Louisiana Dream Team Elite. Stankavage is a coach’s best friend on the court in the fact that he rarely makes mistakes and is a sound fundamental defender.