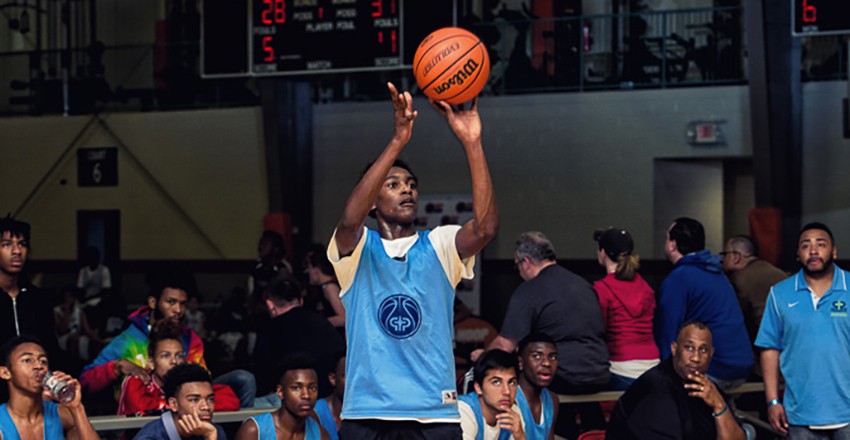 The Saturday slate at the Georgia Cup III is a busy one at Suwanee Sports Academy and there was a lot to discuss. We dive into the day’s action.

Andrew Melms took an in-bounds pass from one end to the other, made a Euro-Step into the middle of the paint to shake off his defender and scored an and-one play to give his Atlanta Warriors team a win over a good God’s Property Elect team. Melms, the starting point guard at Lambert High School, always seems to come up in the clutch.

This is how the Atlanta Warriors beat God's Property Elect. Andrew Melms with the icer. pic.twitter.com/055bu4iI4E

JaQuan Morris was terrific in a game-winner that was decided in the closing seconds of regulation. Morris put his team on his back and stormed back in the second half with terrific driving buckets. The Central Gwinnett guard has been one of the best guards in the 17U division of the Georgia Cup this season. He cemented home that opinion on Saturday morning.

Team Forrest guard Cam Armstrong is a multi-positional and ever-productive guard at the 15U level. The Douglasville Alexander player showed off a nice versatile skill set in a morning win. He has impressed this entire Georgia Cup circuit.

Warner Robins All-Stars came away with a very impressive 60-45 win over Team Atlanta in the evening session. Jam’l Dillard led the way with 20 points. The Warner Robins High School hooper has been good this week at the Georgia Cup.

Kobe Davis of the 12U East Point Runnin’ Rebels is one of the most consistent non high school players there is in the Georgia Cup this season.

Joseph McKay was great at the Super Regional. He was great today for the GA Kings. Had 19 points in W over GA Xclusive NW.

Atlanta Xpress Whetstone is rolling through the 12U division of the Georgia Cup this season. Really fun team to watch.

Zakary Thomas of Maegahoops was fun to watch. So much swagger in the 12U division. He made some big plays down the stretch to claim the win.