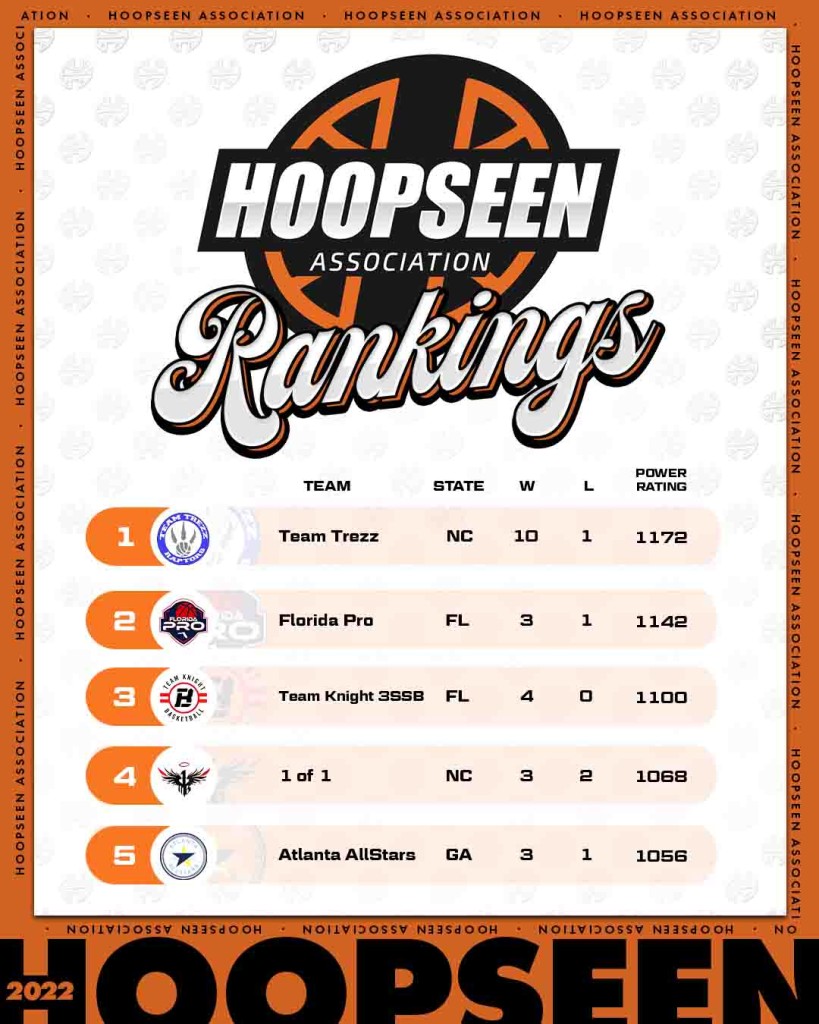 The spring travel season has a good month and a half of data into the algorithms and our HoopSeen Association power rankings are ready for the true debut of the 2022 season. Who stands at the top in the 17U, 16U and 15U divisions? Our team dives into the data. 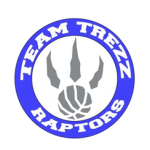 JY’s take: When you look at this team you see the length right away. The roster is full of dudes who can guard multiple positions and cause problems all over the floor on the defensive end of the floor. I think that’s why they’ve had the success they’ve had so far. They know how to work switches and how to guard inside and out. They showed their value in their hot stretch at the Carolina Jam and into the Grassroots Showcase. Their only loss in that stretch was to Mid Pro, arguably the top overall team in the Grassroots Basketball Association. I’m looking forward to seeing them at the Bob Gibbons Tournament of Champions. That platform honors winners. How will they withstand the grind of that bracket? - Justin Young

Stockriser: Trey Byrd has been the major stockriser to this point. He was sensational in Louisville and was recognized as a top performer. He’s got tantalizing size and length. We’ve seen him use both to assert himself on both ends of the floor. Byrd’s athleticism is off the charts too. If you let him get out in transition, you’ll see him soar. What made him particularly great in Louisville was some of the skill work he showed off. Byrd shot the ball well from the perimeter, made some high-level passes and reads, and showed a generally well-rounded skillset. - Josh Tec

Next in Line: Torey Alston and Tymaureon Outlaw are no-brainers to break out next. One could argue that they have already started to, but I think both will generate even more buzz as the summer goes on. Both have next-level size, length and athleticism. Alston falls in line with Byrd in terms of skillset. Rangy, disruptive wing/forward who generates a lot of deflections and excels in the open court. Outlaw is imposing and physical. When he goes up for a dunk, you worry about the rim. - Josh Tec 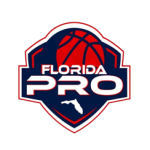 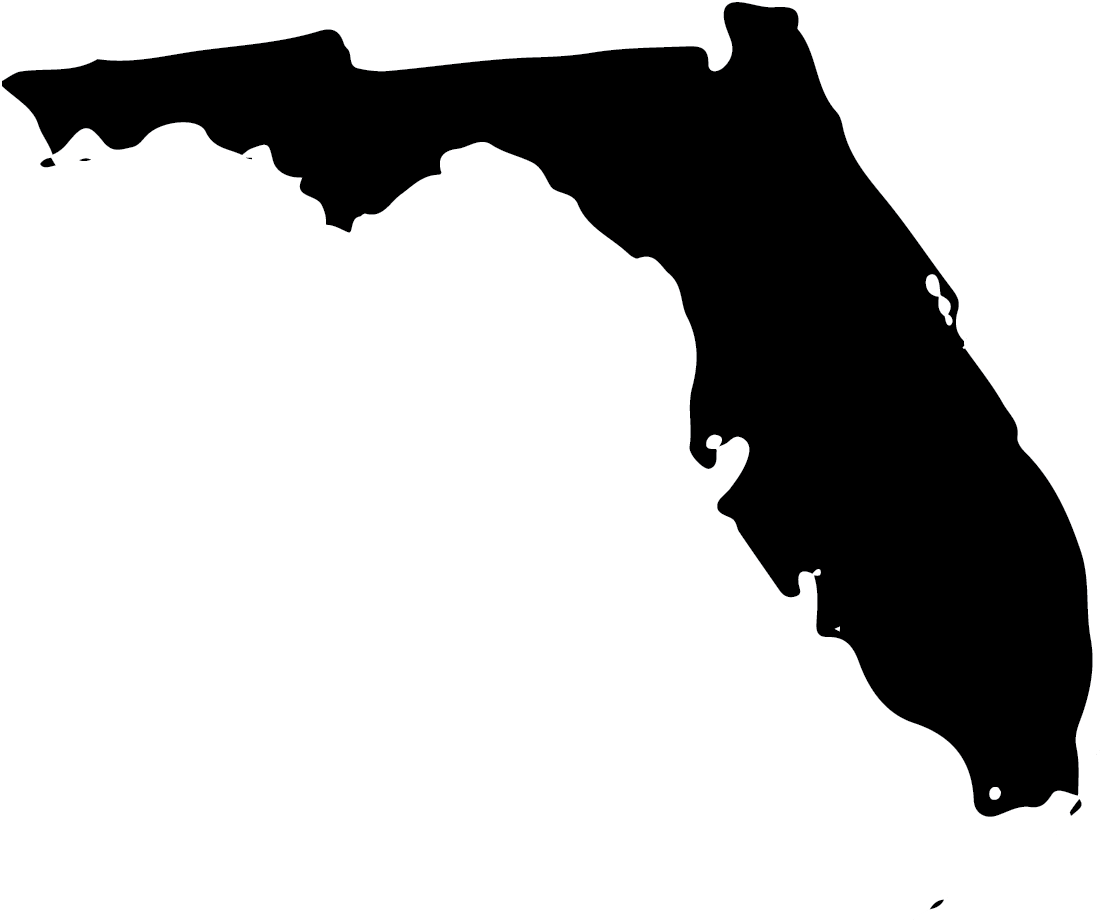 JY’s take: You know Florida PRO will also have a squad that competes and they’ll always have a player who surprises college coaches with their ability. This PRO team is an interesting one. We saw their team get better each and every game out at the Grassroots Showcase. In a matter of four games, they figured some things out and ended the action with a lot of optimism. What lies in store for them moving forward? Don’t be surprised if the roster has a couple more changes and their wins even more convincing in the process. - Justin Young

Stockriser: De’Shayne Montgomery opened some eyes with his play last weekend at the Grassroots Showcase. In big wins over George Hill Indy, 3D Empire, and Gain Elite, Montgomery was the best player for Florida Pro. The 6-foot-4 wing is an incredible athlete that makes a lot of his plays above the rim. In the game against 3D Empire, he had at least three consecutive slams to get his team going. Montgomery is a force to reckon with on the defensive end, too. There will rarely be a time you look up and see him just standing around on defense; he is locked in, bouncing around, and jumping the passing lanes each possession. The steals he generates lead to points in transition, where he really shines. - Brianna Patton

Next in Line: Carl Parrish is a quick, playmaking guard that can get hot from three quick. I first saw him at City of Palms back in December where I watched him knock down five consecutive 3-pointers. Parrish has a solid handle which pairs well with his quickness. He has the ability to blow by defenders with his quick first step and can stop on a dime to rise up for a pull up jumper. Look for Parrish to make some noise in our upcoming events. - Brianna Patton 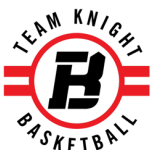 BP’s Take: This Team Knight squad has multiple athletic wings that can go get a bucket and defend. Led by the backcourt of Eduoard and Vedrine, a lot of their scoring comes from their guard play. This team likes to get up and down, and play aggressive on the defensive end with hopes of getting out in transition. I’m looking forward to watching this team play against some of the NY2LA teams in upcoming events. - Brianna Patton

Stockriser: Derrick Eduoard had a great showing at our Atlanta Jam a few weeks back where he averaged 16.5 PPG, 4 rebounds, 3 steals, and 2 assists. The 6-foot-4 wing has good positional size and the shooting touch to score from different spots on the floor. He can also play both guard spots and defend multiple positions on the ether end. - Brianna Patton

Next Up: Eduoard’s backcourt mate, Joshua Vedrine, can be a powerful force on both ends. 6-foot-4 with a strong frame, Vedrine can punish guards once he gets in the lane. He utilizes his strong upper body to attack the rim and finish through contact. When he gets a full head of steam and gets downhill, watch out. 8/10 times he is getting ready to rise up and throw it down. His physicality and motor show through his activity level on the boards. - Brianna Patton 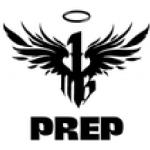 JY’s Take: They made their HoopSeen debut on the grandest of stages at the Grassroots Showcase and didn’t disappoint. Thanks to viral hooper Mikey Williams, the crowds came out and so did the TikTok reels. Take away the pomp and circumstance that comes with all of that, we saw some good things from the Charlotte-based indy squad. The backcourt anchored by the upside of a guy like Jordan Butler really stood out to the basketball purists. There is some high-level talent here and it seems like the group is starting to find it’s stride. With playmakers and slashers on the roster, this is a team who can and should do some major work in the months ahead at events like Bob Gibbons and the Best of the South. - Justin Young

Stockriser: If you’ve paid close attention to travel basketball this spring you got the feeling that Derin Saran, Turkish PG from Asheville School, was trending upward. He is a smart ball-handler and decision-maker as the pilot of this talented team. Talented mid-major programs are taking notice and offering him scholarships right now, a rare thing for the majority of the class of 2023 prospects. Saran has good size, good smarts and good momentum going into the summer.

Next Up: Is it possible to be a nationally recognized prospect but also be considered Next Up? For Jordan Butler, it may be the case. He never fully unleashed his high potential at the Grassroots Showcase because the ball sometimes got stuck in the highlight machine. When he did have his moments, you saw why so many people are so high on the 6-foot-11 forward. He’s primed for a signature event and don’t be surprised if that comes in the coming months. 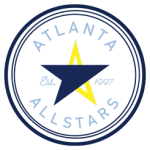 JY’s take: The balance of talent here is worth noting for the All-Stars. They are skilled an big inside. They have a nice balance of playmakers, passers and shooters on the perimeter. The wings add a perfect symmetry to the lineup. In typical All-Stars fashion, you never know where you’re going to get production from in any given game. That’s the beauty of their squad. For me, the rotation of big men make it hard for travel teams to contend with. As the game slows down, the All-Stars know how to fortify thier strengths and hold strong in the paint on both sides of the court. That has allowed them to have such a strong start to the travel season and rank so high in our first power ratings of the HoopSeen Association. - Justin Young

Stockriser: Brigham Rogers. The 6-foot-9 forward is part of the impressive group of versatile bigs that this Allstars team deploys. Rogers was among the best of the best at the Grassroots Showcase in Louisville this past weekend. His vast skillset was on display, and he walked away with offers from Toledo and Lipscomb. By summer’s end, his star will have risen higher and his list of college suitors will grow to be even more expansive. - Josh Tec

Next in Line: Brandon Rechsteiner has broken out, the big guys—Brigham Rogers, Spencer Elliott and Dylan Faulkner—have seen upticks in their recruitments. Who’s next? I have to tab Mason Etter as the next Allstar to take off. The 6-foot-5 guard has the tools. He’s a smart player that shoots the ball well from all over the floor. Etter is a quiet killer. He goes out there, takes care of business, and before you know it, he’s hung double-digits on the board. - Josh Tec 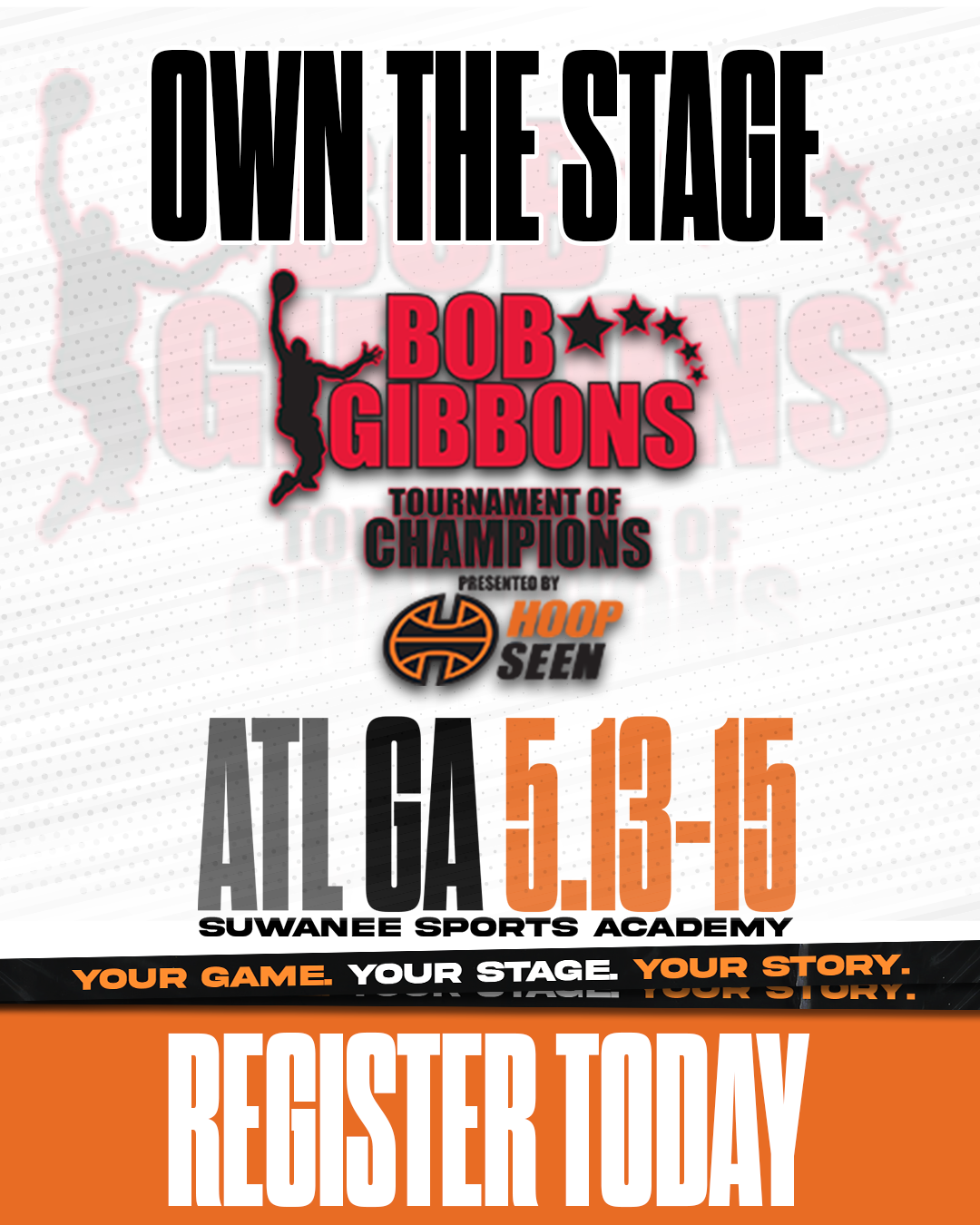