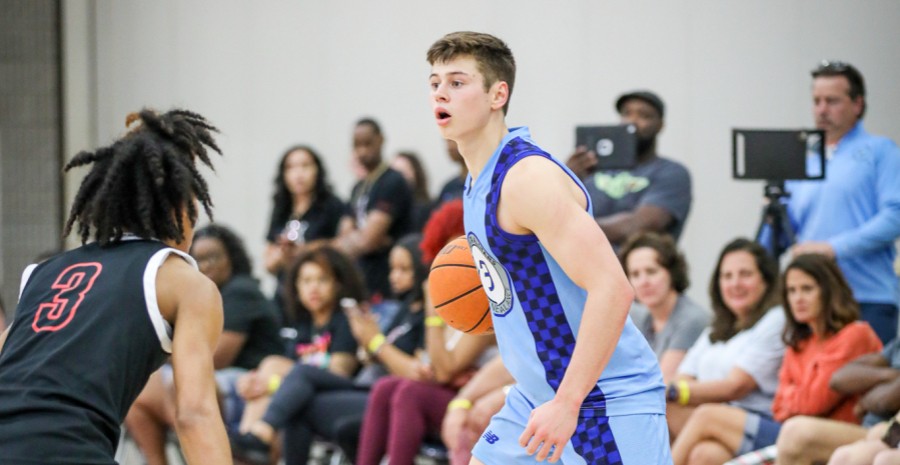 Day two in the books, and man was it fun! We had a full day of hoops from 8:00am to 9:00pm and I got the chance to see a lot of players and teams. Take a look at my takeaways from the action packed day.

The Atlanta Allstars 16U squad made an incredible come back this morning. When I walked away for a bathroom break, they were down nearly 15. When I came back, they were up three and ultimately won the game by nine. I was shocked. I had to ask a few people around if I was reading the score correctly because I could have sworn they were just down by double digits. It reminded me of the Grizzlies quick come back against the Timberwolves the other night. This team just continues to show how well coached and balanced they are as a unit. Jax Abernathy continues to have a good spring as he led the way with 20 points. 19 of those came in the second half. Liam Mullins added 17.

Brandon Rechsteiner Locks in From Deep

Whew. Brandon Rechsteiner of the Atlanta Allstars had the single best shooting performance that I have seen this travel season. The 6-foot-1 guard knocked down 8 triples for a game high 24 points. He was money from three in the first half, knocking down four straight. Rechsteiner has a smooth, fluid stroke and does a good job of staying balanced. Coaches on the baseline were murmuring about his shooting throughout the game.

Brandon Rechsteiner (@b_roc0) is shooting lights out from deep. I’m talking catch and shoot, off the dribble. It’s been automatic @AtlAllstars2023 pic.twitter.com/7J8Cg9TjNf

Just like last year, 3D Empire has a really solid 16U group. Sophomore Kuol Atak has been one of the best players in attendance. At 6-foot-8, he has good length and looks likely to grow some more. He has a silky jumper from the perimeter, can create off the bounce, and score it in the paint with ease due to his size. Atak had a 25 and 24-point performance today in two big wins for his team.

I was also impressed with the PG Niko Lucero. He is a floor general that does a good job of controlling the pace. He can get to his spots and score it with a soft touched pull up as well as penetrate the lane and dish it out to open shooters around the perimeter.

The Big Man is Still in Style

Owen Freeman of Mid Pro Academy is easily the best forward at the event. The Iowa commit has been a walking double-double and has gotten even stronger since last travel season. His footwork paired with his patience and soft touch around the rim have proved to make him near unguardable once he gets the ball in the low post. The way he attacks the offensive glass resulted in quite a few highlight put back slams, too. In a world where the guard position is king, it is always pleasant to see a kid go to work down low.

Florida Pro had a big win against a good 3D Empire team in their second game of the day. De’Shayne Montgomery put a lot of people on notice with his athleticism. He threw down some powerful dunks from the start and continued to make some big, high-flying plays on his way to 22 points. Jaiden Miller was steady throughout the game; he took care of the ball and made some timely plays driving to the lane. This was a great win for Florida Pro.

Gain Elite came out with a ton of energy in their match up against Mikey Williams and 1 of 1. They took an early, commanding lead and never lost it. The trio of Nasir Whitlock, CJ Ohara, and JJ Ware played extremely well combining for 65 points and nine threes. Whitlock has been one of my favorite guards I've seen due to his ability to control the pace, get his teammates involved, and knock down big time shots.