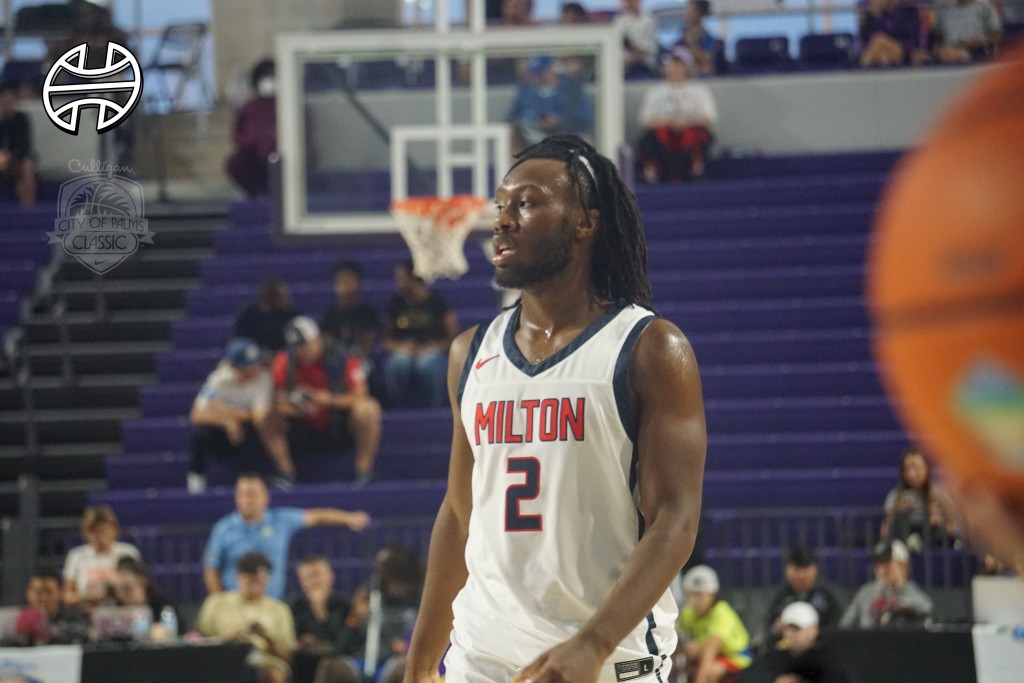 Known as one of the top scholastic events in the country, The City of Palms is back this year with a terrific slate of teams and matchups. Monday, especially, provided a ton of high caliber matchups and will only get better as bracket play continues. Here are my takeaways from Day 4.

In a basketball world where the majority of kids now grow up wanting to be guards and guard play is all that you seen on highlights, watching good big men play is always refreshing. It got started in the first time slot with Dr. Phillip's Ernest Udeh Jr. The Kansas signee plays with such a high motor, especially when it comes to running the floor and rebounding. His activity level on the boards is just ridiculous. The nightcap featured one of the top centers in the country in Oregon signee Kelel Ware. The 7-footer made some flat out ridiculous plays that 7-footers should not be able to make. He finished with a game high 22 points against IMG. Not to be outdone, IMG's front court of Jarace Walker and Eric Dailey Jr. may have been the best duo on the day. Walker is just a physical specimen with a ton of skill. He is going to make an immediate impact at Houston. Dailey had one of his best games of the season. He knocked down some shots from outside and converted on tough shots in the paint through contact. The front court of Brenen Lorient and Taylor Hendricks was also fun to watch for Calvary Christian. They are both versatile players that can be effective inside-out. They run the floor well and create mismatch problems. Both FAU and UCF are getting steals with these two.

A few years down the line, I think we'll all look back and realize just how deep and special this point guard group of the class of 2022 really was. Many of those top guards played today. Milton's Bruce Thornton had the best day of all the PGs. He is not the fastest or most explosive guard, but he is so tactical with the way he maneuvers around the court. Thornton is a stout, physical guard that will fit in perfectly in the Ohio State system. Jalen Hood-Schifino had a solid game with Mike Woodson and staff in attendance. The Indiana signee plays under control and never tries to do too much. He is just the type of floor general that a team full of star power like Montverde needs. Arkansas commit Nick Smith went head to head with Alabama signee Jaden Bradley. Both lead guards showed their ability to control the pace, get to their spots quick, distribute, and score it from any spot on the floor. We'll be watching those two battling it out in the SEC next year.

The nets were on fire throughout the day as it seemed that just about every game a player got hot from three. It started in the first game where Denzel Aberdeen shot 85% from behind the arc. He knocked down six triples, only missing one. Not to be out done in the following game, Miami Norland's Carl Parrish came out firing in the third quarter where he drained four 3-pointers. He finished the game with five. His teammate Tristian Wilson added four threes of his own. In the third game of the day, it was Eddrin Bronson's turn. The Tampa Catholic guard started off the game hot, knocking down three 3-pointers in the first quarter. He finished with four total. Milton's Chase Cormier led his team's comeback with three of his own in the second quarter. Both him and Bruce Thornton had three triples a piece. The threes just kept on coming. In the next game, Duke signee Dariq Whitehead knocked down five and sophomore K.J. Evans hit four.

Both Life Christian and Milton got a big win today. Life Christian started the game behind on a 11-0 run from Tampa Catholic. Each time they would claw their way back, Tampa Catholic would go on another run, but they always remained close. Midway through the third quarter was when the tide changed. The trio of Angel Montas, Hansel Emmanuel, and Breylin Garcia made all of the difference. Montas had one of the top performances of the day, going for 30 points including the go ahead bucket to win the Sunrise Series Championship. Emmanuel's story alone shows how resilient he is. It is truly amazing to watch this kid do the things he does on the court with just one arm. He had a great game today. He proved that he is an elite shot blocker and an underrated passer. Both he and Garcia finished with 16 points. Garcia was the glue guy for Life Christian; without him, they do not win the game. His physicality in the second half was too much for Tampa Catholic.

Life Christian completes the comeback, Angel Montas gets the tip to go after multiple efforts. He was a beast in the 2nd half to finish with 30. Hansel Enmanuel had 16-12-8. Eddrin Bronson with 23 for TC.@soh_elite pic.twitter.com/kulxmu67z0

Milton came into this season regarded as one of the top public schools in the country. Most of the basketball world knows of the unfortunate hand they were dealt just last month. I can imagine how tough these circumstances were for the players and staff to deal with. A lot of people were doubting them after they took a loss to Pebblebrook recently. They were able to put a halt to a lot of the whispers today with their win over Calvary Christian where they came in as the underdogs. Calvary got off to a quick start and it looked like they were going to run away with it earlier. However, three triples from Chase Cormier settled the Eagles in. In the second half, Thornton really got going. It turned out, a heavy dose of him was just what Milton needed to hold on to win the game. He finished with a game high 22 points and Cormier added 19. While Kanaan Carlyle did not have the high scoring game that we have grown accustomed to see from him, he impacted the game heavily on the defensive end.

The backcourt of Denzel Aberdeen and Riley Kugel is arguably one of the best in the country. In fact, both of these guys have a really solid chance at being viewed as two of the biggest steals in the 2022 class. Aberdeen had a great showing in the first game of the day against Charlotte High School. The Florida signee finished with a game high 24 points and showed just how good of a shooter he can be, going 6/7 from three. Kugel also played well, scoring it from all over the court. The Mississippi State signee knocked down threes, mid range jumpers, and converted on some acrobatic lay ups and powerful slams. Both players are great athletes that are dangerous in the open floor. Do not be surprised to see these two making some noise in the SEC next season.

The underclassmen really held their own in some high level matchups today. The second game of the day featured a matchup between two of the top 2024 prospects in Florida - Asa Newell and Marcus Allen. At 6-foot-9, Newell has so much upside. The lefty can play inside-out and has the tools to be an elite rebounder and rim protector. He already has multiple high major offers. Allen may have been the most active player that I saw today outside of Jarace Walker. He is a two-way player that can score from anywhere and defend multiple positions. Karter Knox, younger brother of New York Knicks guard Kevin Knox, is going to be really, really good. The 6-foot-5 wing has great positional size with a strong frame. He embraces the physicality of the game and knows how to exploit weaknesses in the defense. While Derik Queen of Montverde may not wow you on the stat sheet because of the talent on his team, you can see flashes of what he can do. I saw him at the NBPA Top 100 Camp back in July where he was the only kid in the 2024 class that got an invite. He has a big, strong frame that he utilizes to play bully ball. He also moves really well for his size. He will take on a much bigger role for Montverde when their stellar class of 2022 graduates. I also really liked Isaiah Campbell-Finch of Tampa Catholic. Only a freshman, he plays with a ton of poise as the starting PG. He plays at a good tempo and has a good feel for the game.

Other Notes and Tidbits