Border League: The stars came out to play in Vegas 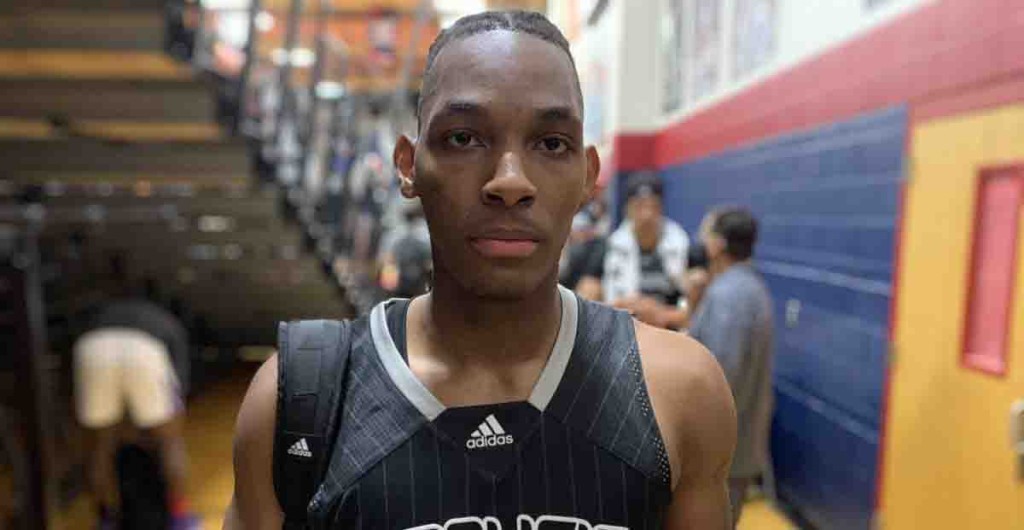 Border League: The stars came out to play in Vegas

HENDERSON, NV - The first night of the annual Border League brought us to Coronado High School for the Top Flight Division and the star power set the bar incredibly high.

Jared McCain, Corona Centennial (CA): You’ll be hard-pressed to see a guard with a better takeover skill quite like McCain has. He’s one of the true elite guards in the class of 2023 nationally. His approach is professional and it seems to keep only getting better. He’s a no-brainer five-star guard (top 25) in the class and when its all said and done he and his old teammate Kylan Boswell may contend for the top overall spot for the guard position - whether it is PG, SG or CG. Not sure that matters. McCain has such control and an elite shot-making ability that is hard to find much better than him. He’s pure fun when you watch him. McCain has absolute college star potential. What a player he is.

Shaedon Sharpe, Dream City Christian (AZ): As our No. 1 player in the class of 2022, the notion of playing to expectation is a heavy crown to wear and in his first real showing on a major stage this scholastic season, all eyes were on the high flyer from Canada. What was in his bag in the opening round of the talent-rich Top Flight division of the Border League? Well, a whole lot of what we’ve come to expect from the most unique athlete in amateur basketball. Sharpe fly in the air like a Vegas showman for dunks, blocks and rebounds. He’s quite something when he leaves the floor. There’s no doubt about that. What’s interesting about his game is his effortlessness in delivery and the smoothness in his shot. He was effective from three in his team’s win over Vertical Academy on Friday night and gave the crowd something to pull their phones out for. There are flashes of Gerald Green in his game. For a point of reference, Green was our No. 1 player in prep hoops 15 years ago before his long NBA career. Sharpe reminds me so much of Green at the same stage.

MJ Rice, Prolific Prep (CA): The North Carolina native has moved across the country and brought his “hey, good luck trying to stop me” attitude with him. The West Coast doesn’t have too many bully ball superstars in on the prep scene and what Rice does is not easy for teams to contend with. He just dominates his defenders with a relentless pursuit of basketball right hooks, jabs and body blows. The future Kansas wing was one of the true studs on opening night. Prolific Prep has a roster that’s pretty balanced and Rice is right in the middle of it. He’s primed for a monster season with the from Napa, California.

Caleb Foster, Oak Hill Academy (VA): There is a control to the way Duke bound guard plays that is easy to see. His controls of the game keeps him in line with the action of the game. He’s never rushed and plays like a man who knows what he is doing at all times. In the game against Bishop Gorman, it was pretty clear that Foster was the most talented player on the floor and he’ll probably be the best instant impact guy in college of the guys on this Oak Hill team this season. What a player to build with at Duke for coach Jon Scheyer. Foster has the traits of the guards who have shined at Cameron indoor Stadium over the years.

Devin Williams, Corona Centennial (CA): The long and lean big man has always been a high celling prospect and you’ll see a flash here and there that makes you wonder of he has the same kind of uptick we saw from a guy like Jaxon Hayes not too long ago. Now, they are different players but the quick ascent is certainly similar potentially for Williams. He’s an aggressive shot-blocker with the ability to step out and hit a three. Interesting long term guy to chart.

Keenan Bey, Bishop Gorman (NV): It wouldn’t come as a big surprise to see Bey develop into one of the most interesting players on the West Coast from the class of 2023 moving ahead. Defensively, he can guard multiple spots and make his opposing players think through their delivery because of his length. You’ll catch a glimpse of really good things here and there from him and the good moments are starting to stack up. We are at the buy now stage of his prospect chart.

Isaiah Elohim, Sierra Canyon (CA): When you’re building out your list of the next wave of great California guards, the class of 2024 has to be near the top. The 6-foot-4 guard has a mature game for a young player, a toughness to match and a frame that should grow into a real problem to guard for other teenagers at the prep level. His early Pac-12 offers are justified and a pre-cursor to what should be a national recruitment.

John Mobley, Jr., Bishop Gorman (NV): The baby-faced guard is unafraid to take a big shot and confident enough to bury it from deep. Against Oak Hill, the class of 2024 seemed to always match the opposition with an equalizing bucket. He’s a high volume scorer that wanted to have the ball in his hands on the big stage in his home town and delivered when his team needed a shot. Nice start for him here at the Border League.

Back in Las Vegas at host school Coronado, PG Pop Pop Isaacs was clutch the foul line for his Air Nado squad. There isn’t a better guard in the country at drawing more fouls than Isaac. His pesky style of play entices so many fouls and he knows how to get to the line like Collin Sexton.

Oak Hill Academy’s Chris Livingston’s junkyard dog approach - scoring on putbacks, scoring on second chance opportunities and just muscling through an undersized Bishop Gorman team was a difference maker down the stretch in the best of the night. He scored on a buzzer-beater baseline out of bounds play to seal the win.

Prolific Prep big man Adem Bona is truly the Jason Vorhees of high school hoops. Like the horror movie legend, Bona haunts the paint and throws away shots like a they’ve personally insulted him. He recorded a loud half dozen shots in the opening half of his team’s win against Corona Centennial.

It is USC or the NBL in New Zealand for Prolific Prep wing Tre White. He had a really good game on opening night. The Texan has a flair for the big play at all times.

There were a handful of assistant coaches inside the gym for the Top Flight division of the event. Represented was BYU, Kansas, New Mexico and UCLA.