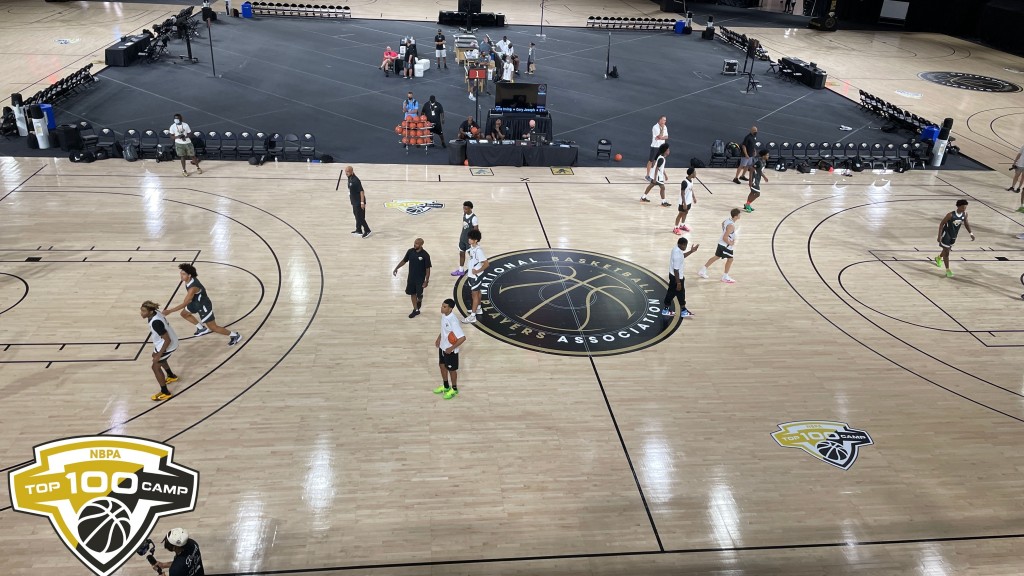 ORLANDO, FL - The NBPA Top 100 Camp brought together 60 of the top prospects in the country into one gym to go through skill work and compete. The competition was intense from start to finish and I was able to learn a lot about a number of players. Here are four main takeaways from the week.

Jaden Bradley is a Top Dog

The argument can be made that nobody had a better overall showing at the camp than Jaden Bradley. The 6-foot-3 PG out of IMG Academy stood out from start to finish, leading the camp in both PPG (15.5) and APG (5.5). He even won the MVP award. Offensively, there is not much that he cannot do. Bradley was able to score the ball in a variety of ways displaying his crafty handle and athleticism. He has a strong frame that he utilizes to absorb contact when attacking the rim. This kid is the ultimate competitor and it showed as he led his Hawks team to a championship win.

Caleb Foster has been a hot name to follow throughout the live period and he continued with that same momentum through the camp. During 3x3 play with a completely different set of rules and foundation from the traditional 5x5 setting, he showed that he was able to adjust and be effective. He stood out due to his ability to maximize his dribbles, move without the ball, and get a good look at the rim early in the 12 second shot clock. Foster was the only 2023 player to earn All Star honors and to finish in the top-10 of scoring (11.2 PPG). His knack for drawing fouls and getting to the line was evident as he led the event in FTA and FTM (17-18). The North Carolina native picked up an offer from Duke shortly after the conclusion of the camp.

Throughout the summer, I have been hearing a lot of noise surrounding the state of Texas and the quality of players that come out of there. It did not take long for me to see why there had been so much talk. For starters. of the 60 players in attendance, nine of them were from Texas. Of those nine, Cason Wallace and Keyonte George stood out to me the most. These are two high-level players that compete from start to finish. Wallace was a part of both the 3x3 and 5x5 championship games. At 6-foot-4, his ability to defend paired with his defensive potential sets him apart from others in his class. Leading the camp in steals per game with three, he showed that he is one of the top, if not the top, two-way guard in his class. While an injury kept George out from some of the game play, his performance in the first game on Wednesday and on the games on playoff Friday showed why he is regarded as a top scorer in the country. He finished with 18 points in the championship game while leading his team to a win.

In today's basketball world of fast-paced guard play and a lot of 3-point shooting, it is refreshing to see highly skilled big men go to work. The skill level of the centers at this camp was incredible to take in. Donovan Clingan, Adem Bona, and Vincent Iwuchukwu stood out the most. All three of these players were featured in the championship game. While Bona and Iwuchukwu got came out on top, Clingan definitely made his case for a rise in rankings. The UCONN commit is a true 7-footer with a ton of skill. He has soft hands, a number of moves on the low block, and he is really mobile for his size. He finished second in RPG with seven. Bona was the most athletic big man in attendance. The way he glides down the floor is a sight to see. He threw down a number of powerful dunks and flew in for multiple emphatic blocks on the defensive end. Iwuchukwu was arguably the top overall center of the camp. He excelled in both 3x3 and 5x5 game play, as he led the camp in FGP converting on 27 of his 36 shots attempted. Like Bona, he runs the floor really well and gets rewarded with easy buckets in transition. Both Bona and Iwuchukwu were a large part of the Hawks championship run; they were the best frontcourt at the camp.