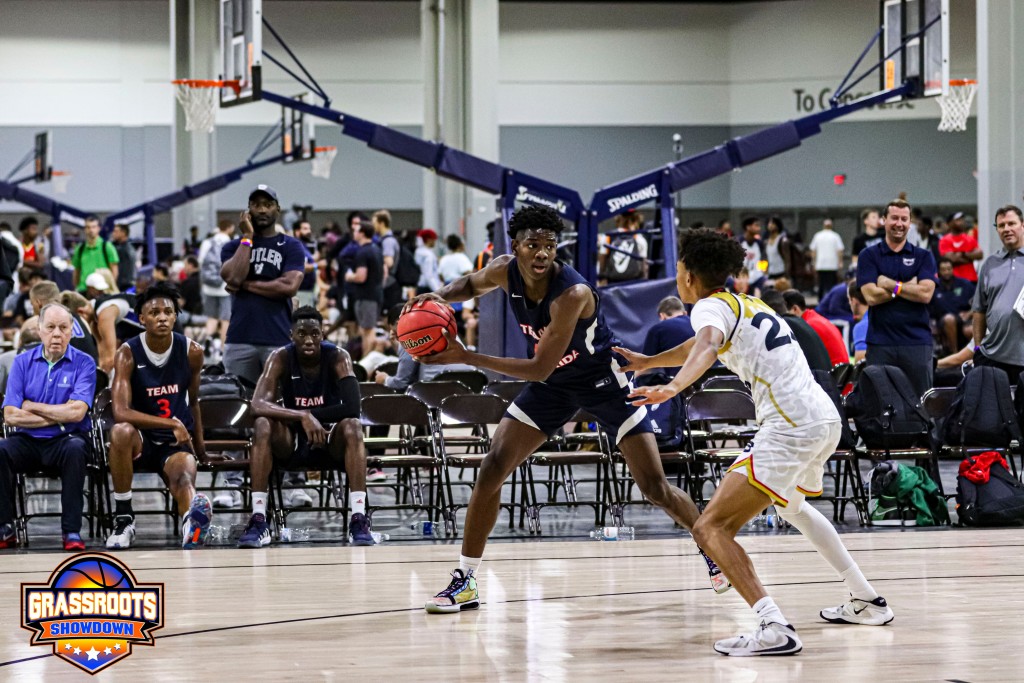 Day one of the Grassroots Showcase in Louisville, KY was really fun. There was a lot of coaches on the sidelines and a lot of good competition throughout the day. Here are my main takeaways from the first day of action.

The 2023 trio of Dawson Barr, Jalon Cole, and Kevins Charles continue to play well this travel season. When I first watched them last season, I knew they would get even better, and that is exactly what has happened. All three players have a different type of game, but they mess extremely well together. They are all capable of scoring 15+ a game. Barr is the shot maker out of this group. He can score it from anywhere on the floor and is an exceptional shooter from three. Cole is an athletic guard that can easily break down defenders to penetrate the lane. Charles is the most physical of the three. He does a lot of the dirty work and bangs down low.

Team Florida picked up a big win over Anthony Black and 3D Empire. This is a small team in numbers, but each player produces every game which makes them difficult to beat. Brenen Lorient, Prince Mosengo, and Lassina Junior are long, athletic, and make an immediate impact on both sides of the floor. Lorient had a really good showing today, especially in their second game. He led with 20 points and had a number of emphatic blocks. Needing a stop to seal the game, he sent a shot to the next court to end the game. Geoffrey Sprouse also had a nice second game, finishing with 15 points. He hit a lot of big shots down the stretch, including the go ahead bucket.

Anthony Black of 3D Empire is just one of those guys that scores the ball effortlessly. Whether he is breaking down a defender to create space, attacking the rim, or knocking down a jump shot, it all seems to come so easy to him. He scored 26 points in a big OT win in his second game. I would like to see him assert himself on the offensive end earlier on in the game because this kid has the capability of completely taking over a game. It is easy to see why programs like Gonzaga and Duke are after him.

Nasir Whitlock hit a “Dame-esque” 3-pointer at the buzzer to beat the Tennessee Tigers. The 2023 guard made a big statement playing up last weekend at BOTS. He continued that momentum today with his performance against the Tigers. Whitlock plays with a lot of confidence and will continue to get better.

I watched this team twice today and walked away impressed both times. I really like what Cole Farrell brings to the table for this team. He is a shifty guard that breaks down defenders with ease. He likely drew more fouls than any other play today due to defenders not being able to stay in front of him. 7-footer David Craig has shown a big improvement since the last time I saw him. He moves around better and has added a few moves on the low block. Craig played with a lot of patience inside today and displayed his good hands.