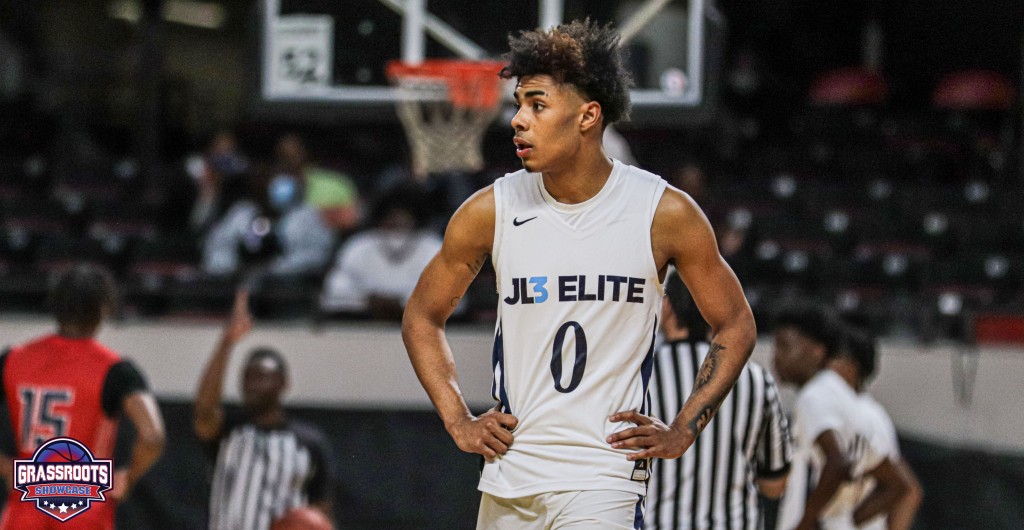 LOUISVILLE, KY - Opening day of the Grassroots Showcase was a great start to what should be a big-time weekend. As we get things started up here on the travel basketball stage, some of the heavy-hitters went to work at the historic Freedom Hall.

Ask around that was posted up inside Freedom Hall and they’ll probably tell you that Vince Iwuchukwu was the most impressive post player on opening night. The big man for JL3 was the hardest guy to contain in the four-game slots at Freedom Hall. His sheer size and presence were too hard to contain. The 6-foot-10 center lived up to his lofty status with a parade of power and blocked shots. When the ball was tossed above the rim, he went to the top of square to catch it and throw it done. Iwuchukwu is in hot pursuit by the heavy-hitters. Baylor, Kansas, Texas, Purdue and TCU are in the mix.

Upon first glance at the Mean Streets EYBL team, big man Jalen Washington made it pretty clear that he was in Louisville with a purpose in mind - to eat up the competition. Washington was a paint warrior and his efficiency was outstanding once he set his feet and went to work around the rim. The big man was outstanding from tip to finish. When you’re consisted a top 25 player in the country, the expectation to deliver and produce comes with every game you suit up for. For Washington, he delivered in a win here on opening night.

The JL3 squad from Houston came out of the gate with purpose and power. From start to finish, the Lone Star studs didn’t take their foot off the gas. That certainly rang true for class of 2023 stud Chris Johnson. The 6-foot-4 is a high-flying, high-energy, high-potential guard who checks a lot of the boxes of a high-major wing. On Friday night, he was the best underclassmen in the gym at Freedom Hall on opening night. As we move forward in the weekend, he’ll probably stay pretty high on our list of top dogs from the underclassmen grades from the weekend.

If there was a sleeper, if you want to call it that, it had to be Jamil Muttilib. The 6-foot-4 Texan showed a keen ability to run the pick and roll and absolute explode to the rim for a score with speed. When the space opened up, he was looking to hit the pull-up jumper. Defensively, Muttilib was active with his hands and confident enough to get down into his man and play aggressively when someone matched up with him. Put his name down as a combo guard that should compete on the teams from the Lone Star State that we saw do work in March.

Illinois Wolves guard Jaden Schutt had a heck of a showing in the evening game. We saw flashes of why the likes of Illinois, Iowa, Michigan State, Nebraska, Ohio State, Minnesota and Creighton have all offered.

Big man Braden Huff was efficiently effective for his talented Illinois Wolves club on Friday night. The big man Is one of the most sought after posts in the class of 2022 from the Midwest. He’s in hot pursuit by the likes of Creighton, Virginia Tech, Northwestern, Wisconsin and DePaul.

JH1 from Wisconsin is a program that can and will beat a lot of shoe-sponsored teams this travel season. They are skilled, smart and execute with precision. And they’re anchored by a talented forward in Leon Bond. The 6-foot-5 wing from Milwaukee said he's been offered by Marquette, Eastern Michigan, Virginia Tech, St. Thomas and Western Illinois.

Phenom University point guard Seth Trimble has all of the control and poise you want to see from your floor general. The 6-foot-3 guard has such a grasp of the game with patience and maturity. It’s easy to see why the Menomonee Falls, WI guard is in such high demand from programs from across the country.

I maintain this thought every time I see him play - RJ Godfrey is one of the most versatile players in the nation from the class of 2022. The 6-foot-7 forward from the Atlanta Xpress will be such a valuable interchangeable player at the college level.

The Louisville Legends have an unsigned senior that could, and should, drum up some interest from the Division II programs that are in the building this weekend. Tae Dozier is a long wing with skill and a considerable amount of upside. He’s a young senior and could be a great option for a post-grad situation next season.