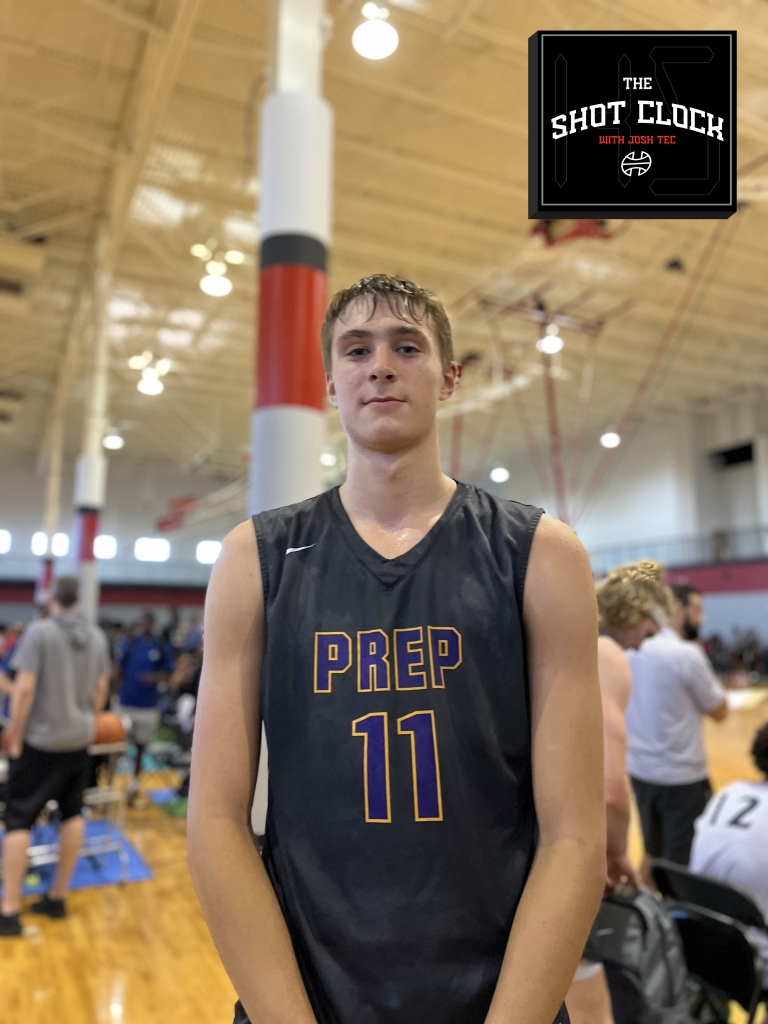 Happy Monday! It’s October, and I’m writing this from Florida with love.

If you know me, you’d know that I’m an honorary Floridian. I’ve put on for the Sunshine State for as long as I can remember, and it has done the same for me.

From Broward to Duval, I love this place, so getting the opportunity to come down for Hoop Exchange’s Fall Festival was a no-brainer.

That’s where the focus of this week’s edition of The Shot Clock will be focused. Think of it as a posthumous recap of the weekend.

Cooper Flagg makes his case for No. 1

There’s going to be a lot of talk about the No. 1 spot in the 2025 class for the next couple of years. I’ve probably already written about it multiple times by now.

At the Fall Festival this weekend, Cooper Flagg made his case as the class’ best player with Montverde.

It’s Flagg’s approach to the game and relentless pursuit of the ball that set him apart more than anything else.

While one of the younger guys on the team, it’s clear that Flagg has stepped into a leadership role early on at Montverde. During a slow start, it was Flagg who was delivering the messages to fire his team up. Aside from being a vocal leader, he also set an example with his play. Flagg kept the ball moving and never let it stick, and he brought a high-motor approach on both ends of the floor.

Whether on the glass or on defense, Flagg has a nose for the ball and goes after it aggressively, which led to several offensive rebounds, highlight-reel putbacks, steals, deflections, and blocks.

He processed the game at a level higher than most and paired his feel with a motor that’s always running hot.

Sure, his athleticism, his ability to stretch the floor, and all of the other things he brings to the floor certainly don’t hurt either. This guy has all of the screws in place already. It will only be a matter of tightening them up over the next couple of years.

Cameron should be going crazy for Sean Stewart

Sean Stewart is my kind of player, and Duke fans should be overjoyed to have him coming in with their comically-loaded 2023 class.

Over the weekend, Stewart played the hits for Montverde and did what he does best. He brought his dirty-work mentality and everything for the Eagles. He’s a low-maintenance guy who doesn’t need things run for him to be impactful. He just goes out and makes plays happen.

Whether rebounding, blocking shots, or trying to tear the rim off its hinges, Stewart plays an aggressive, dominant style of basketball. He uses his physicality and athleticism to bully people.

While it’s a gritty play style overall, Stewart blends plenty of finesse and flair in as well. He can step away from the basket and let his skill do the talking, and he can fill highlight reels with his athletic, above-the-rim attack.

One more from the Montverde world, Derik Queen had his moments all weekend, but in Montverde’s first game on Sunday, he was at his best.

Queen was essentially unstoppable inside the arch. He has great feet and a deep bag of post moves and counters. Watching him methodically attack with the ball in his hands was special.

Queen’s post moves are to be marveled at for certain, but he also stepped out and hit from outside of the arch too.

Westminster Academy down in South Florida has a squad on its hands, and they took care of business over the weekend.

Starting in the middle of it all, Jaylen Carey gave the Lions a physical, commanding post presence that nobody had an answer for. On both ends of the floor, Carey owned the paint, and he showed that his impact can stretch out to mid-range, where he comfortably knocked down several jumpers. He’s already much improved from when I last saw him in May.

2025 wing Dwayne Wimbley has added some strength to his frame and uses it well with his athleticism. Flying in from the perimeter, Wimbley gave Westminster a secondary board man to pair well with Carey. He used his leaping ability for thunderous put-back dunks and used his strength to be able to play through contact on drives.

Another 2025, Alex Lloyd is an explosive guard with the ability to fill it up in a hurry. He creates separation well and can get to his spots with ease. Lloyd had a big weekend inside The Big House. The 6-foot-4, lengthy guard has a high ceiling and will be making plenty more noise over the next couple of years.

In the 2026 class, Alex Constanza was one of the most high-upside guys in the building. At around 6-foot-8, Constanza is a long, mobile wing who took on some of the offensive initiation duties and showed off plenty of athleticism. He’s a versatile weapon on this Westminster squad, and he’ll be in the national conversation as one of the upper-echelon players in his class when the time comes.

Look out for Dante Allen

Riviera Prep’s Dante Allen was one of the weekend’s standouts. Even in a game against Montverde, Allen commanded attention and welcomed the challenge.

A bigger, strong guard, Allen was explosive while playing with poise and pace, and he has a great overall feel for the game. He knows how to play.

On Saturday night, it was Allen’s high-octane scoring that generated buzz. He used his athleticism to blow by defenders and his strength to finish through others at the rim.

Sunday morning saw him pitted against Montverde. In this one, it was his pace, I.Q., and ability to create for others that stood out. Not overwhelmed by the moment, Allen was able to probe the Eagles’ defense and dish out nifty passes to get his guys open looks.

One of the games of the weekend saw Tampa Catholic pitted against Oak Ridge. Prospects on each side showed out on the big stage.

In a win, Tyler Johnson was the guy for Oak Ridge. The 6-foot-5 wing was a force and led Oak Ridge with his athletic attack of the basket. Johnson was automatic around the rim. He was a key piece in their pressure defense as well.

Karter Knox led the way for Tampa Catholic. He’s a total game-changer. Knox does everything on the floor. In this matchup, he started out hot from the 3-point line, but he moved on to pressuring the defense with his pursuit of the rim. Knox blocked multiple shots on defense and made his mark on the glass too.

Recent Georgia commit Dylan James had a solid weekend with Winter Haven. The 6-foot-8, athletic forward used his physical gifts to finish above the rim and serve as a lob threat throughout the weekend. James also showed off some of his shooting range with some made 3-pointers. UGA hoops fans have a lot to look forward to in James.

Tahir Bond and Ramez Zayed both had nice moments in the Coral Glades backcourt. Bond brings a punch of speed and bounce with great vision and passing. Zayed doesn’t have as much flash to his game, but he produces regardless. He stood out with his ability to get to the rim and finish consistently. Elsewhere on this squad, forward Dylan Burrowes was also outstanding for the Jaguars. He controlled the glass and thrived around the basket. Burrowes was a consistent double-double threat.

The Villages has a budding star on their hands in Chris Washington. He’s a 6-foot-7 freshman who’s all arms and legs right now. Long and lanky, Washington has a projectable frame to add strength to, and he still might have some growing left to do. He’s a mobile forward who showed flashes as a slasher and a perimeter-oriented player. Washington has a long way to go, but he has the foundation of a superstar. Keep an eye on him in 2026.

We’ve already seen quality middle schoolers at the NextGen camp, we’ve seen some of Alabama’s best, and we’re looking forward to continuing the action with our Elite Preview which is an invite-only event for underclassmen. That’s on October 9. You can sign up for the waiting list via the link below.

During this travel season, I remember seeing many players I had only previously seen at our camps in the fall. An impression can be made at any time, and it can last quite some time. If you feel like you may be undervalued, there’s no better way to prove it than coming out and playing well at a camp.