The Shot Clock with Josh Tec: The Commitment Edition 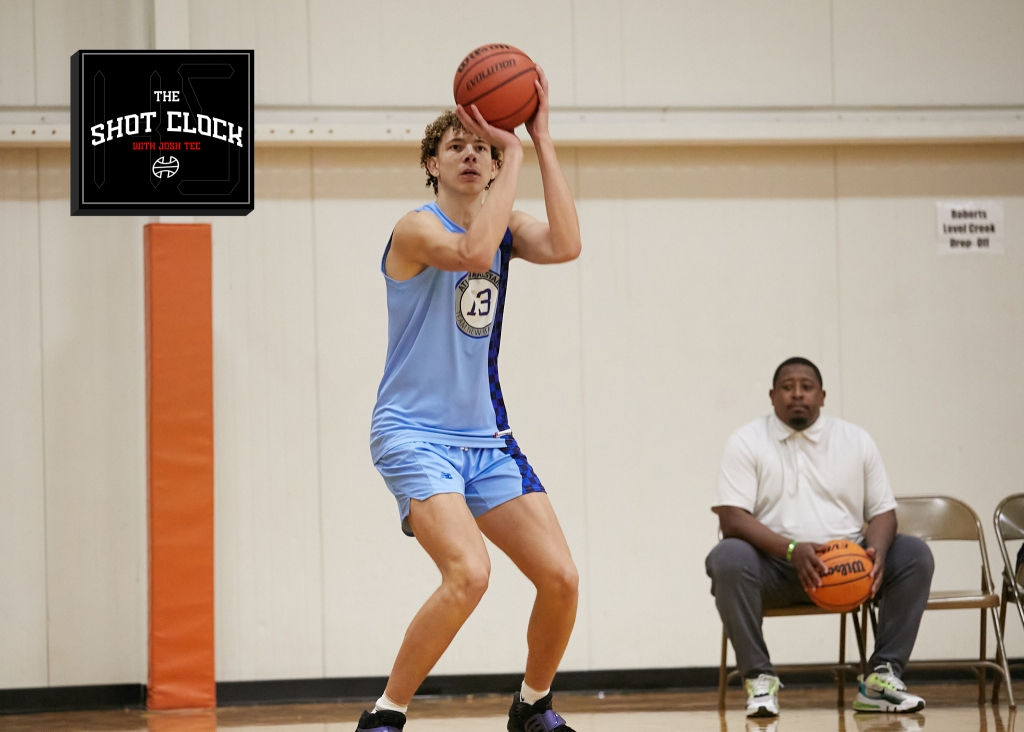 The Shot Clock with Josh Tec: The Commitment Edition

It’s remarkable how basketball is truly a year-round sport now. As soon as the travel season wrapped up, camps started around the country. I guess that means that it’s time to get back in the gym!

Before camp season hits its full stride, there’s still some downtime for most players out there which means that there isn’t a ton of new information to soak in terms of on-court developments or evaluation.

What is happening right now, however, is that players are committing left and right which is leaving a dwindling amount of the upper crust of the 2023 class available. The bulk of this week’s edition of The Shot Clock will be spent taking a look at some of the most recent commitments and eyeballing some left on the horizon.

As always, I’ll take a Georgia-centric look at things while mixing in a few more national happenings as well.

Commitment season is in full force. It feels like players aren’t wasting much time and making their college decisions as soon as possible. I love it. In this recruiting climate, if the fit feels right, there’s no need to wait around. That said, let’s look at some of the week’s commitments.

Noah Melson and Spencer Elliott make the fourth and fifth Atlanta Allstars from the 2023 class to commit to D1 programs. Melson is off to Chattanooga, and Elliott will be playing for Tulane. Both prospects will bring two-way versatility to their respective programs. Getting a guy like Melson is a great way for the new staff at Chattanooga to start things off. He’s got plenty of upside and has a chance to usher in a successful new era for the Mocs. As far as Elliott and the Green Wave go, Ron Hunter is getting a frontcourt piece with tremendous potential.

Eagle’s Landing (GA) HS guard David Thomas has announced that he will be continuing his basketball career at Mercer. Thomas has already spent some time in Macon, as he has led Eagle’s Landing there in back-to-back years for GHSA state championship games. As tends to be the case with guards from the southside of Atlanta, Thomas plays with admirable toughness and physicality. He’s capable of getting scorching hot from the field and pouring in points. Behind Thomas, Eagle’s Landing will be one of the favorites to get back to Macon to play for the 5A championship in March. If they make it for the third year in a row, Mercer fans will have a short trip to the Macon Centerplex to watch the Eagles and their future guard.

Sticking with tough Georgia guards, Tri-Cities (GA) HS guard Kory Mincy will be going to Presbyterian. Mincy’s going to bring tenacious defense to Clinton, South Carolina. As one of the better defensive guards in Georgia, Mincy’s immediately going to be able to make an impact on that end of the floor. He can also take a game over on offense. Mincy is at his best when getting into the paint and finishing at the rim or feeding open teammates. Like Thomas, Mincy is going to be the leader of a team that will be among the favorites in a tough 5A classification during the high school season.

As always, I like to venture outside of the Peach State when I can. This week, let’s head to Texas where 3D Empire’s Gehrig Normand made his decision to join Indiana’s Xavier Booker and Illinois’ Jeremy Fears as part of Michigan State’s loaded recruiting class. Normand fits in with this group as an athletic, off-ball perimeter player. While Fears will be running the point, Normand can serve as a secondary ball handler and a shooting threat for the Spartans. This Michigan State class has two guards and a versatile forward. Tom Izzo and company have built a class with great roster balance and might not be done adding pieces either.

Commitments to watch for

The 2023 class has moved quickly when announcing their college commitments. In regards to Georgia, most of the top players have already made their future homes known, but there are some who are still on the board.

The top dog in Georgia’s 2023 class—and one of the top prospects nationally for that matter—Isaiah Collier is still uncommitted. The top 2023 point guard in the country has amassed plenty of suitors and accolades even despite nursing an injury that has sidelined him for most of the summer. Collier announced a top four of UCLA, USC, Cincinnati and Michigan. He’s taken visits to each school, and his most recent was to Juwan Howard and the Wolverines. Until he makes his decision, Collier’s recruitment will be among the nation’s most followed.

Collier’s running mate at both TSF and Wheeler, Arrinten Page, is Georgia’s top uncommitted player other than Collier, and he’s the top forward prospect in the state’s 2023 class. Page’s recruiting blew up after a productive summer with TSF. He picked up several high major offers from schools like UCLA, Indiana, Alabama, Missouri, Miami (FL), Cincinnati, Georgia, USC and more. What’s interesting to note here is that three of the schools that have offered Page are on Collier’s final four as well. The pair could very well be teaming up again at UCLA, USC, or Cincinnati. Another team to eye is Indiana. Page recently visited Bloomington, and they were among the first teams to offer him early in the spring.

Another name to keep an eye on is Grovetown’s Frankquon Sherman. He’s one of Georgia’s top uncommitted players. After helping the Warriors secure a state championship, Sherman picked up his first D1 offer in June, and that was the crack that broke the dam as more started to flow in as the summer progressed. Currently, Sherman holds offers from Kennesaw State, Stetson, NC A&T, Radford, Tennessee Tech, Winthrop, UNCW, William & Mary, Buffalo and Northeastern. Sherman is a 6-foot-6 wing with a high motor. He plays with plenty of physicality on the glass and presents a double-double threat every time he takes the floor.

Jaiun Simon’s recruitment took some steps forward this summer as well. Since April, he’s picked up about a dozen new offers. Most recently, Dayton has joined the likes of VCU, Georgia State, St, Bonaventure, Wichita State and others to have extended an offer to the Pebblebrook forward. Like Sherman, Simon is a constant double-double threat with his athleticism and motor giving him an edge over opponents on the glass. A team to look for here if Georgia State. The Panthers have a few Pebblebrook guys on their roster, and they prioritized Simon during the June evaluation periods.

Familiar to the Peach State faithful, Coen Carr will be announcing his commitment on Tuesday, August 9. The springy, 6-foot-7 wing has recently received offers from NC State, UCONN, LSU, Michigan State and Tennessee after a solid summer with the Georgia Stars. Carr is coming off of visits to Michigan State and Tennessee within the last week. Through some deductive reasoning, one could assume that Carr will be choosing the Spartans or the Vols. His most recent visit was to Tennessee, so I’d venture to guess that Rocky Top will be the winner here. Tom Izzo and the Spartans are riding a recruiting hot streak, and Carr would fit in with the recruiting class they’re building in East Lansing, so if he picks MSU, that wouldn’t be a shocker either.

The recruiting landscape has shifted for certain. There’s no questioning that. How has it shifted though? What post-covid, post-new-transfer-rules trends will last? It’s probably a topic that deserves a more fleshed-out examination, but I have some preliminary thoughts floating in my head.

Recruiting transfers will take precedent in April. I don’t think that’s going to change, and it doesn’t have to be a cause for alarm. During the first April evaluation period this year, there was a little chatter about coaches not being out on the road as much and how that would impact prospects on the fringes of their respective levels. However, after that evaluation period, coaches were back out in full force.

Players seem more willing to commit to schools as early as possible rather than drag things out. The typical visit season coincides with college football. That’s when commitments come in rapid succession. This year, visits happened as soon as the travel season ended, and commitments have been flowing in with abundance. Is this unique to this class, or is it the sign of something to get used to moving forward?

With players committing earlier, a lot of the upper crust of college basketball programs are turning their attention to future classes sooner than ever.

There’s too much to dissect for this column. It’s a topic for a much larger piece in the future, but with the obvious differences between this year and previous ones, I wanted to share some opening thoughts and questions before I build the bones of a larger article in the future.

During this travel season, I remember seeing so many players that I had only previously seen at our camps in the fall. An impression can be made at any time, and it can last quite some time. If you feel like you may be being undervalued, there’s not a better way to prove it than coming out and playing well at a camp.