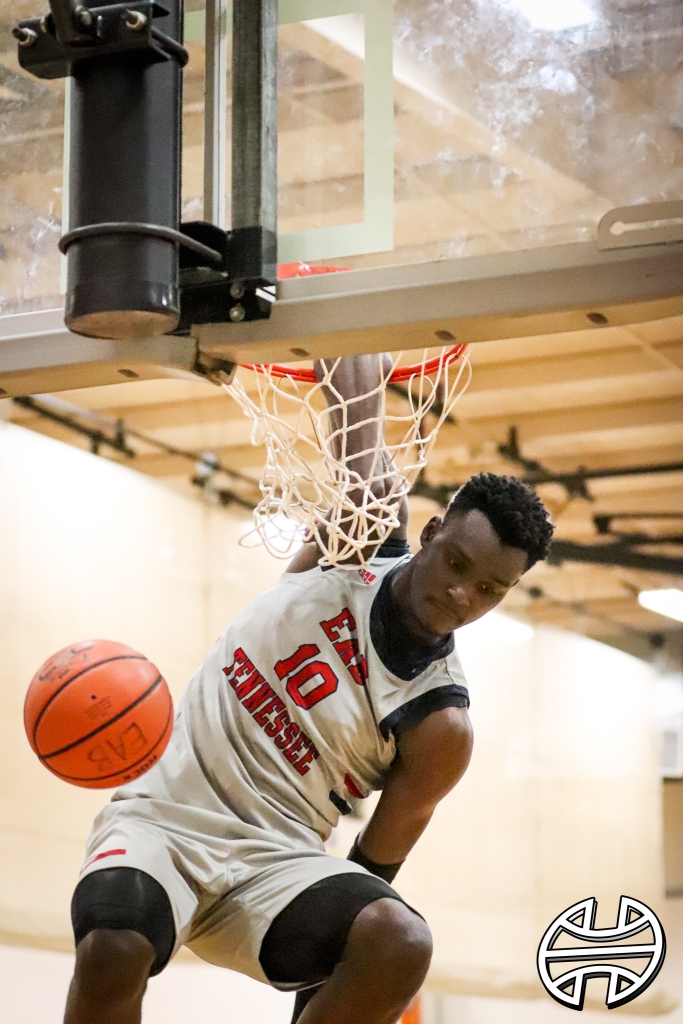 Lake Buena Vista, FL—The finale of the NBPA Top 100 Camp has wrapped. Championship Friday brought some intense matchups and big-time performances. Several players bolstered strong camps or closed things out on a high note. Let’s take a look at some of the day’s highlights.

Seeing two players take their matchup personally always provides great action. It adds some heat, some spice to competition, and we got that when Somto Cyril and Flory Bidunga went head to head to start the day.

The two physically-imposing forwards showed flashes of dominance throughout the weekend, but their biggest obstacles were each other. Watching the two back each other down and try to cram on each other was like watching an equally-matched sparring bout. Blow-for-blow, the two 2024 big men put on one of the most intriguing individual battles of the weekend.

Getting to see apples-to-apples comparisons provides a lot of insight into how good a player is, and these guys proved their mettle against each other on Friday morning.

Comeh Emubor must have hit a good cup of coffee or something this morning because he was ready to go for the morning session. The 6-foot-5 guard poured in 27 points and pulled 6 boards to start the final day of the NBPA Top 100 camp.

He had it all working this morning. His 3-point shot was falling, and he had little issue getting to the rim off the bounce. Emubor used his strong frame and physicality to his advantage throughout the game.

The North Carolina guard has been one of the camp’s top guards and will look to carry that momentum into July.

Boozers live up to expectations

In this world, there’s often much ado about nothing when it comes to the hype around young prospects, but the hype around 2025’s Boozer twins is very much warranted. I have gotten to see them in bits and pieces throughout various events, but this was the first time that I sat down to watch them specifically, and I’ll tell ya, these guys check all of the boxes for me.

What I’m still wrapping my head around is how advanced they are on the defensive side of the game for their ages. Cayden is an on-ball stopper, and Cameron is a high-level rim protector. It’s immediately identifiable how much defense means to the Boozers, which is mighty impressive for a pair of rising sophomores.

For their respective positions, the Boozers have all of the physical tools. They don’t look as young as they are. From a physical perspective, they’re as developed as most of their elder peers in camp. It looks like they can fit in on a college campus right now.

Skillwise, the Boozers are as well-rounded as they come, and that’s regardless of age group. They can both score consistently on multiple levels and clearly understand the game well. Oh, the benefits of good genes and being taught the intricacies of basketball since birth.

These guys are a shining example of why evaluators at the NBA level value prospects having former athletes as parents.

I had never seen Dennis Parker before Friday’s morning session, but he certainly left an impression on me. His 26-point outing was a statement that I close out the weekend. Parker is a 6-foot-6 forward with plenty of athleticism. He generated buzz from the stands with high-flying dunks and an acrobatic, 360 layup.

Even from across the gym, Baye Fall’s personality and enthusiasm are infectious. He loves being on the court, and it’s evident. He was also one of Friday’s best players. Fall’s length is hard to rival, and he uses it to his advantage on the glass. He’s among the best rebounders at camp. Fall gives all-out effort on the glass at all times. He’s also one of the camp’s leading scorers. Fall operates well around the basket and finishes well against equal competition. He should be a strong defender at the next level because of his motor and length.

Simeon Wilcher has had a good camp outing. He does a great job when it comes to balancing scoring and distributing. He’s a guard that’s more than capable of taking over a game and serving as the primary scorer, but he looks to get everyone involved, especially his bigs. He worked well with Flory Bidunga as an outside/inside duo.

I don’t think I’ve ever seen two people catch an alley-oop off the backboard and dunk it at the same time, but Isaiah Miranda and Brandon Garrison did just that on Friday. It was totally accidental, but it was pretty cool.

Taylor Bol Bowen was one of the more productive overall players of the day. His impact on the game is felt one way or another. Bowen is a big, lanky SF that makes plays happen from the wing or around the basket. At 6-foot-9 with exceptional length, Bowen pulled his fair share of boards as well. He’s perpetually a near-double-double guy when he takes the floor.