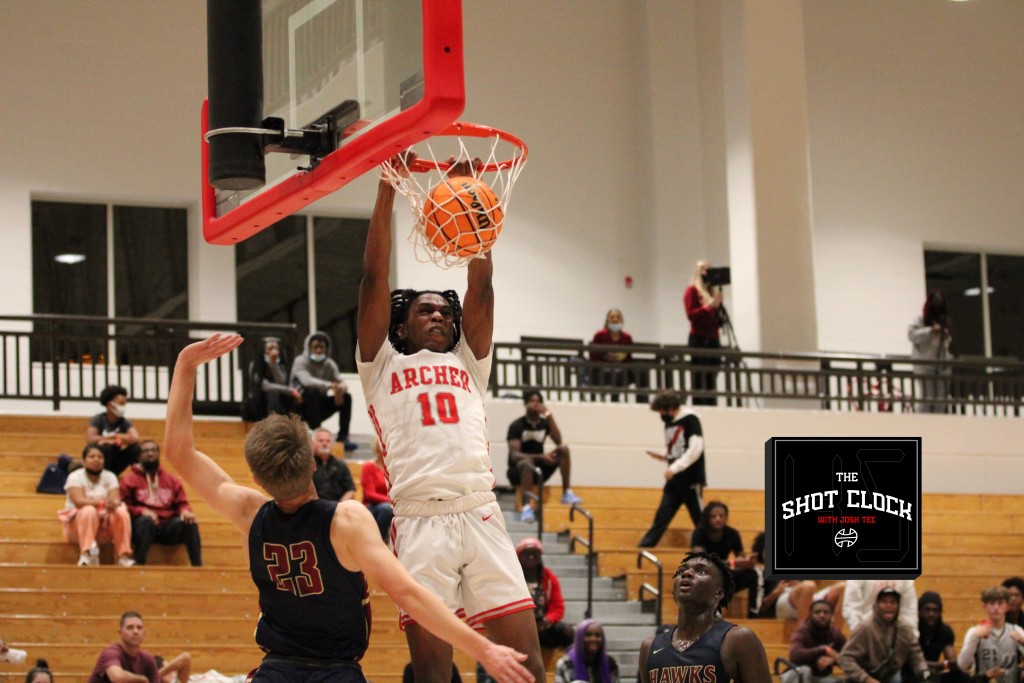 Gonzaga looks awesome again, UCLA and Villanova played a classic, the SOCON is whoopin’ on the ACC, Georgia State looks like the best team from—uhh—the state of Georgia, we have daytime hoops on at noon today, it’s getting cold out, and I caved and started to embrace Christmas earlier than I wanted to—I try to show respect to Thanksgiving and give it its time to shine. This is my absolute favorite time of year. I love the holidays, I love college basketball, and yes, I love the cold.

But, we’re not here to talk about any of that right now. This is about Georgia high school hoops, and I have plenty of that for you. So, if you want to talk college hoops, the holidays, dressing for the cold, movies, music, or whatever else, you can hit me up on Twitter, and I’d love to chat. For now, let’s look at the past week around the Peach State.

Scrimmage Recaps: I went to two scrimmages earlier in the week before the regular season tipped off. The first was GAC at Meadowcreek on Tuesday, and then, I went to River Ridge to watch the Knights take on Kell in a rematch from last season’s state playoffs.

GAC vs Meadowcreek: This game was the most entertaining of the scrimmages I went to. It was a scrappy, tightly-contested battle between two similarly-matched teams. Meadowcreek won it 64-61.

Wilson was the guy with who I was the least familiar. He’s a guard who seeks out contact on the drive and gets to the free-throw line with regularity. 11 of his 17 points came from the charity stripe, and he only missed one attempt from the line.

Keishawn Hampton is a lightning-quick guard who can catch fire from the 3-point line. He had a quiet night until the fourth quarter when the game was on the line. Hampton thrived under the pressure and scored 10 of his 12 points in the fourth quarter, including hitting two 3-pointers. Since this game, Hampton went on to have a game where he hit nine from beyond the arc. No, not nine points, nine threes.

Dayton Richardson is probably Meadowcreek’s best long-term prospect. At around 6-foot-6, he’s got next-level size and versatility. In this one, he hit two 3-pointers. Like Zay Wilson, Dennis Sturdivant made a killing at the free-throw line.

This Meadowcreek team has a multi-guard attack, they pressure you on defense, and they play with great pace. Their other talented forward, Eduardo Hendricks didn’t play in this game, but he’ll just add to their depth when he suits up for the Mustangs. They have a lot of juniors on their roster, so I’d say that they’re a year away from reaching their highest potential as a team, but they’ll be a team that’s going to be a tough matchup for anyone.

Bucknell signee Josh Fulton led the way for GAC. He was just tremendous. The 6-foot-5 guard poured in 22 points and proved to be nearly unstoppable all night. He’s going to be one of the state’s must-see seniors throughout the year.

I loved GAC’s Eddie Page. He showed flashes of dominance during this game. He’s a load down on the block, and he’s a guy who wants to dunk everything.

GAC is going to win a lot of close games this year. They’re tough and gritty, and they have a star in Josh Fulton.

Kell vs River Ridge: These two teams last played in the first round of the 6A playoffs last season. River Ridge nearly upset Scoot Henderson and the team that eventually played for the state title. Kell took this scrimmage too. The Longhorns left River Ridge with a 57- 44 win.

There were times throughout the night in which Smith looked like he was ready to step into the spotlight and be the star of this team. At the end of the day, the Longhorns will likely win by committee though. Smith, Parrish Johnson and Dylan Cambridge are all capable of driving the charge for Kell. This is a stable of athletic guard-wing combos who thrive in transition.

Peyton Marshall is young and raw, but he has one thing that you can’t teach: size. A mountain of a man, Marshall is going to give everyone fits this season.

2024 guard Jaylen Colon will have his share of big games as well. He’s one of the best young shooters in the state.

While they didn’t win, I still left the game high on the Knights. Having Hansraj and Kopf produce the way they did gives me hope that my Final Four prediction for River Ridge was a good one because the Knights’ two bigs didn’t play their best games.

There were times in which 7-footer Braden Pierce looked dominant, but he was hampered by foul trouble. He finished with 8 points and 3 blocks. I expect this to be on the lower side of his stat lines throughout the year.

Jared Russo just missed some shots that he otherwise makes with consistency. He finished the game with double-digit rebounds though.

Tigers Trio Leads in Season Opener: I took an impromptu trip to Archer for their season opener against Mill Creek on Thursday. This was a day that I had planned to devote to school work but screw it. It’s basketball season, and I have an insatiable itch to be in the gym.

Archer opened their season with a 58-48 win. As you might have assumed, this was a defensive battle. Archer is a team that wants to win with their defense, and they did just that on Thursday.

It was the Tigers’ three-headed guard trio that led the way in the win. Christian Drummer and Damoni Harrison each finished with 13 points while Major Freeman added 12. When these three are on the floor together, Archer is at its best. They’re all switchable defenders, and they can each handle the ball and make plays.

This trio led the way for them in their first game of the season, and they’re a major reason why I’d put money on this team making some noise in the state playoffs.

DT Invitational: I was at the DT Invitational all weekend, and I have a ton of notes to sort through, so I’m going to publish a recap of that later in the week. It was too big of an animal to tackle here.

Where in the Peach is Josh Tec?: Here are my current plans for the week:

Monday: Hillgrove at Allatoona. This is going to be a battle between two interesting Cobb County teams. Hillgrove has a new staff and a revamped roster, so I’m eager to see how it all works together this early on in the season. The Hawks picked up a win over Hiram to start their season, so things are off on the right foot for the new regime.

Allatoona has some interesting pieces. I expect them to be a contender to make the state playoffs. The Bucs are a team that’s going to defend and play a physical style of ball. Last year, they had a bit of an old-Big-East vibe about them, and I assume that’ll be the case again this year.

Tuesday: River Ridge at Etowah. I can’t wait for this one. These are two teams that I have in the top-10 of their respective classifications. I got to see River Ridge this past week—read above—but I’m excited to see them play a regular-season game.

Now, Etowah, they’re a dark horse to make the Final Four for me. We all know how tough 7A is, but this is a team that could surprise a team that overlooks them. River Ridge is a great team for them to test themselves against early in the season. The Eagles have already gotten a dominant win over Creekside.

Wednesday: There are a couple of options on my calendar for Wednesday, but I think I’m ultimately going to decide on going to Milton to see them take on Roswell. I’ve written about Milton, their deep talent, and their expectations plenty of times. They’re the class of the entire state, they have a roster filled with some of the best prospects in the state, and they’re firmly in the national conversation as well.

Roswell is a state tournament team without a doubt. The Kemp twins can absolutely torch the nets, Quinton Partee is like the Draymond Green of this team, and Jase McCullough is one of the really nice prospects in the loaded 2023 class. While I expect Milton to win this game, I also expect Roswell to have a great season, so I can’t wait to see how they stack up against the best of the best.

Who knows, maybe I’ll be able to fill some of the empty days. Let me know if you have a game on Thursday or Friday.

New Column: Now that the season has started, I’ve realized that I have too many notes to unload in one column. So, every Monday I’ll drop the Shot Clock where I’ll cover major news and notes from the previous week as well as weekend game recaps. Fridays will feature a Fistful of Notes now too. This will primarily be a space where I open up my game notes from the week up to that point. It will also be a space where I can preview the weekend’s slate.

What to Watch for: This week, I’ll be opening up my notes recapping the DT Invitational, I’ll be highlighting some of the state’s top remaining seniors, and I’ll drop a Fistful of Notes on Friday. So, you should be hearing from me every day until the weekend. Make sure to keep an eye out for all of the content I have coming your way.