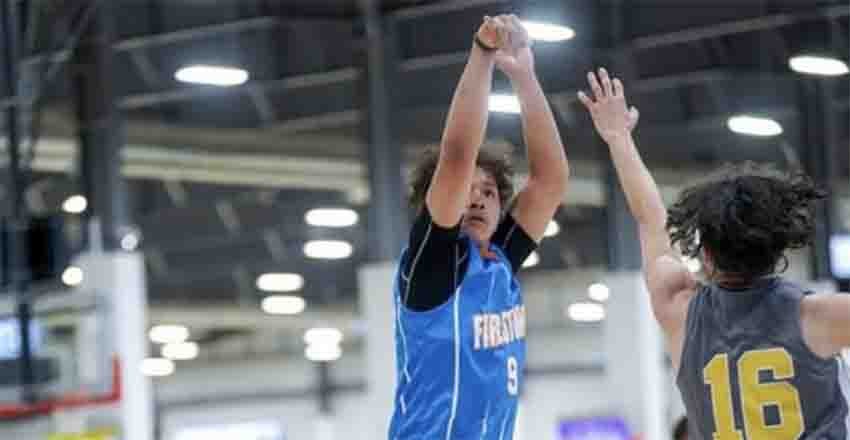 There are very few teenagers/players in grassroots basketball that have figured out the equation of being able to be their fun-loving selves that are everyone’s friend off the court while being a player ready for war when they step in between the lines.  In between four lines where they don’t see anyone as a friend and they, themselves, become a cold stone killer.

That is something AZ Firestorm Elite’s 6’2” combo guard Andrew Camacho has learned and mastered at a young age.  The kid is just a flat out baller, an assassin.  A sniper from deep that can carve up a defense with the ball in his hands.  He has no fear of going to get his and beat you with his precise outside shooting but has no problem at all with making everyone else around him better and finding the open man and getting his teammates open shots.

If you never lined up against him, he might fool you.  He is not a high flyer.  He is not lightning quick.  He does not stand 6’6”-6’7”.  But he can PLAY.  He plays winning basketball.  He plays in a way that makes it really hard for a coach to take him off the floor.  He plays the game the right way.  He does not turn the ball over much at all.  He hits shots.  He will oftentimes lead your team in assists and it is not very common for him not to be the smartest player on the floor.  Oh, and he carries a 4.0 unweighted GPA.

With the combination of his skill on the court and his performance in the classroom, it is no surprise that he has aspirations to play basketball in the Ivy League.  Most recently, he has been in contact and actively being recruited by Princeton and Dartmouth.

Most teenagers playing basketball at a Division I level right now don’t really have an idea of what it is they want to major in college, much less what they want to do AFTER college.  Andrew does not have that problem.  He knows exactly what it is he wants to major in and what he wants to do with his life.  He knows he wants to get in the medical field and as of now, he wants to get into the field of dermatology, citing some classes he has taken recently in his interest in the treatment of the skin and his passion for helping people.

While his future outside of basketball has developed itself as of late, basketball has been in his life for as long as he can remember.  His big sister, Alexis, was a star player at the same school he has become the ‘big man on campus at, as a Peoria Panther.  His father, Martin (along with his uncle) has created one of the most successful youth basketball programs on the West Coast in the Arizona Storm.  He has been raised in a basketball gym.

His career at Peoria High has been an impressive one, to say the least.  As a freshman, he started for a top-seeded team that made it all the way to the state championship, losing in a tough overtime game to Salpointe Catholic.  He was huge for the Panthers in that run to the final game.  That team lost a lot of seniors and the team did not see the same success.  However, Camacho led the team in just about every statistical category.  In his sophomore season he averaged almost 19 points, 7 rebounds, 4 assists and 2 steals per game.  This past season, Camacho REALLY opened some eyes with some crazy performances when Peoria was playing against their toughest opponents.  He led Peoria back to the state playoffs on a team that started two freshmen that were two of their most productive players.  That was because Camacho poured in nearly 27 points, 4 rebounds, 4 assists and 3 steals per game.

He and his Arizona Firestorm Elite team, that is filled with some of the state's top 2023 prospects, are all in their final round of AAU basketball.  They recently took home the Hoop Seen Cactus Classic championship by annihilating the field.  Camacho was probably the best player in the entire event that weekend.  They will continue to compete in the Adidas Gold circuit for the summer and will be attending the Magic Memorial tournament at the tail end of this month.  They should have a ton of college coaches sitting courtside for their games in the July live viewing period.

When the lights are not on, Andrew is currently working on his athleticism and improving his physicique because he thinks that is what will take his game to yet another level.  One thing is certain, the kid works hard AND plays hard and he is really hard not to cheer for.  We are behind you 110% over here, Mr. Camacho.