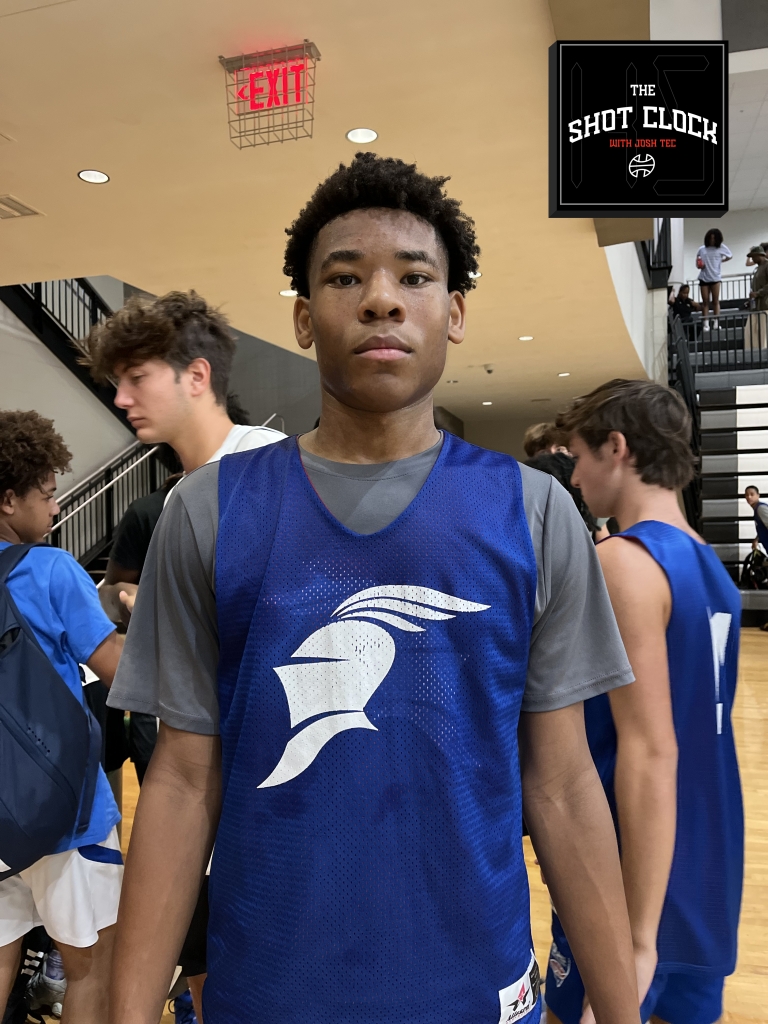 Happy Monday, everyone! It’s been a busy week here at HoopSeen HQ, and we’re going to start off another busy one with a loaded edition of The Shot Clock.

I’ve been to some open gyms, fall leagues and camps throughout the week, and I’ll be unloading some notes from my time on the road.

With college coaches hitting the road in full force again, workouts across Georgia will be popular destinations. Plenty of coaches have already dropped in on their most sought-after recruits.

As a weekly segment for the remainder of this recruiting period, I’ll highlight some of the hotspots around Georgia that drew coaching traffic.

Here are some of the schools that have made trips to the Peach State this week:

I was at TSF for their workouts on Wednesday. Kansas’ Bill Self was there with an assistant to see Kaden Cooper. The Jayhawks weren’t the only school that stopped by to see Cooper. Oklahoma also came by to see Cooper.

Lathan Sommerville got a visit from Virginia Tech while I was there. The big, 6-foot-9 forward is one of the risers in the 2024 class that should keep climbing. He had an impressive day.

Georgia native Jeremiah Wilkinson saw Mississippi State pay him a visit. The Bulldogs have been hitting the Atlanta area hard this week, and Wilkinson appears to be a priority for them.

UNF, Dayton and USF were also in attendance.

Myles Che was one of the focal points and left with an offer from Vermont.

Before publishing this, I went to Grayson’s open gym, and Gicarri Harris drew coaches from Purdue and LSU.

While in the area, LSU will also be stopping by McEachern, Kell and Shiloh.

As one would expect, Pace has been drawing a crowd. Per Coach White’s twitter, Southern Illinois, Mississippi State, Tulane, Clemson, USF, Mercer and Georgetown have stopped by workouts within the last week. The Green Wave have extended offers to 2024 G KJ Greene and 2025 G Eric Chatfield.

On Tuesday, I’m planning on heading to Wheeler for their workouts, so stay tuned for updates from my visit to Holt Road. The Wildcats have garnered plenty of attention from coaches already and should remain a hot spot through this recruiting period.

Check back here next week for another round-up of which schools pop up around town.

Notes from a busy Saturday

Before driving to Huntsville to stay the night ahead of HoopSeen’s Alabama preview camp, I hit the North Atlanta fall league and SEBA’s All-Star Shootout. Both great events, I left with a fistful of notes from a busy day.

Starting with North Atlanta’s fall league, it was an awesome opportunity to get eyes on some players and teams that I hadn’t seen in months.

Wheeler had a nice outing without Isaiah Collier and Jelani Hamilton in the lineup. Of course, Arrinten Page dominated the game at times, but he didn’t need to do a ton because of the Wildcats’ depth. It wasn’t an incredible game for evaluation because they overwhelmed. Everyone had nice moments essentially.

Kota Suttle and Nate Earl will help keep Wheeler a power beyond the departure of their talented senior class. There’s tremendous potential in that 2026 backcourt. One guy that showed signs of adjusting well to the roster was Ricky McKenzie. After transferring to Wheeler from The Walker School, the 2024 guard had to acclimate to new surroundings. He’s a terrific scorer and with more time in his new setting, he should become a bonafide weapon for Wheeler.

Another backcourt that impressed was Riverwood’s. Karris Bilal and JR Leonard should each have monster seasons for the Raiders and help take the team to the next level in terms of overall success.

Bilal is an explosive athlete and scorer. He gets plenty of deserved praise in that regard, but it was his defense that stood out on Saturday. He made some savvy plays on that end of the floor that led to steals or deflections. Bilal was intense and locked in on that side of the ball.

A 2025 guard/wing, Leonard looks to be one of the state’s better prospects in that class. He was great as a secondary creator playing off of Bilal and can run the show well when needed. Leonard was most impressive when attacking on drives from the wing. He burned his man at will and got easy shots at the rim. He’s a player that should break out in a major way this season.

In the same game, Mt. Bethel’s Mo Diao played well at the forward spot. 6-foot-8 and long, Diao was a disruptor on defense and a vacuum on the glass. He looked comfortable when grabbing a rebound and initiating the break himself. With his physical tools, coaches out there should be getting eyes on him.

After leaving North Atlanta, I went straight over to Pope for SEBA’s camp.

Justin McCarter left an impression on me after watching him in July at Best of the South, and he did so again on Saturday. He’s a 6-foot-5 guard that does a little bit of everything well. He’s a solid scorer from multiple levels, and he was a leader and great teammate at camp. Where he shined most was in his passing. He distributed the ball well and was generous when it came to setting guys up with opportunities to be successful. Have you ever been to a basketball camp? That doesn’t necessarily happen all the time in those settings.

Another summer riser who impressed was AJ Patterson. He was also a pass-first guy at camp when he could have dominated with his scoring. Patterson was intense on defense as well. That’s what I walked away having noted above all else. He played with energy on that end of the floor which led to multiple blocked shots and overall disruption. I’ve written about it multiple times at this point, but Patterson should have an eye-opening season at Mount Vernon.

Consider this a warm up to a week’s worth of content from our Alabama preview camp. It’s always a pleasure to come to visit my neighbors to the west. I look forward to HoopSeen visits to Bama whenever they’re on the calendar.

This year’s Alabama preview camp was another great one. HoopSeen will be publishing breakdowns of each team and evaluations of each player, but as an appetizer, I wanted to briefly delve into some of my favorites.

Kaden Justice was one of the first players I noticed. While I was preparing my notes and players were filing in, Justice was throwing down impressive dunks in warmups and burning the net from 3-point range. That’s essentially what he did for the remainder of the day too. He was one of the better players in the building.

This is an obvious standout for most, but RJ Johnson had a great afternoon. The Alabama commit was a head above most athletically and skill-wise. His leadership and intangibles were fully on display too, and that’s what I enjoyed watching the most. He was out there having fun and encouraging his teammates. That’s what it’s all about in my book.

We’ve already seen quality middle schoolers at the NextGen camp, we’ve seen some of Alabama’s best, and we’re looking forward to continuing our run through the southeast in South Carolina this coming weekend.