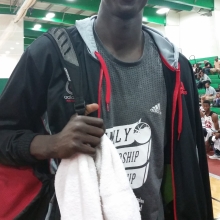 Big news coming on the NBA front as Thon Maker has been deemed eligible for the 2016 NBA Draft this June; further, he has hired an agent, paving a way for future fifth year prospects out of the prep ranks to jump right to the pros.

Last night, Thon Maker announced that he would jump right to the NBA and forgo a year of college beforehand. One of the more polarizing prospects that we have seen for some time now, expect that to be the case for NBA scouts/front office members over these next few months. An interesting jump straight out of the prep ranks; could be a pioneer in doing so for future cases.