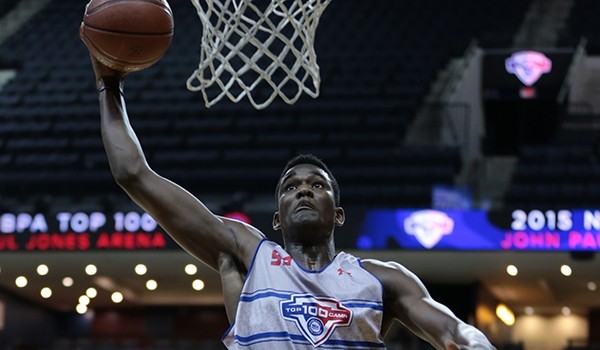 Day Two here at the NBA Top 100 camp was a mixture of size and major match-ups. Here’s a quick rundown from Justin Young’s point of view.

Edrice Adebayo destroyed the competition on Thursday. The cut-from-granite big man has a game very similar to NBA PF JJ Hickson. Adebayo was a mixture of excitement, wow, production and power. This is the NBA camp and Adebayo looks and plays like one in this setting. Hard to be better than that.

Future Villanova player Omari Spellman went to work on Thursday morning. The big man, and emphasis on big, was paired against some of the camps heavy-hitters and pushed defenders off the blocks with ease. In turn, he scored time and time again in the paint with little to no trouble. He was incredibly effective against Adebayo and Chris Lewis, two of the strongest players in the camp. Spellman finished with a loud 20 points in the match-up.

Deshawn Corprew is keeping the stat crew on alert this week at the NBA Top 100 camp. The 6-foot-4 slasher has shined in the transition game and shining as a driver. The Quality Education (N.C.) wing is one of the few players here at the camp that lies outside of a lot of top 100 national lists. He’s been one of, if not the very best, outliers at the camp. Will his play change the minds of the opinionators?

DeAnde Ayton showed a sampling of all of his talent. The big man from San Diego stretched out on the floor and guarded the point when he switched on pick and rolls. He kept plays alive with his soft hands and active effort to keep plays alive that he converted to a score. Offensively, Ayton has been at his best from the elbows, knocking down jumpers on both sides of the floor. It is easy to see why many believe the 6-foot-10 forward is the best amateur basketball player in the world.

The match-up of class of 2017 elite prospects Jarred Vanderbilt and Michael Porter was a push. Both had their moments in the match-up. Porter finished with 11 points while Vanderbilt four points, six rebounds and four assists. Both showed different parts of their uber-talented games.

Alterique Gilbert creates so well and gave opposing point guards fits with his tight handle, deliberate first step and power cross-over. Good luck trying to him in front of you defense. Gilbert will torch these types of match-ups.

Memphis point guard Jaylen Fisher got the rim whenever he wanted. And he did that a lot.

Gary Trent, Jr. was outstanding in Argentina for the United States U16 squad. He was named MVP of the FIBA Americas. Here at the NBA Top 100 camp, he’s dialed in from deep and terrific off the bounce.

For two straight sessions, future Virginia point guard Kyle Guy has been nothing short of fantastic. The 6-foot-2 guard from Indiana is crafty, confident and creative with the rock in his hands.