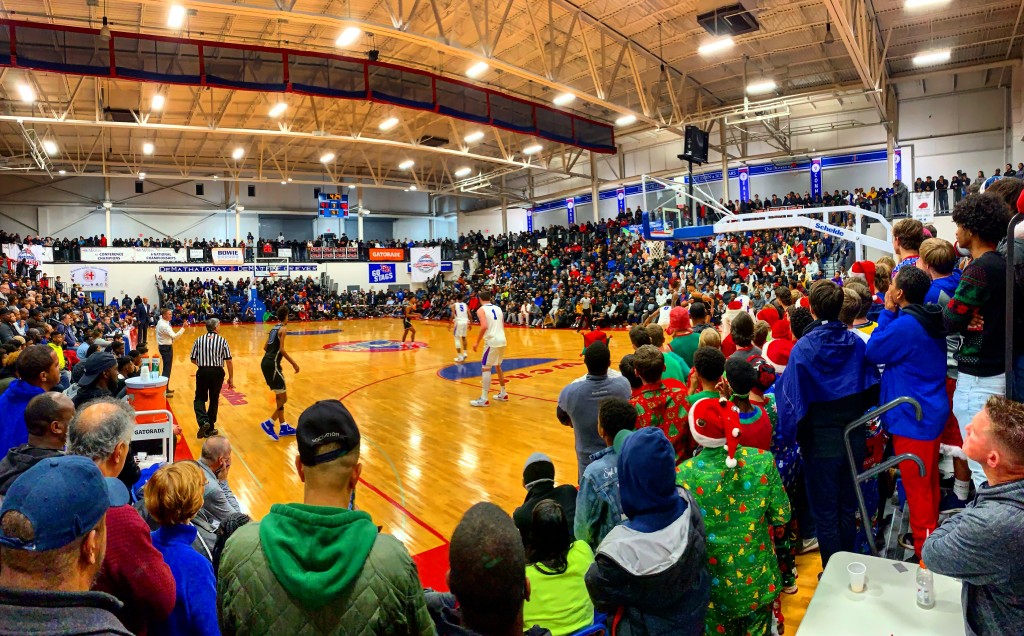 HYATTSVILLE, MD - The 2018 ARS Rescue Rooter Washington DC HoopsFest may go down in history as a thing of legend. Yes, the games were good. They should be. But the crowd and the lack of real estate inside the gym DeMatha Catholic raised the energy levels.

For the festive holiday crowd that packed into the building, well, they were treated with all kinds of hoops goodies on Saturday.

Two of the best programs in the DMV took on two Florida powerhouses.

In the end, the advantage went to the state of Florida. IMG beat host DeMatha 75-68 and Montverde beat Paul VI 57-50.

On the high school side of things, there was a shift on Saturday. The homegrown squads had their hands full with the recruited rosters from Florida.

Suffice it to say, wherever the talent came from there was plenty to be found.

The nationally recruited powerhouses from Florida went 2-0 against two of the very best teams from one of the very best basketball hotbeds in the country. But the prep schools had to fight to get the victories. They had to do it in front of one of the best basketball crowds you’ll ever find on the high school season circuit. These are smart fans, passionate fans. Winning in the DC area is a test of your talent and your mental toughness.

We all won for seeing it in action. There were roughly 30 future Division I players on the court in these two games. That’s an insane amount of talent for two high school games on a December evening.

That’s why people stood in long lines on a winter night just for the hope that they get in to see the action.

HOW IMG DID IT…

Yes, IMG won as a team. But Robinson-Earl was the best player on the floor in the epic Florida vs DC games. The future Villanova forward was Mr. Everything on a night he needed to be Mr. Everything.

He finished with 26 points on 11-18 shooting from the floor. He also ripped down 13 rebounds. DeMatha didn’t have an answer for him. Robinson-Earl owned the big stage and put his team on his back in the second half.

Armando Bacot, a Virginia native, looked great physically and made his mark inside. The future North Carolina big man scored 12 points and grabbed 13 rebounds. He also had three blocks.

Guard Noah Farrakhan scored 15 and Jaden Springer had 14 in the win.

DeMatha had a brilliant effort from junior Earl Timberlake, Jr. The 6-foot-5 slasher finished with 20 points and eight rebounds in the game. He was the best player on the floor for the Stags. Villanova bound guard Justin Moore scored 16 points while Hunter Dickinson had nine points, 10 rebounds and three blocks.

HOW MONTVERDE DID IT…

Montverde was down 10 at the half to a scrappy Paul VI team after 16 minutes of play in a very pro-VI crowd here in the Washington D.C. area. Paul VI was hitting threes, their guards were making creative and energetic plays with the dribble.

Paul VI had the moment and the crowd.

But with a team like Montverde, you better believe the Eagles aren’t going to lay low and not respond to being up against the ropes. They’d come back. But they’d have to be really good to do so.

They were. Especially 2019 guard Harlond Beverly. The Michigan native scored 20 points on a perfect 9-9 shooting from the floor. He helped lead the comeback and spearheaded the 20-6 third quarter in favor of the Floridians.

Beverley played the role of a top 100 national prospect in this game. He had some help from Precious Achiuwa, one of the top overall players in the country. Achiuwa scored 13 points in the game, with 10 coming in the second half.

Paul VI had a monster game from junior guard Josiah Freeman. With Jeremy Roach and Anthony Harris out with knee injuries for the season, someone from the Virginia powerhouse had to step up against No. 1 Montverde. Freeman did. He went for 20 points in the first half, hitting five of seven triples. He was unstoppable. Freeman finished with 24 points and six made three-pointers.